Exploring how traits stay or go on plant’s evolutionary journey

An often-studied flowering plant evolved reproductive self-sufficiency, and in the process some parts of the flower are starting to disappear. Michigan State University scientists will use a $1.5 million National Science Foundation grant better understand this trait loss. 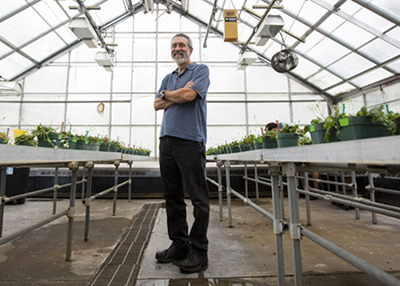 Jeffrey Conner, a professor in the Department of Plant Biology in the College of Natural Science, an MSU W.K. Kellogg Biological Station faculty member and the grant’s principal investigator, explains that one of the most common changes that flowering plant species undergo is to evolve from cross-pollination to self-fertilization.

A self-fertilizing plant can reproduce even if pollinators like bees are scarce or other members of its species aren’t nearby. A single seed can successfully colonize a new location with genes from the single plant. Evolutionarily, it can be a big win since it doubles the fitness benefit of each offspring plant.

Some populations of Arabidopsis have in achieving self-fertilization lost short stamens, which produce pollen in flowers, because only the long stamens in the flower function in self-fertilization. What Conner and his collaborators Rob Last, Barnett Rosenberg Professor of Plant Biology; Gideon Bradburd at the University of Michigan; and Tom Juenger at University of Texas, Austin, want to understand is what nudged the model plant Arabidopsis to lose short stamens in only some circumstances. This would give new understanding to how the evolution occurred.

The plant’s native habitats are in Europe, western Asia, and northern Africa, and short stamen loss is only common at low altitude in the southern part of the plant’s native range. The prediction, Conner said, is that the overall contribution of short stamens to reproduction is less in these populations than at high altitude and latitude.

To read the full story, visit the College of Natural Science website.