Helping an oilseed take off as a sustainable fuel source

MSU earns $2M DOE grant to improve the oilseed yield of Camelina sativa, a common plant that could provide cleaner jet fuels and teach us about other important crops

Researchers at Michigan State University are working to clear the runway for a new source of cleaner, more sustainable biodiesel and jet fuels derived from a relative of cabbage and cauliflower.

With $2 million in funding from the U.S. Department of Energy, MSU scientists are helping unravel the complex genetics of a plant named Camelina sativa. This knowledge will better equip researchers to improve the plant’s oilseed yield and establish it as a more viable alternative to current petroleum-based fuels that meet the unique demands of air travel. 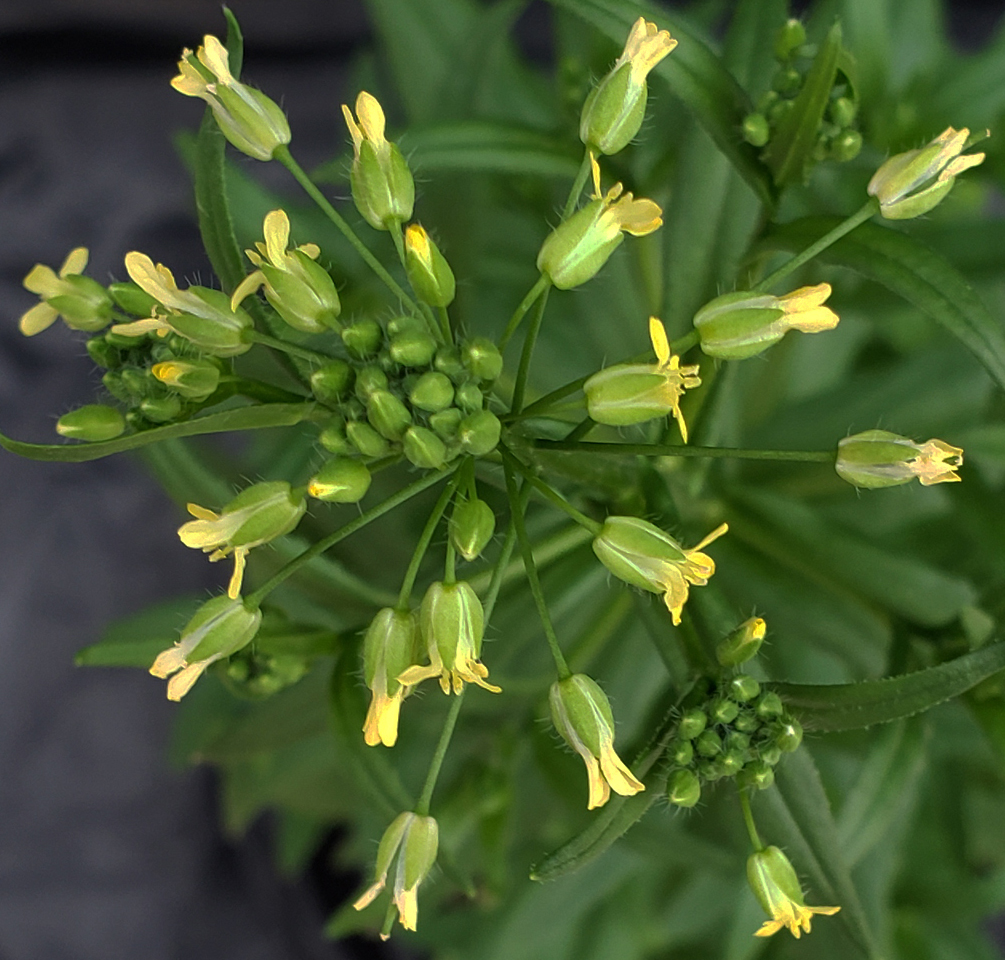 Camelina sativa has the potential to provide a sustainable source of jet fuel and help scientists better understand other crops. MSU researchers are probing the plant’s genetics to help realize that potential. Credit: Suresh Kumar Gupta

“We might have electric and hydrogen-powered cars, but we’re not going to have electric or hydrogen planes anytime soon,” said Erich Grotewold, a professor in the College of Natural Science and the Department of Biochemistry and Molecular Biology.

Meanwhile, camelina oil is already found in some fuel blends used for transportation.

Furthermore, the tools and techniques developed by the MSU team will be applicable to a wide range of other important crops, said the project’s coleader, Patrick Edger, an associate professor in the Department of Horticulture.

“Camelina is the right system to be working on for developing improved biofuels. It’s going to be an instrumental crop for sustainability,” said Edger, whose lab is in the College of Agriculture and Natural Resources. “At the same time, all of the major discoveries we make will translate to other important crops.”

This isn’t Grotewold’s first time working with camelina. In fact, he’s currently part of another DOE project that launched in 2017 aiming to boost the plant’s yield. But it became evident there was a ceiling to the research without a more comprehensive way to study the plant’s genetics.

“A couple of years ago, I started talking with Pat and it became clear that his lab has a number of interesting tools and lineages that complement what we have in mine,” Grotewold said. “We felt we could advance the camelina research field by better establishing the plant as a model system.”

The DOE agreed, awarding the MSU team the new $2 million grant. The project aligns with the agency’s goals related to camelina specifically and, more broadly, to empower research into plant systems with applications in energy and bioproducts, said Catherine Ronning of the DOE Office of Science.

“We were looking for innovative approaches to increase efficiency in determining the molecular function of previously uncharacterized genes thought to play a role in important processes,” said Ronning, a program manager with the Office of Science’s Biological and Environmental Research program.

“I am beyond excited about this research and collaborating with the Grotewold lab,” Edger said. “It’s going to let us answer questions together that we couldn’t individually.” 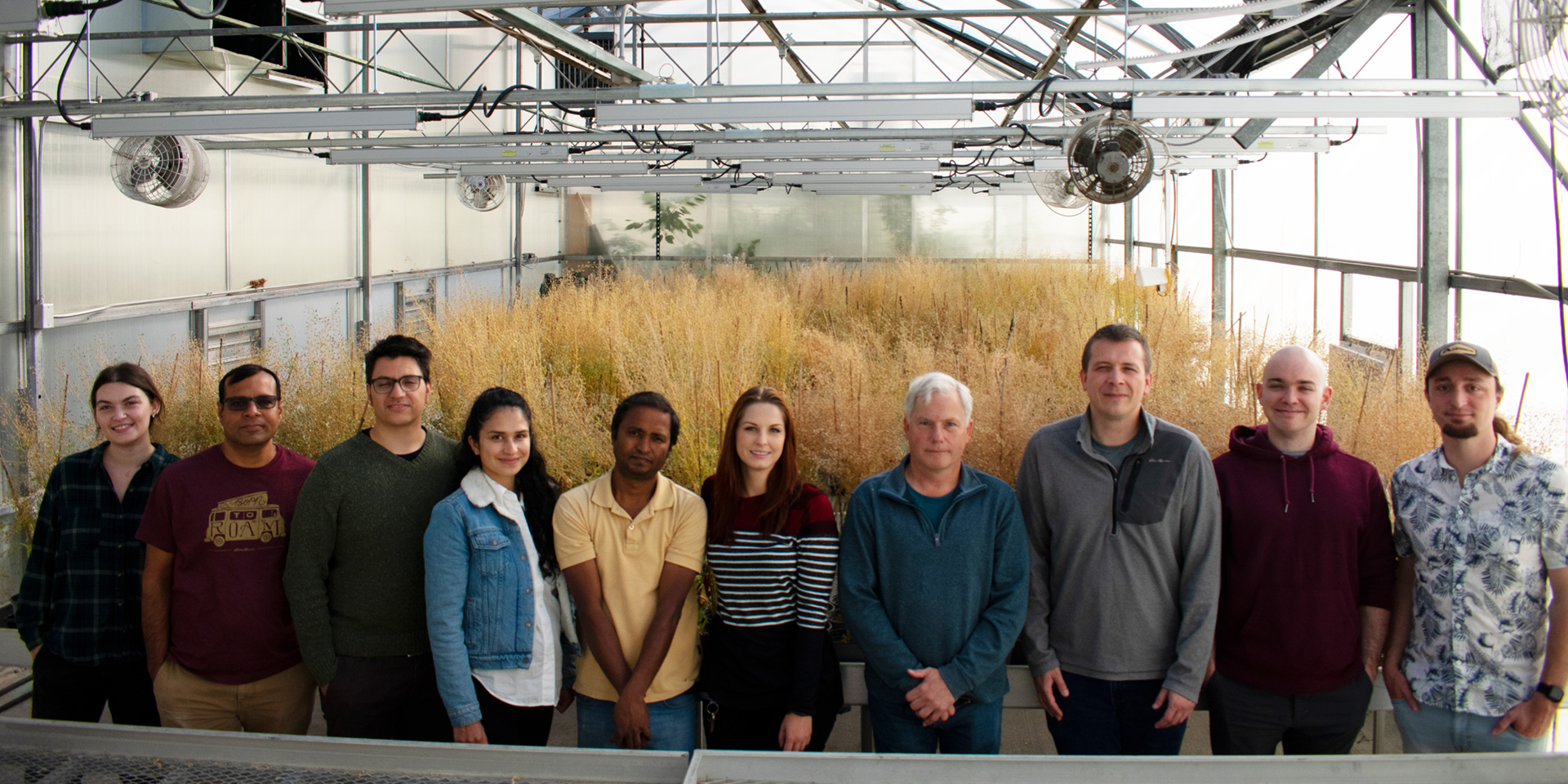 One of the biggest challenges presented by camelina is that its cells contain a relatively large number of copies of the plant’s chromosomes, the packages of DNA and proteins that carry genetic information.

Most human cells have two copies of each chromosome (ova and sperm are the exceptions, which both have just one copy). Camelina cells have six.

To understand how that complicates things, Grotewold has an enlightening analogy. A cell’s DNA can be thought of like a building’s wiring. If human cells have one set of wiring, camelina’s have three different, interconnected sets.

The wiring energizes circuits with specific functions — lights, for example — which are analogous to genes. And, like lights, genes can be switched on and off.

The MSU team is developing new ways to better understand how the wiring, circuits and switches work together to produce seed oil and power other important functions in the plant. Oil from Camelina sativa (shown left) could provide a clean and sustainable source for jet fuel if researchers can boost the plant’s productivity. Credit: Bliesgauoele via Wikimedia Commons (field)/Eric Masur via Unsplash (airplane)

“It’s like trying to figure out how to get the lights to turn on in a specific room on a specific floor of a big building,” Grotewold said. “We won’t get there just by looking at the wires themselves. We need the building’s entire blueprint and, even then, we’ll probably need to play with some switches.”

Camelina is so complex that the MSU researchers won’t be able to create the entire blueprint themselves, but they won’t have to. They’ll be sharing the tools, techniques and knowledge they develop so other researchers can better study camelina and other polyploids, organisms that have more than two copies of each chromosome.

Currently, the best studied model organism in the plant sciences is thale cress or Arabidopsis thaliana, which is actually a close relative of camelina. Yet thale cress cells, like humans cells, have two copies of each chromosome.

Edger and Grotewold’s genetic studies will establish camelina as a better model for understanding other polyploid plants, which include many important crops.

“For genetic analysis, polyploids are difficult, but as crops, they’re far more adaptable and resilient,” Edger said. “Humans selected and domesticated polyploids, unknowingly, as many of our major crops that we use in our daily lives, including wheat, potato, cotton, coffee and strawberry, among dozens of others.”

Today, MSU’s research into camelina’s genetics has the potential to improve the yield of camelina oilseed, but also boost the beneficial properties of other crops.

For all of this promise, it seems only fair to mention camelina’s limitations. Although camelina seed oil does tolerate high temperatures well, Edger doesn’t currently recommend it as a cooking oil.

“I make popcorn almost every night and camelina is an awful oil to use for that, unless you like popcorn that tastes like Brussels sprouts,” Edger said. “I’m sure there’s the right dish out there for camelina oil. I just haven’t found it yet.”