Parisa Ghaderi is an assistant professor of graphic design in the Department of Art, Art History and Design in the College of Arts and Letters at Michigan State University. She shares her experience as an Iranian scholar and artist in the United States and how the current protests in Iran have made an impact on her teaching and art. As I entered one of my classes recently with swollen eyes, a red nose and a raspy voice, I faced my students and said, “As instructors, we are supposed to leave everything behind the door when teaching, but today, I cannot do so.” They all looked at me with their shiny eyes. Then, I played a short video from the past few weeks in Iran. They could see young, beautiful protestors about their age with the same hopes and dreams for a better life.

On Sept. 16, the death of Mahsa Amini, a 22-year-old Kurdish Iranian woman killed by the morality police while in custody, sparked massive protests and the government crackdown on protestors, many of whom have been beaten, shot and killed, especially minorities such as Kurds and Baloch people.

I talked about their superpower as artists and designers and how they can use their art to make an impact to create change, even if it involves the life of only one person. I encouraged them to see art beyond the walls of galleries and commercials and as a tool to promote peace and connect people worldwide. Before anything else we’re all human and we must go back to our humanity as a compass to ensure we stand with the oppressed, not the oppressors. I tried not to cry while I talked, but I wanted to be vulnerable. Courage comes from vulnerability. I am devastated, but I feel courageous.

Since Sept. 16, my second job has been watching the news, following every post on social media, attending every event and protest, and trying to be involved in different activities to raise awareness about tragic events in Iran. Instagram has become my second home to read, share and engage with many people. There has been so much inspiring and poignant protest art on social media, even by international artists addressing the “women, life, freedom” slogan to show their support for the Iranian people. So many artists, influencers, politicians, activists and athletes have cut their hair in solidarity with the women of Iran. 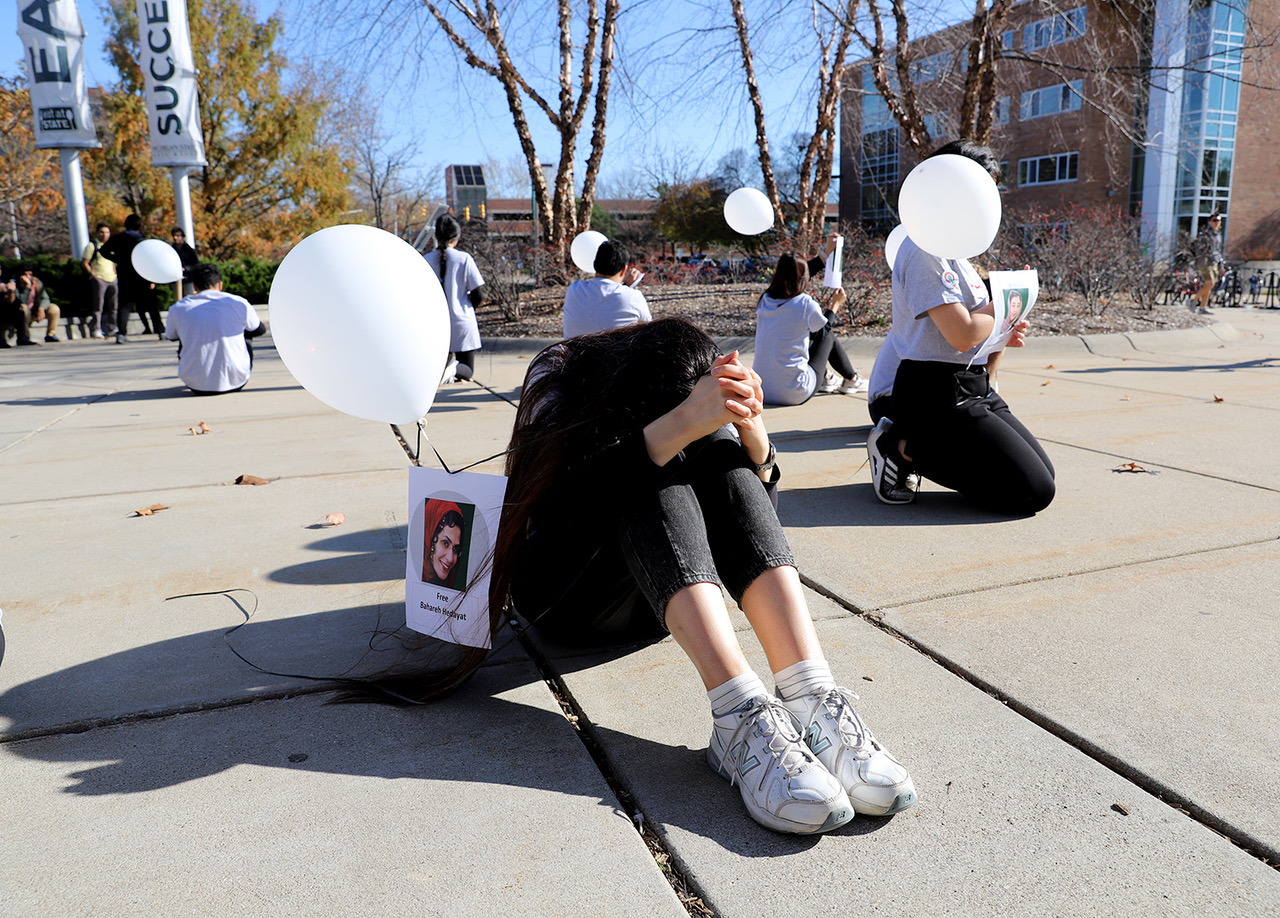 Performance by Parisa Ghaderi for Iran prisoners and detainees on Nov. 10 in front of Brody Hall. Photograph by Shirin Abedinirad.

For many Iranian women, cutting off hair — a sign of beauty that is decreed to be hidden in the Islamic Republic — is a poignant form of protest. According to Shara Atashi, a writer and translator, women cutting their hair is an ancient Persian tradition when the fury is stronger than the power of the oppressor. There are shocking images of public art, such as fountains that have been dyed the color of blood, across Tehran and songs and performances to communicate the message of this movement.

Living in the diaspora, I know my share is trivial compared to all the brave souls risking their lives, but I also want to use my superpower. I have worked with MSU’s Iranian Students Association, or ISA, to create art-related events such as T-shirt and pin-making workshops, design posters and direct a silent performance that was well received by the community. These activities were cathartic for the people involved, giving them space to mourn collectively when home is far away. 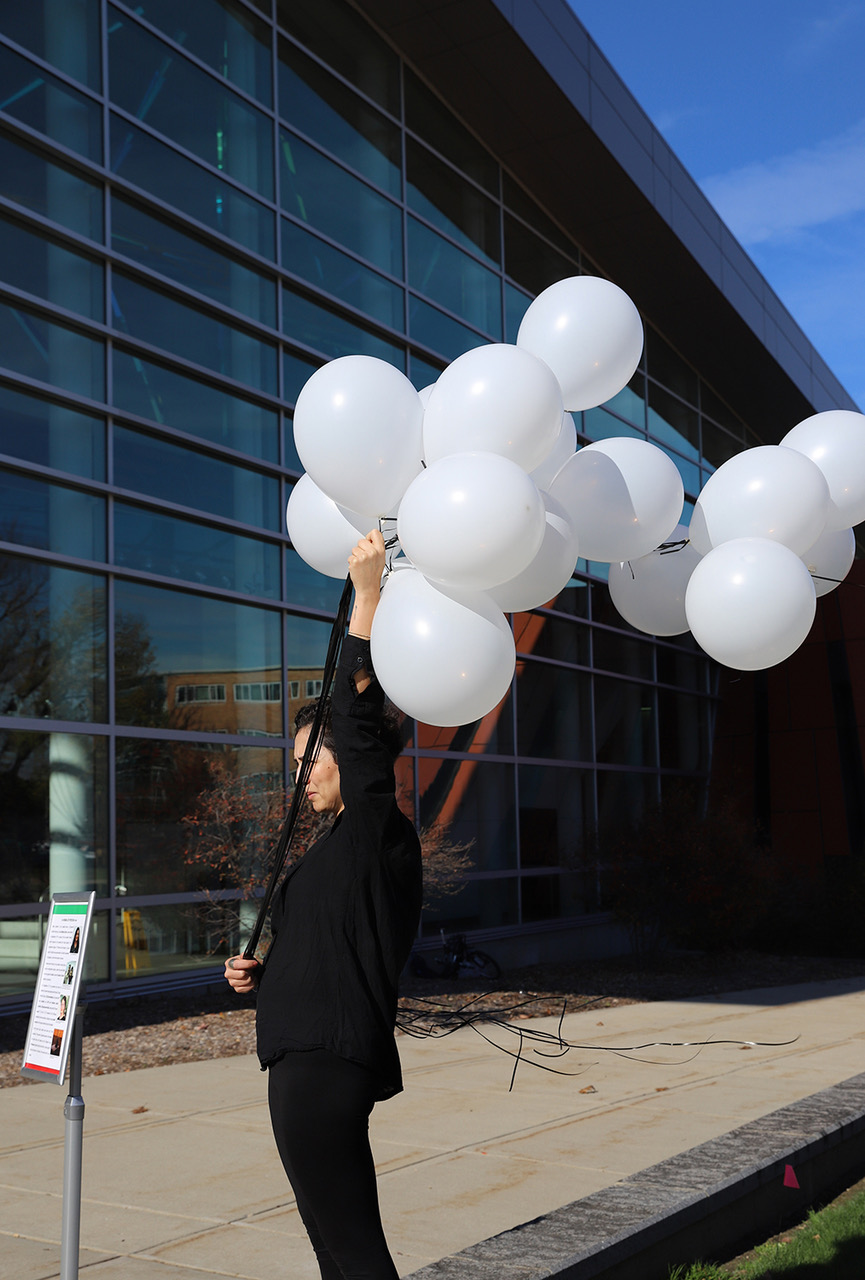 At MSU, there are over two hundred Iranian students and professors living and working at the forefront of their research, contributing to science and the community through scholarship activities and crafting a better future.

As an Iranian woman, I have never been prouder of my Iranian sisters, who speak up, break their silence and fight for their rights. This movement started by women and continues by men fighting shoulder to shoulder with women on the front line. This is a unique revolution as men are standing for women, and with women, and sacrificing their lives for reform. This women-led movement has also inspired many women throughout the Middle East, such as Afghan women who have long suffered from the Taliban regime.

Iran has a longstanding history of bearing brave female leaders and human rights activists, who fought so people could live in a more progressive, inclusive society that respects freedom and exercises it daily.

As I left the class that day, I thought about composer and playwright Jonathan Larson’s quote, “The opposite of war is not peace, it’s creation.”

On Nov. 30, ISA organized a Global University Day of Action for Iran at MSU to raise awareness about women’s rights in Iran and everywhere. The protest was held indoors in the STEM Building from 5:30 to 6:30 p.m.