How the celebrated activist’s influence lives on

As traffic flows along Grand River Avenue in Lansing's Old Town, few drivers may observe the name change to Cesar Chavez Avenue. When library patrons at Michigan State University check out a book or grab coffee at the café, they may not notice Chavez's namesake collection and portrait on the first floor.

The visible evidence may be subtle, but it's a reminder of Chavez's strong historic presence and influence at MSU and in mid-Michigan.

Chavez's impact on labor issues dates back to 1962, when he cofounded the National Farm Workers Association (later named the United Farm Workers) with Dolores Huerta. They gained national notoriety for leading grape and lettuce boycotts and fasts, which raised awareness for the plight of migrant workers. Over three decades, Chavez and Huerta grew to become the faces of the fight for better wages and conditions for migrant workers.

Chavez served as an agent of change with a demeanor that was approachable, humble, direct and down-to-earth. His ability to elicit change in nonviolent fashion elevated him to the echelon of Martin Luther King Jr. and Mahatma Gandhi. 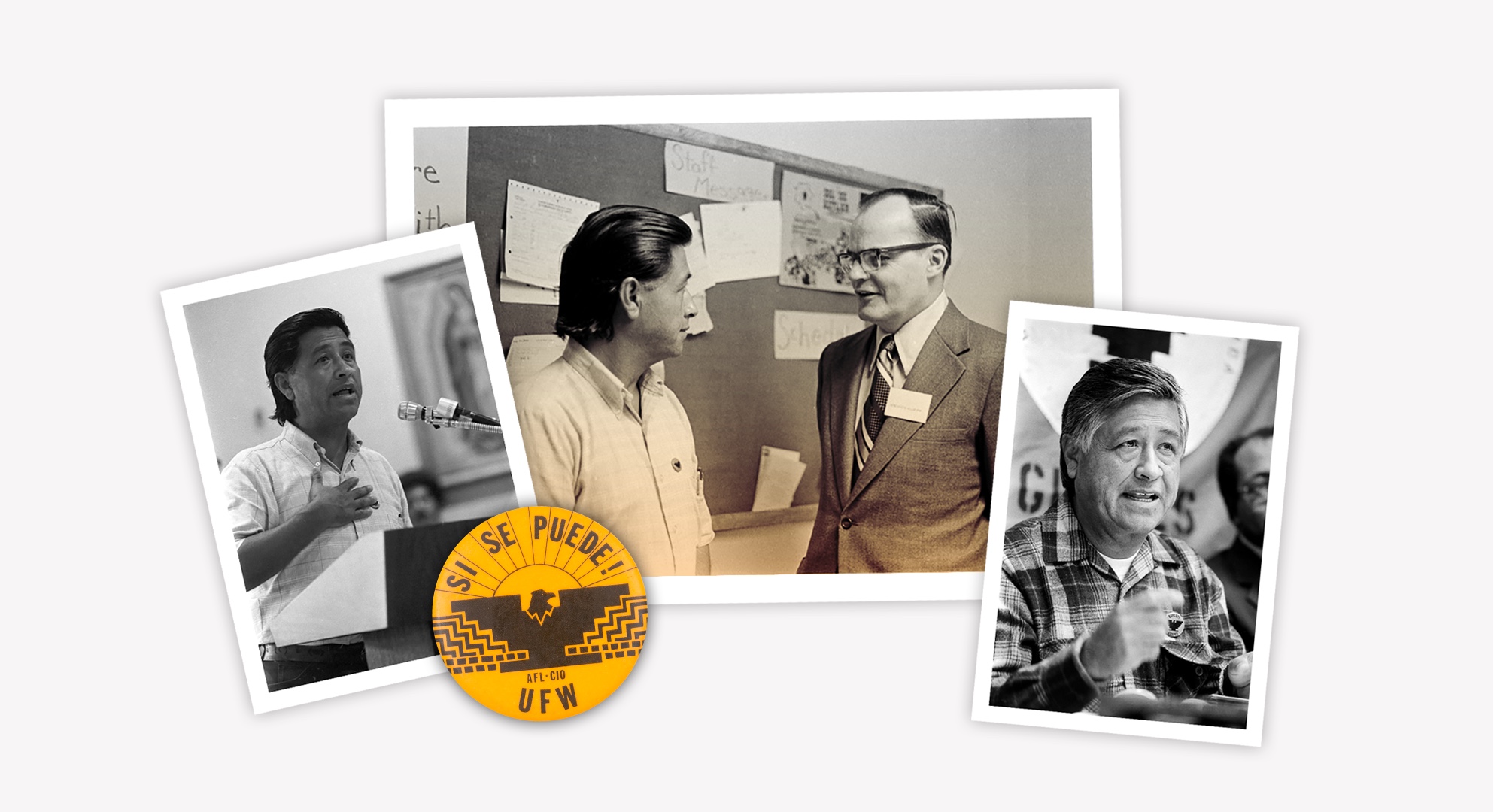 The influence of Cesar Chavez in Lansing and Michigan State University stems from multiple visits in the 1970s and 80s, drawing attention to the plight of migrant farm workers in the state and inspiring students to call for increased recruitment and retention efforts for Latinx students and faculty. Photos courtesy of: Archives of Michigan

He was drawn to the Mitten State largely due to the plights of the burgeoning Latino population in Michigan, whose growth mirrored the flourishing sugar beet industry. By the late '60s, Michigan's Latino population hovered around 80,000 and was centered around the sugar processing plants in Saginaw and Lansing.

There are many people in the area who were inspired by meeting with Chavez personally, especially since he maintained a consistent presence in Lansing and on MSU's campus.

Diana Rivera recalls the summer after her freshman year at MSU in 1973. She worked in farm fields from ages 8 to 18 before coming to MSU, so she was intrigued to hear him speak in Wells Hall. Chavez appeared shy and reserved. As he stepped before the nearly full auditorium, Rivera wondered if the crowd would be able to hear him. His voice, however, needed little amplification. "He spoke with strength in his voice as well as his message about conditions in California that I felt I had lived," Rivera says. "It's relative, I guess, that as a 10-year-old kid working in the hot Michigan summer days hoeing mile-long rows of beets or beans, it might as well have been California."

Chavez inspired her in part to become an activist, leading or joining many rallies and boycotts herself as a student. She later went on to become Michigan's first Chicano Studies Librarian and head of MSU's Cesar E. Chavez Collection, which she oversaw for more than 24 years. "I am so honored to have helped further Chavez's message and history as head of the collection," says Rivera, now librarian emerita and Spirit of Frida Civil Rights Award honoree. "Chavez was such a humble man that I think he would feel uneasy knowing of a collection honoring him, but he would be pleased to know his message was long lasting."

So much so that MSU can trace the number of programs serving its Latinx students to Chavez and Huerta, according to Rivera. "I'd attribute it to their first visits, their longstanding friendships to community members still living here and the enduring support of student boycott/strike actions," she says.

Their inspiration led to increases in Latinx student recruitment, faculty and staff hiring and establishing minority aid programs and the King-Chavez-Parks scholarships. They also helped influence the MSU trustees to approve a plan in 1972 to offer children of migrant workers in-state tuition. "The current Chicano/Latino Studies Program was the result of work, actions, meetings, negotiations and planning by students, faculty and university administrators, many of whom knew or grew up knowing about Chavez and Huerta's work," Rivera adds.

Latinx students comprise approximately 5% of MSU's total student population. All of these students were born after Chavez's death. However, people like Rivera, who were influenced by Chavez's visits, work to instill his legacy in today's Spartans. On March 31, Chavez's birthday, MSU celebrates Cesar Chavez Day, honoring both Chavez and Huerta.

Educating 'one farm worker at a time'

Connecting past and present and adding a personal touch are keys to student recruitment and retention, says Luis Garcia, longtime director of MSU's Migrant Student Services. "We have a saying, 'educating one farm worker at a time,' and that's the approach we follow for every student," he says. "We started with just over a handful of students, and it's grown over time. Even today, we are the only university in the Big 10 that has an office and consolidated efforts specifically designed to assist migrant and seasonal farm workers in their educational endeavors." 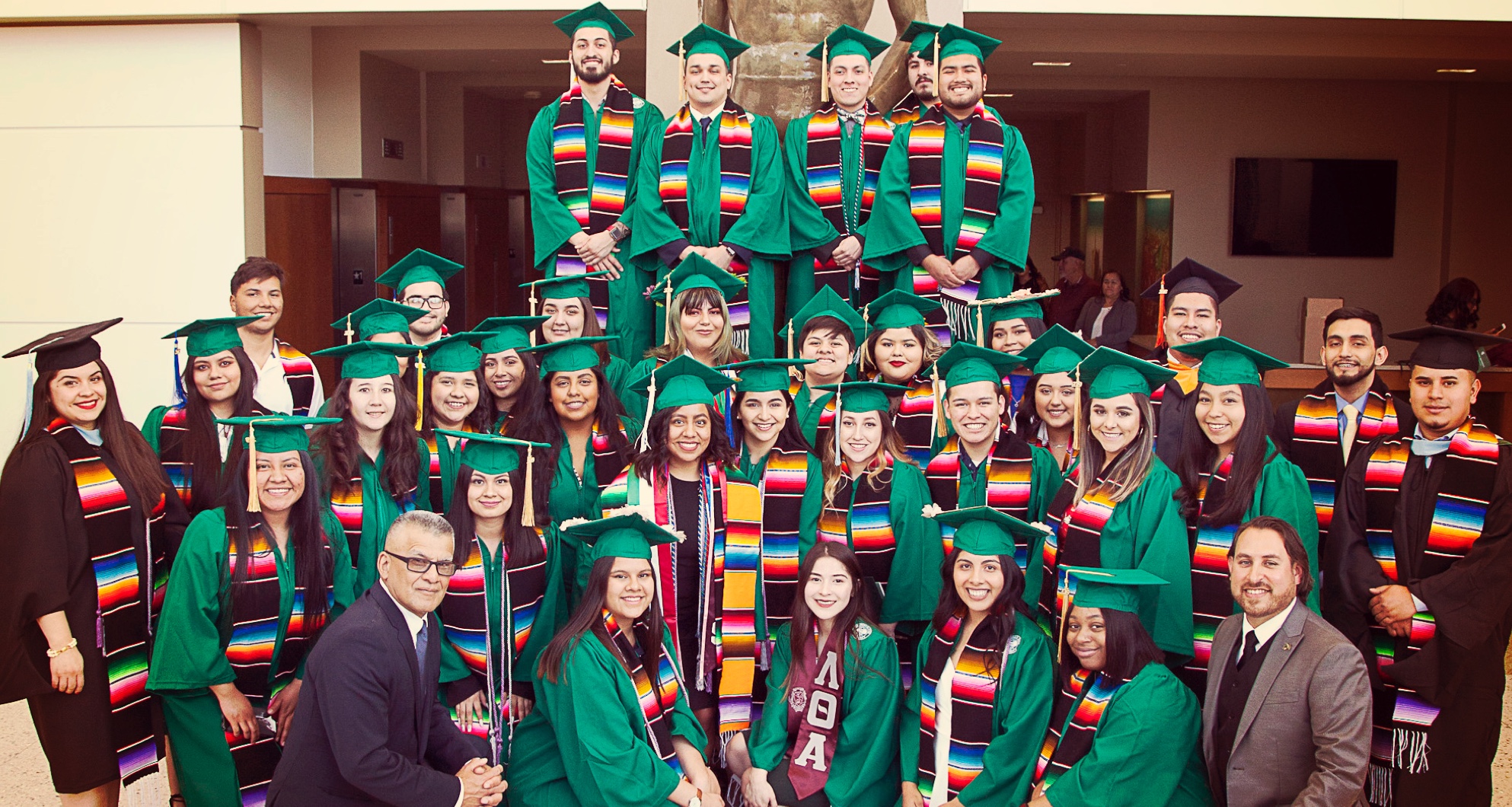 Garcia originally came to Michigan as a migrant worker, traveling from Waco, Texas, to Alma, Michigan, to pick fruit. "For me it was an easy choice: Pick in Texas when it's 100 degrees or come to Michigan with its cool breezes off Lake Michigan? Yes, please," Garcia says.

His office is tucked away within Holden Hall on south campus. Walking into the Migrant Student Services center, the music and paintings immediately convey a Latinx-friendly vibe. The welcoming atmosphere is appreciated by the visiting high school students pondering college choices. As Garcia asks each student of their future plans, they listen attentively. He speaks with an authentic voice, and the connection is immediate, as he laughs and transitions gracefully between Spanish and English.

He connects with them because he knows firsthand the challenges the students and their families have overcome. "I dropped out of high school, but I had a teacher who said I was bright, but I was too stupid to know it," says Garcia, who also saw Chavez speak at MSU. "He helped put me on track to go back to night school. I graduated, went to Ferris State, worked with the Peace Corps in Paraguay, got my master's degree at MSU, and I've been here ever since."

For many families with whom Garcia meets, college is still a distant dream. It's a gift that many parents hope to provide their children, but they're unsure how to make it a reality.

Sigifredo Morales is pushing his kids toward college without hesitation.

Morales resides between the tourist destinations of Saugatuck and South Haven on Michigan's west coast. His modest house and barn are just off a dirt road, ensconced by blueberry fields. A number of the area's blueberry farms are owned by Latinos. Many of them came to the United States in a full run, literally sprinting away from a life of poverty and toward hope and prosperity; leaving behind family and familiar comforts while striding toward promises of prosperity in an unfamiliar country.

Morales went without food and water for three days while crossing into the U.S. One of his companions broke his leg, and Morales faced a difficult decision. "Do you want to stay here with him and get caught or do you want to go to America?" the group leader yelled.

He'll always remember the face of his fallen acquaintance, but he chose freedom. He ran, and he's been here ever since.

On weekdays, Morales worked at a factory in Chicago, but he was drawn to picking blueberries in Michigan on weekends. Over the years, he earned his citizenship, drove between the Windy City and the blueberry fields and eventually earned enough money to quit his factory job, move to Michigan and buy his own farm.

David Mota-Sanchez, coordinator of MSU's Latino Farmer Initiative, knows Morales and the other Latino farmers in the area. Thanks to a grant from the USDA, Mota-Sanchez and his team work with blueberry farmers to improve operations and farming practices. They help navigate the complexities of planting to harvest, including pest and nutrient management, worker safety, food safety and farm business management. 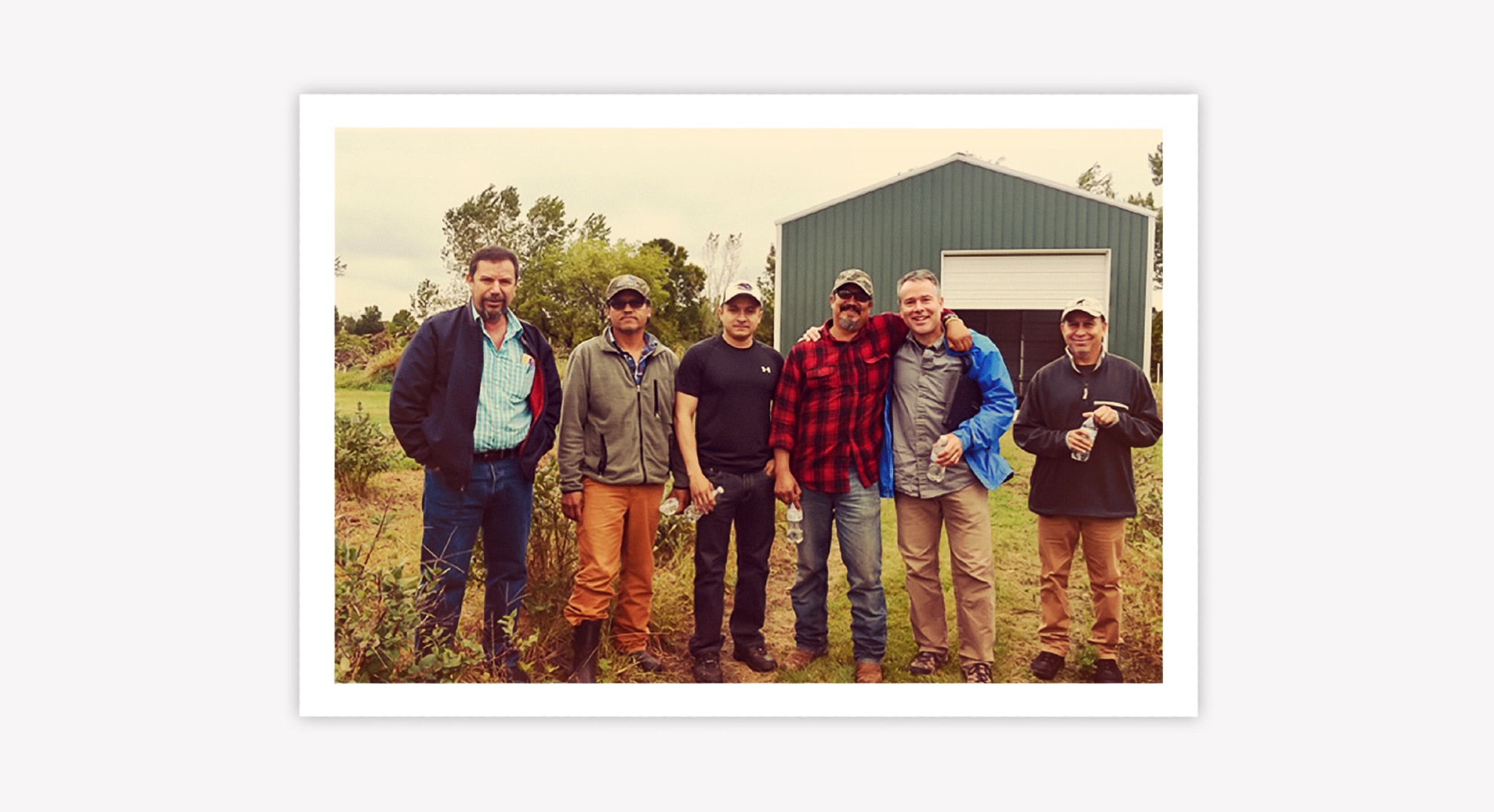 A group of Michigan blueberry farmers pose with Layne Cameron, second from right, who wrote this story.

Even with the help of MSU and the growing Latinx community support network, farming is difficult. The price per pound of blueberries is falling while expenses are rising. "Five years ago, we'd get $1 per pound, and now that's fallen to 30 cents," says Jesse Gamino, who's lived in Michigan for 38 years since getting out of the Army. "We could get more if we could harvest by hand, but the number of migrant workers or people willing to pick berries has dropped dramatically."

Both Morales and Gamino have children, but none of them has expressed interest in taking over their farms. The children are considering other professions as well as going to college.

Looking across their harvested fields, they view their children's choices as bittersweet. The farmers' hard work, long hours and willingness to chase their dreams have given them and their children a better life. "They see you work from 5 a.m. until 11 at night, and they don't want to work that hard," Morales says. "I've got three daughters, and two of them are at MSU. My youngest told me this is her last year of helping on the farm."

Morales' nephew, Eric Alcaraz, however, is following in his footsteps. He's living and working in Chicago and owns a farm down the road from his uncle's place. He'll cross over to farming full time this spring.

If Chavez were alive, he'd approve of the legacy they are passing along. "God gives us the gift of life and allows us to choose the way we will use our limited time on earth," Chavez once said. "It is an awesome opportunity."