It’s strange to think that there are nuclear reactions that physicists classify as gentle. After all, the particle accelerators that let scientists study these reactions are nicknamed “atom smashers,” not “atom coddlers.”

But gentle nuclear reactions represent more than a strange-sounding curiosity. These reactions let researchers stress-test certain scientific models that account for how the universe’s fundamental rules work, said Kaitlin Cook of the Facility for Rare Isotope Beams, or FRIB, at Michigan State University. And Cook is now creating new ways to study these reactions to further our understanding of science and medicine with the power of FRIB.

“FRIB is going is to open up our ability to do these reactions with nuclei we’ve never been able to access before,” said Cook, an assistant professor of nuclear physics at FRIB and in MSU’s Department of Physics and Astronomy in the College of Natural Science. “The catchphrase I’ve been using is that this is going to expand our palette.”

In the gentle nuclear reactions Cook will study, the cores of two atoms, or nuclei, come together with just enough energy to barely touch. This can lead to varying degrees of fusion, where the two nuclei combine — sometimes completely, sometimes not — to create new nuclei.

Expanding the palette of nuclei available to test these reactions will help construct better models, or formalized explanations, for nuclear physics, part of the U.S. Department of Energy Office of Science’s, or DOE-SC’s, long-range research plans. Improved models, in turn, can deepen our understanding of how the universe came together and stays together.

Better models can also lead to better medicine. For example, medical researchers have developed cancer treatments that send a beam of carbon atoms into tumors. The goal is to use these atoms to deliver a very potent but very controlled dose of radiation that attacks only cancer cells. 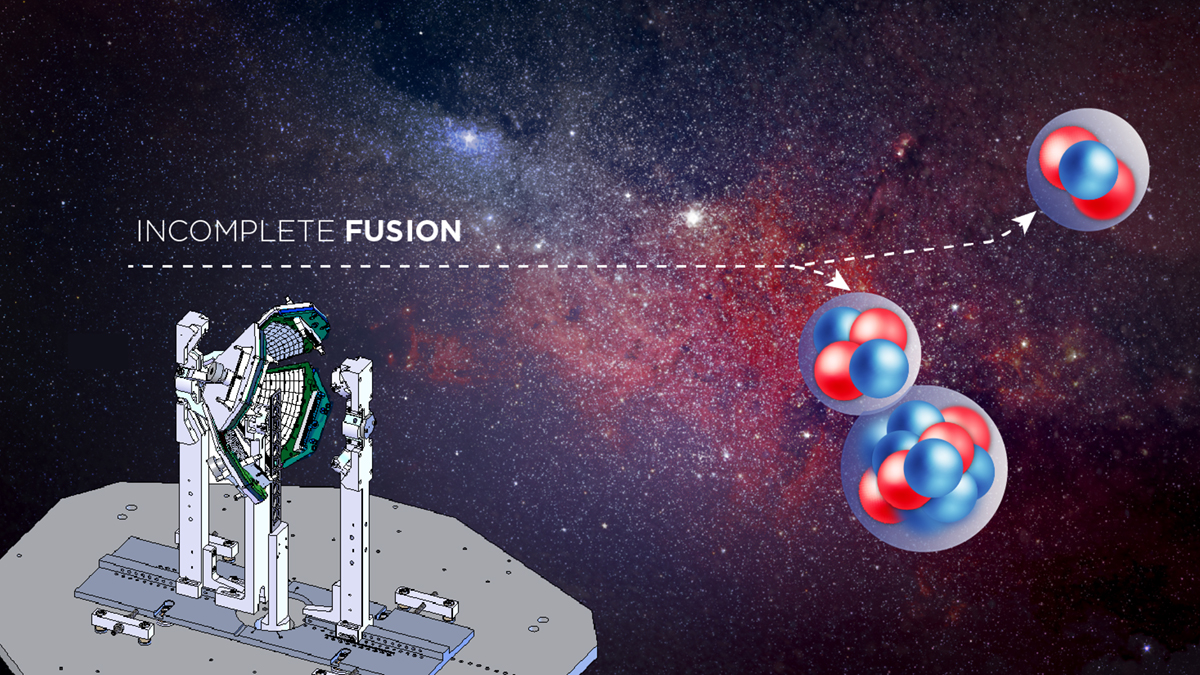 An incomplete fusion reaction is illustrated above a device which will allow scientists at FRIB to study these reactions. The device is the Fusion And Breakup of Light Elements (FABLE) detector array.

“If you want to precisely tune your treatment program so you don’t irradiate the cancer too much or too little, you need to be able to model those nuclear reactions,” Cook said. “This is an area where nuclear physics can directly affect people’s lives.”

Beyond that, nuclear physicists already know that their current models are incomplete. This is especially obvious when it comes to what are known as fragile nuclei.

“These are nuclei that are barely holding it together. They just want to collapse,” said Cook, who has a particular interest in these fragile nuclei.

“In a precision field like nuclear physics, 30% is a big deal,” Cook said. And nuclear physicists are passionate about accounting for and correcting this discrepancy.

“We’re all really great colleagues, but we disagree about how this is happening,” she said. “It can get a little shouty at conferences.”

With support from a grant from the DOE-SC, Cook and her team at FRIB have designed experiments to provide more concrete information and, hopefully, answers.

In an experiment this fall, the Spartans were joined by collaborators from San Jose State University and Italy’s University of Padua and National Institute for Nuclear Physics.

The experiments use the new Fusion and Breakup of Light Elements, or FABLE, detector array at the National Superconducting Cyclotron Laboratory, or NSCL, at MSU to make what Cook calls “frontier measurements.” Using the NSCL data, the FRIB team will be able to analyze the reactions like never before. When FRIB begins user operation in early 2022, it will not only make isotopes that have never been seen before, but will empower researchers to study them in new ways. What was previously impossible will be possible at FRIB.

“This is why MSU is a nexus of nuclear physics. We have these things that nobody has ever had before, which is the most exciting thing to me,” Cook said. “We have more than we’ve ever had to give us a handle on what’s going on.”

Michigan State University operates the Facility for Rare Isotope Beams (FRIB) as a user facility for the U.S. Department of Energy Office of Science (DOE-SC), supporting the mission of the DOE-SC Office of Nuclear Physics. Hosting the most powerful heavy-ion accelerator, FRIB will enable scientists to make discoveries about the properties of rare isotopes in order to better understand the physics of nuclei, nuclear astrophysics, fundamental interactions, and applications for society, including in medicine, homeland security, and industry.