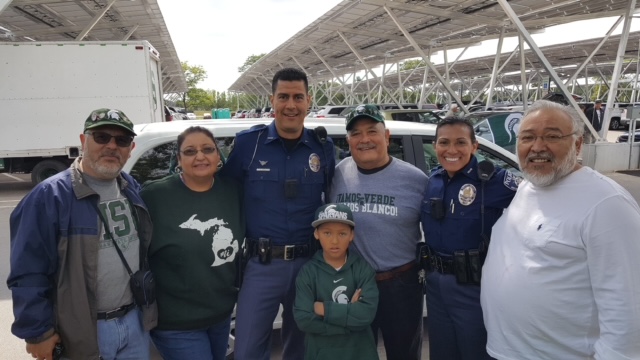 Officer Sherief Fadly with family and friends on campus.

It is an understatement to say that 9/11 and the war on terrorism changed many aspects about living in the United States. For MSU Department of Police and Public Safety Captain Sherief Fadly, the period after 9/11 was filled with experiences of prejudice, racism and bigotry, which he described as palpable in his personal and professional life.

“The racial slurs launched at me were real and made with hate-fueled passion. Whether it was with family or friends or dining in a restaurant, I could hear the racial slurs,” recalled Fadly, who is Muslim.

Fadly was familiar with the number of hate crimes on the rise in the country. In the East Lansing Police Department, he was the one investigating them as a detective in the violent crimes division.

“I saw firsthand the effects of such hate, and I witnessed how our Middle Eastern community members didn’t want to leave their homes. They were scared. And they sacrificed their rights and their freedoms to live and move around in peace out of fear of being accosted, harassed or, even worse, assaulted or killed,” he said.

In September 2010, he investigated a case of arson and ethnic and religious intimidation after a pastor in Florida called 9/11 “Burn a Quran Day.” As a result, the Quran, the central text of Islam, was set on fire and placed outside a local mosque in East Lansing.

Fadly learned quickly how hate, ignorance and racism could find a home even within his profession. He was faced with silence and felt ostracized, both in his community and even among his colleagues. Following a patrol briefing shortly after 9/11, someone asked him, “Why does your religion hate us so much?”

Fadly had to decide how he would confront these attitudes. “I knew I had to stay the course, even though many days I had to ask myself why I was doing this, but it’s the ability to positively impact and help others that has kept me in this profession.”

Fadly’s upbringing greatly influenced his desire to serve and protect others by becoming a police officer. “When I was a new officer in training, I was taught that serving the community is doing God’s work and that has stuck with me 25 years later,” he said.

The experience ultimately opened his eyes to the struggles of other underrepresented communities. As a member of the Muslim community, he felt like he needed to be an ambassador of religion and culture and, as uncomfortable as it was, he decided to put himself in a position to educate others.

Fadly began leading introductory presentations about Islam to foster unity, understanding and diversity within the community and to clear misconceptions about his religion and culture. In 2010, he assisted with the Bridge the Gap campaign, an FBI community policing model.

In 2012, he was hired as a police officer at MSU and, in 2015, he was assigned to the FBI's Joint Terrorism Task Force where he was instrumental in leading the Bridge the Gap campaign at the FBI Lansing Resident Agency.

As a Muslim fluent in Arabic, he was no stranger to East Lansing’s Muslim community and because of that, Fadly was able to build trust between different groups within the city.

Fadly’s parents immigrated to the United States from Egypt. He and his siblings were born in the U.S. and, after his father got his doctorate, they moved to Lansing when he was 3 years old.

Growing up in East Lansing, Fadly has been praying at the Islamic Center since his youth. He played at the local playgrounds, parks and community centers with other East Lansing children who now have their own families and work and live in East Lansing today.

“This community is very personal and dear to me. Wherever I go within the Middle Eastern and Muslim community, they know me as Officer Sherief,” he said. Because of Fadly’s relationships, he was able to talk to community members and strategize with them about how to utilize resources to improve their quality of life.

“I have to be an excellent representative in two different ways, as a Muslim and as a police officer,” he said. 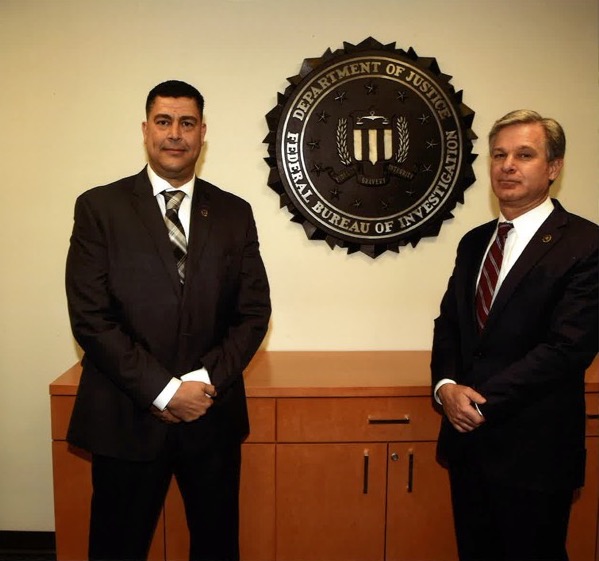 “It felt surreal to be invited to be the keynote speaker and to share the story about my efforts to make a positive impact on communities,” said Fadly.

In August, 2021, Fadly was promoted as a captain in the MSU Department of Police and Public Safety. When the Diversity, Equity and Inclusion unit within MSUDPPS learned about his keynote at the FBI headquarters, they decided to invite leaders across campus to attend an event on August 24 to hear his message.

Vice President and Chief Diversity Officer Jabbar R. Bennett, who was in attendance, said, “I was impressed with Captain Sherief Fadly’s presentation and I appreciated his candor, empathy and vulnerability, as well as his overall leadership that he will certainly bring to public safety at MSU.”

As the country approaches the 20th anniversary of 9/11, policing in America also is grappling with protests at home demanding structural changes following the death of George Floyd in May 2020.

“The Michigan State University Department of Police and Public Safety is making it a priority to invest in our community and to be there,” said Fadly. “Under the leadership of Vice President for Public Safety and Chief of Police Marlon Lynch, our community engagement efforts will be like nothing anyone has ever seen before. The moment is upon us to show our community that we are there for them, to help bridge those gaps and to give us a chance to serve them.” 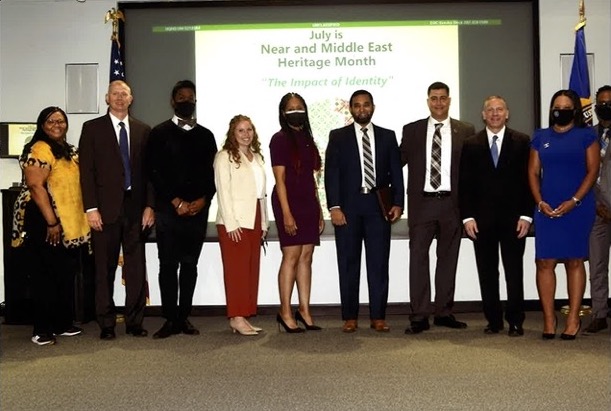 Captain Sherief Fadly in a group photo at FBI Headquarters.

Following the police brutality protests during the summer of 2020, MSU President Samuel L. Stanley Jr., M.D., established the MSU Task Force on Racial Equity. The task force made recommendations that included the expansion of the MSUDPPS Inclusion and Anti-Bias Unit.

In considering those recommendations, the department reorganized its structure to emphasize community engagement and its commitment to diversity, equity and inclusion.

For Fadly, building trust in the police is about fostering relationships with the community and thinking about how to get to the community’s table to serve them.

“I think the uniform and the badge can create a disconnect when the reality is at the end of a shift, an officer has to take off the uniform, take off the vest, go back to a family and to the stresses in life like every other person in the community,” said Fadly. “They worry about paying bills, their kids’ health, getting their kids into college, taking care of parents."

Fadly's success in building community relations will be an asset to MSU. As captain of MSUDPPS' patrol division, he is committed to supporting the department's engagement efforts.

“I think building trust is about expressing vulnerability. I needed to open myself up. I had to make myself vulnerable. I had to talk about my flaws and my anxieties. I had to be uncomfortable to humanize the profession,” Fadly said.