Michigan State University researchers have discovered that one of the most important reactions in the universe can get a huge and unexpected boost inside exploding stars known as supernovae.

This finding also challenges ideas behind how some of the Earth’s heavy elements are made. In particular, it upends a theory explaining the planet’s unusually high amounts of some forms, or isotopes, of the elements ruthenium and molybdenum.

“It’s surprising,” said Luke Roberts, an assistant professor at the Facility for Rare Isotope Beams and the Department of Physics and Astronomy, at MSU. Roberts implemented the computer code that the team used to model the environment inside a supernova. “We certainly spent a lot of time making sure the results were correct.”

The results, published online on Dec. 2 in the journal Nature, show that the innermost regions of supernovae can forge carbon atoms over 10 times faster than previously thought. This carbon creation happens through a reaction known as the triple-alpha process. 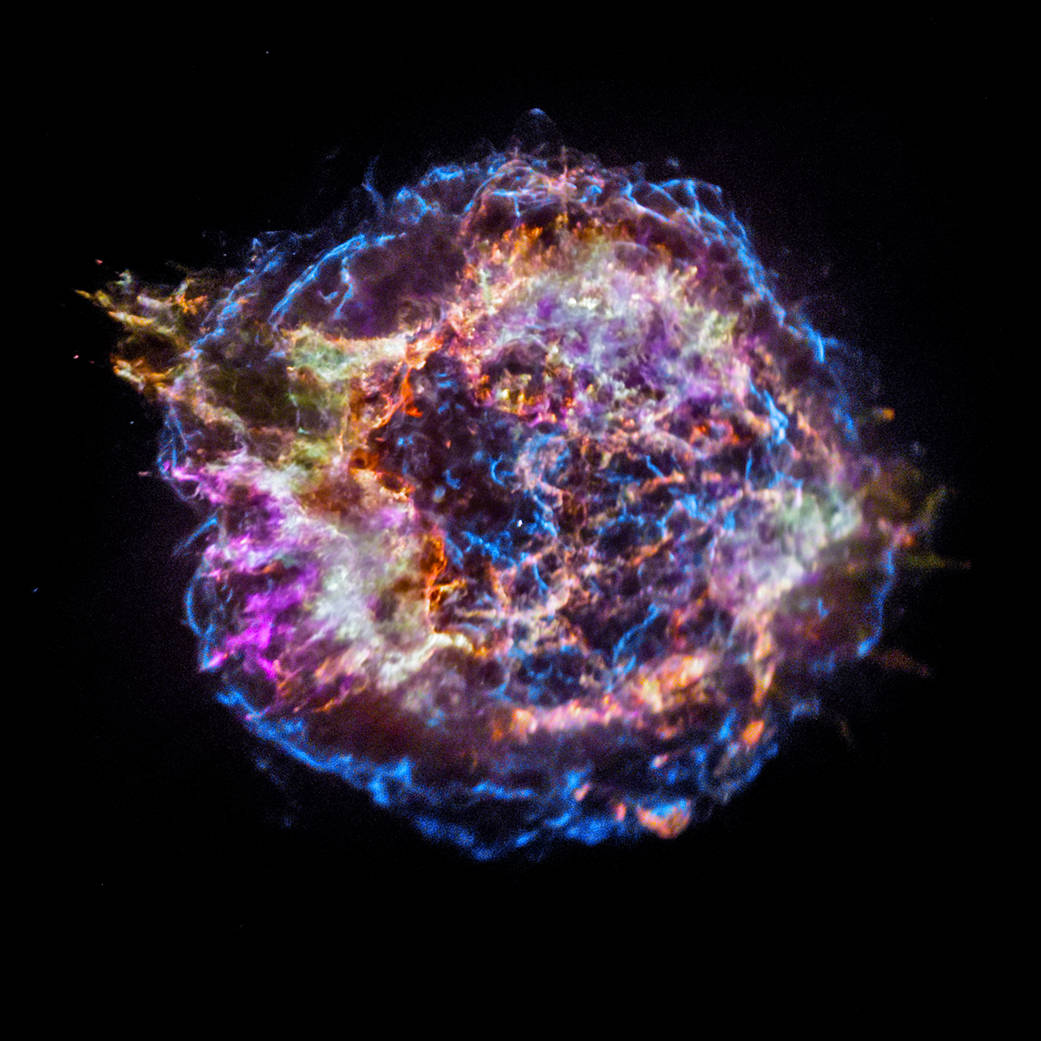 Cassiopeia A is a supernova remnant in the constellation Cassiopeia. Credit: NASA/CXC/SAO

“The triple-alpha reaction is, in many ways, the most important reaction. It defines our existence,” said Hendrik Schatz, one of Roberts’s collaborators. Schatz is a University Distinguished Professor in the Department of Physics and Astronomy and at the Facility for Rare Isotope Beams and the director of the Joint Institute for Nuclear Astrophysics – Center for the Evolution of the Elements, or JINA-CEE.

Nearly all of the atoms that make up the Earth and everything on it, people included, were forged in the stars. Fans of the late author and scientist Carl Sagan may remember his famous quote, “We’re all made of star stuff.” Perhaps no star stuff is more important to life on Earth than the carbon made in the cosmos by the triple-alpha process.

The process starts with alpha particles, which are the cores of helium atoms, or nuclei. Each alpha particle is made up of two protons and two neutrons.

In the triple-alpha process, stars fuse together three alpha particles, creating a new particle with six protons and six neutrons. This is the universe’s most common form of carbon. There are other isotopes made by other nuclear processes, but those make up just over 1% of Earth’s carbon atoms. 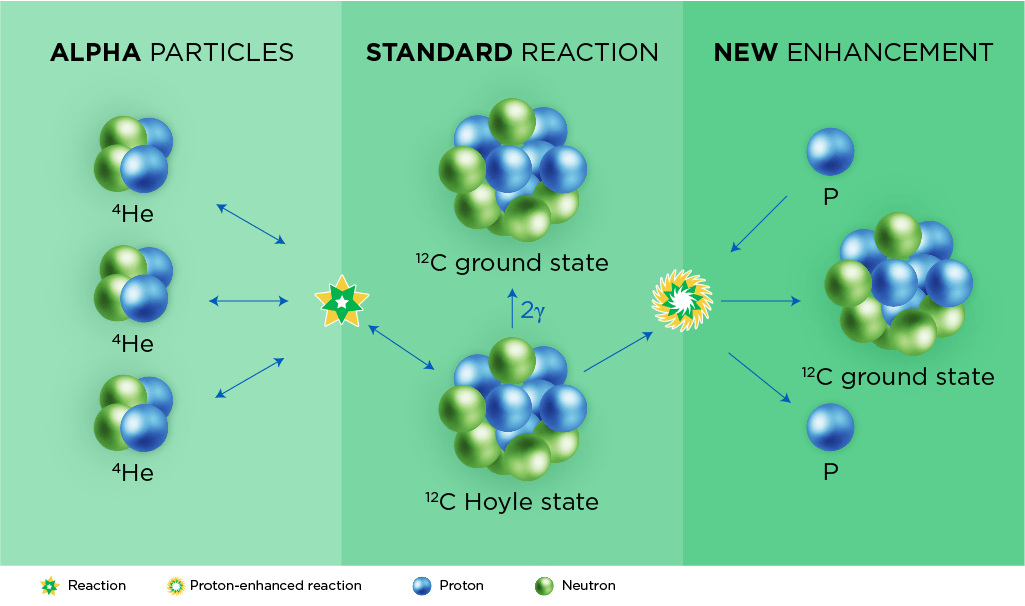 In the triple-alpha process, stars fuse three helium nuclei, also called alpha particles together (left) to create a single carbon atom with a surplus of energy, known as a Hoyle state. That Hoyle state can split back into three alpha particles or relax to the ground state of stable carbon by releasing a couple gamma rays (center). Inside supernovae, however, the creation of stable carbon can be enhanced with the help of extra protons (right). Credit: Facility for Rare Isotope Beams

Still, fusing three alpha particles together is usually an inefficient process, Roberts said, unless there’s something helping it along. The Spartan team revealed that the innermost regions of supernovae can have such helpers floating around: excess protons. Thus, a supernova rich in protons can speed up the triple-alpha reaction.

But accelerating the triple-alpha reaction also puts the brakes on the supernova’s ability to make heavier elements on the periodic table, Roberts said. This is important because scientists have long believed that proton-rich supernovae created Earth’s surprising abundance of certain ruthenium and molybdenum isotopes, which contain closer to 100 protons and neutrons.

“You don’t make those isotopes in other places,” Roberts said.

But based on the new study, you probably don’t make them in proton-rich supernovae, either.

“What I find fascinating is that you now have to come up with another way to explain their existence. They should not be here with this abundance,” Schatz said of the isotopes. “It’s not easy to come up with alternatives.”

“It’s kind of a bummer in a way,” said the project’s originator, Sam Austin, an MSU Distinguished Professor Emeritus and former director of the National Superconducting Cyclotron Laboratory, FRIB’s predecessor. “We thought we knew it, but we don’t know it well enough.”

There are other ideas out there, the researchers added, but none that nuclear scientists find completely satisfying. Also, no existing theory includes this new discovery yet.

“Whatever comes up next, you have to consider the effects of an accelerated triple-alpha reaction. It’s an interesting puzzle,” Schatz said.

Although the team has no immediate solutions to that puzzle, the researchers said it will impact upcoming experiments at FRIB, which was recently designated as a U.S. Department of Energy Office of Science user facility.

Furthermore, MSU provides fertile ground for new theories to germinate. It’s home to the nation’s top-ranked graduate program for training the next generation of nuclear physicists. It’s also a core institution of JINA that’s promoting collaborations across nuclear physics and astrophysics like this one, which also included Shilun Jin. Jin worked on the project as an MSU postdoc and has since gone on to join the Chinese Academy of Sciences.

So, although Austin expressed a little disappointment that this result contradicts longstanding notions of element creation, he also knows it will fuel new science and a better understanding of the universe.

“Progress comes when there’s a contradiction,” he said.

“We love progress,” Schatz said. “Even when it’s destroying our favorite theory.”

This work was supported by the National Science Foundation and JINA-CEE, which is an NSF Physics Frontiers Center, and DOE’s Advanced Computing program. Additionally, Jin was supported by a postdoctoral fellowship furnished by MSU and the China Scholarship Council.

The National Science Foundation funds the National Superconducting Cyclotron Laboratory, a center for nuclear and accelerator science research and education. It is the nation’s premier scientific user facility dedicated to the production and study of rare isotopes.


MSU establishes and operates FRIB as a user facility for the Office of Nuclear Physics in the U.S. Department of Energy Office of Science.