It was late – almost 10 p.m. I had to swing by my office after a campus event to pick up my computer and bag. I was grabbing them when I heard the door open. I assumed it was a colleague who had also attended the event, but I went to the door to look. No one was there. Suddenly, from behind the reception desk a voice whispered, “You’re not supposed to be here.” I spun around and an older man in a custodial uniform was crouched there. Startled, I said, “I’m just leaving,” and hurried back to my office. I quickly grabbed my stuff and walked to the door but he was gone. The lights were off, I never heard the (very loud) door shut and the hallway was empty. He had disappeared without a trace. Believe it or not.

At the time, I was a little freaked out, but assumed I had just caught the cleaning crew emptying the trash. When I relayed this to a couple of colleagues, they described the man before I had given any details and said they had similar spooky encounters with him. One told me his nametag said, “Sal.” And, when I checked, no one on the cleaning crew for Olds Hall fits this description. Then again, he could have been filling in that night. Or maybe Sal really is a ghost. If he is, I choose to think he’s just hanging out, watching over us and emptying the trash.

Perhaps my colleagues were having fun at my expense, but they swear they’re not. And, it’s no secret that there have been plenty of other creepy instances I’ve run into in the building. I’ve written about them before in my columns, “Strange matter” and “Who you gonna call.” Phantom footsteps, doors closing by themselves, elevators stopping on empty floors – all part of the charm of this hundred-years-old building.

But my coworkers do love to have a bit of a laugh, even at my expense. A few weeks after my experience, I happened to be standing near the spot, looked down and found this: 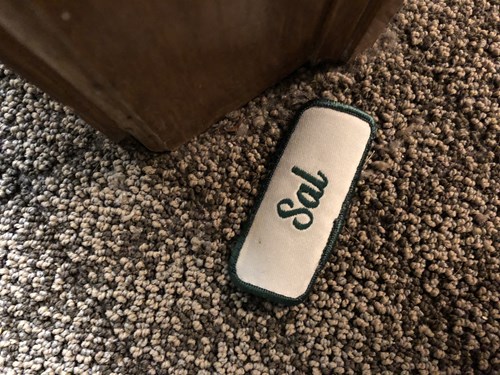 This is certainly the time of year to explore the unexplained. MSU’s Campus Archaeology program, in partnership with the MSU Paranormal Society, offers a super cool tour that examines some real history, steeped in haunted lore. Check out the MSUTODAY FEATURE: Spartan Spirits to learn more and see some mysterious photos that will send a shiver up your spine. And, if you get a chance, you really should check out their Apparitions and Archaeology Haunted Tour in person.

Jeff Painter is a doctoral student and a current Campus Archaeology fellow. He says that “besides playing in the dirt,” most of his favorite memories come from working with the public at CAP outreach events just like the tour. Read his STUDENT VIEW: Connecting people with the past, to learn about his work to bring the past into the present.

The Campus Archeology program wouldn’t even exist if not for Lynne Goldstein. She recently retired from the university but was the founder of the program. The first time I met her, I thought she was one of the coolest people I’d met on campus. She was an early adopter to using social media in her work (and she’s not a millennial!) and had the most interesting stories to share. Her dedication and enthusiasm were infectious and each subsequent meeting just confirmed that she truly was absolutely awesome. I know the program will miss her dearly, but she laid the foundation for continued success. She took the time to write one last blog post, which you can check out in the FACULTY VOICE: My final post.

Lynne did tell me once that she had definitely heard from others that they believe Olds Hall to be haunted. What history tells us is that without the private gift from Ransom E. Olds, the automobile magnate, Olds Hall wouldn’t exist today. The original building, home to the engineering program, burned down in 1916. With the gift from Olds, to rebuild using the original plans, the walls went up and the program remained afloat.

Throughout history, it has taken the generosity of thousands of Spartans to help the university grow, thrive, make discoveries and change lives. This fall, MSU is wrapping up a record-breaking capital campaign that has raised more than $1.7 billion. Check out the MSUTODAY FEATURE: Empowering the extraordinary, to learn more about this achievement and its impact.

Maybe Sal used to clean the original building in 1916 and he misses the place. Or maybe he cleaned the new building years later. Most likely, he’s just a guy who’s not a ghost and happened to be filling in a couple nights. Even if he is a ghost, I’m not bothered by him in the least. The spirits of Spartans from times gone by simply remind me of all the astonishing work that has been done here since the university opened its doors in 1855. Spartans have healed, discovered, taught, created, worked and changed lives across the globe. And that’s not scary at all. #SpartansWill.