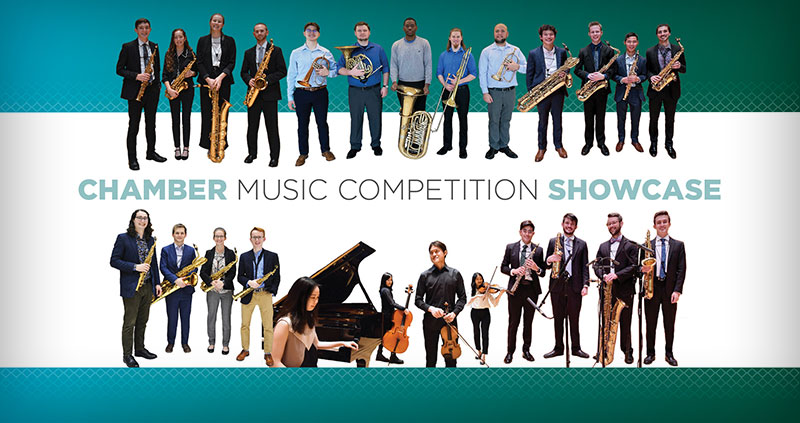 Rising chamber music stars from the Michigan State University College of Music take the stage to compete for recognition and prizes in the second annual Barbara Wagner Chamber Music Showcase. On Apr. 15 and 16, at both the Fairchild Theatre and via digital broadcast from the College’s Livestream channel, an event that is part of the 2021-22 MSU Federal Credit Union Showcase Series.

The six groups competing in the event are among the best chamber musicians in, strings, winds, brass and piano at the College of Music. Each concert will feature a group of finalists who were selected by a panel of first-round judges that included violinist Sibbi Bernhardsson of the Oberlin College and Conservatory, percussionist Feza Zweifel who is co-founder of Burning River Brass and Principal Timpanist of the National Arts Centre Orchestra, and oboist Keve Wilson who is a Broadway musician and member of American Modern Ensemble.

Finalists will compete for first, second and third place cash awards, performance opportunities, specially commissioned works and marketing and promotional support. Distinguished final round judges include pianist Kathryn Brown of the Cleveland Institute of Music, trumpeter Louis Hanzlik of the University of Connecticut and The Juilliard School, and GRAMMY-nominated soprano soloist Lindsay Kesselman.

Audience members, both in-person and online, are encouraged to participate in selecting the People’s Choice Award. Online voting will take place after the final performance of the second day of performances. In-person and virtual audience members watching the digital broadcast will be provided with a link to submit their top choice.

For full details on the showcase, visit music.msu.edu