Major depressive disorder affects women twice as often as men, but researchers are still trying to identify the reasons why. Researchers at Michigan State University have recently received a $3 million grant from the National Institutes of Health to continue their investigation of how male and female brains respond to stress differently and how testosterone could be the key to increasing resilience.

The National Institute of Mental Health has begun to look at biological sex as a variable that could help explain some mental health disparities. Since 2016, A.J. Robison, an associate professor in the College of Natural Science and director of MSU’s Neuroscience Program, and his team have been studying the effects of stress on the brain and discovered that sex and testosterone play a role. 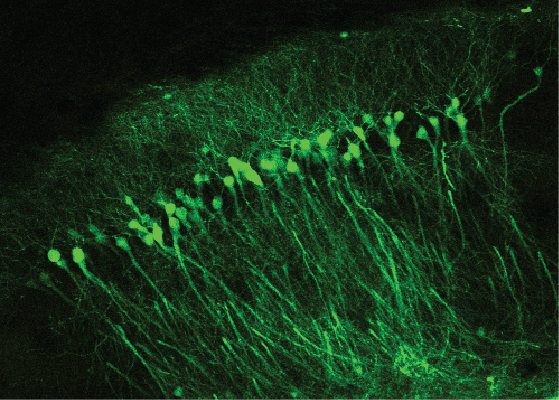 A group of neurons forming a brain circuit. Image courtesy of A.J. Robison

“Through earlier research, we found there is a specific brain circuit in the hippocampus that is more excitable in female mice than in males,” Robison said. “That circuit is regulated by testosterone.”

Robison’s team includes his wife, Michelle Mazei-Robison, a co-principal investigator on the grant and associate chair of the physiology department in the College of Natural Science, along with graduate students Elizabeth “Liz” Williams, Claire Manning, Ivana Lakic and Chiho Sugimoto. Their research has shown that testosterone reduces the excitability of this brain circuit.

Left to right: Andrew Eagle and graduate students Chiho Sugimoto and Ivana Lakic work with A.J. Robison on sex differences in brain circuitry underlying vulnerability to depression. Credit: Ken Moon
“I’m really excited to be a part of this innovative project to dissect mechanisms that contribute to sex differences in stress resiliency,” Mazei-Robison said. “These studies have the potential to identify targets that could be leveraged towards novel therapeutic strategies to treat mood disorders.”

Since testosterone is central to many functions in the body, the answer is not as simple as giving someone with depression a testosterone boost. By identifying how testosterone affects neurons in the circuit through either — the signaling on the cell’s surface or binding DNA in the cell’s nucleus — researchers can develop and leverage novel targets to treat depression in both sexes. “Now, we want to know how testosterone is causing this change in the brain circuitry,” Robison said. “If we can figure that out, maybe one of those things is something we can use to create a female- or male-specific pharmacological treatment for depression.”

This research has also spawned new studies in related areas. For example, Andrew Eagle, a research associate in the Department of Physiology at MSU and former postdoctoral fellow of Robison, is studying how this same brain circuit is connected to the rewarding effects and relapse behaviors associated with cocaine use in the hopes of finding new treatments for substance use disorder.