For the last few weeks, three peregrine falcon chicks have been leaping from the top of Spartan Stadium at Michigan State University, growing in independence and making their final transition to adult raptors. Because of the hard work and dedication of students in MSU’s Fisheries and Wildlife Club, viewers from around the world were able to witness their lives unfold.

MSU employees and community observers have seen peregrine falcons around Spartan Stadium for the past five years. The nearly 162-foot tower mimics their traditional nesting places at the highest points on cliffs. Still, peregrine falcons need a flat surface with gravel or rocks to nest, and no one had seen a successful nest or chicks at the stadium. Students in the Fisheries and Wildlife Club embarked on a mission to change that.

“Being a state endangered species, we were really interested in them and we wanted to provide a safe nest site,” Evan Griffis told WILX during an interview in March. Griffis, a senior studying fisheries and wildlife in the College of Agriculture and Natural Resources, served as the project's leader. The club’s members quickly realized all the steps and resources that would be needed to successfully install a nesting box for the birds.

“I’m here to help, but I tried really to empower them to figure it out,” says Jim Schneider, club adviser and undergraduate program coordinator in the College of Agriculture and Natural Resources. “I think Evan’s passion really filtered to the rest of the group. They took the idea and ran with it.”

In attendance at one of the first meetings the students arranged was the team from the Athletics Department that manages Spartan Stadium.

“The students were very professional and came prepared with exactly what they needed. It was easy to say yes,” says Kasey Carter, assistant athletic director for facilities and operations management. “Not a lot of people can say they have falcons at their football stadium.” Club members began to make connections with other campus units, including Infrastructure Planning and Facilities and University Advancement. The students worked together to prepare a grant application and successfully received funding from the Associated Students of Michigan State University, the university’s student government. With the grant and donations from the MSU Forestry Department as well as private donors, the club raised more than $8,700 to make their vision a reality, far above the $5,000 they estimated the project would cost.

“We really bonded as a team. We learned to communicate both professionally and effectively. We figured out how to find resources and supporters and to utilize our network,” says Molly Engelman, club president and a senior studying water sciences in the College of Agriculture and Natural Resources. “Our success really showed me how much MSU has to offer. I’m grateful to be part of a community that was so on board with what we were trying to do, and to the partners who were so easy to work with.”

Schneider adds, “If any one of the campus partners didn’t see the importance of what was being done, we wouldn’t be adding three new members to an endangered species.”

In January, the nesting box was installed on the roof at the north end of Spartan Stadium. 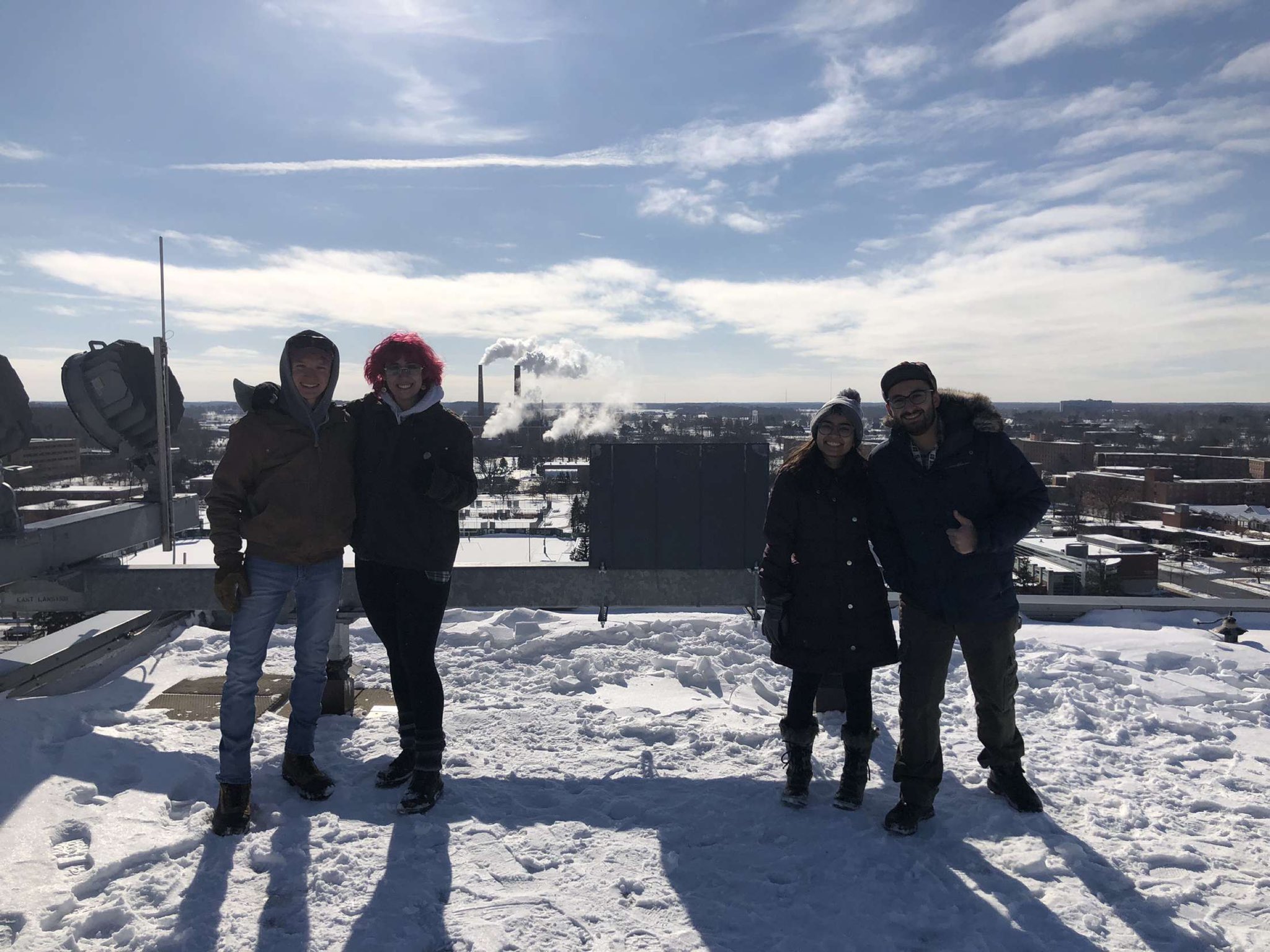 “Being in the stadium in the middle of winter, and subsequently on top of the press box, was incredibly unique,” says Eddie Yago, club treasurer and a senior studying integrative biology in the College of Natural Science. “How many students have ever gone up there? How many students have seen MSU’s campus from that specific view?”

A web camera and livestream on the club’s YouTube page was set up in March. By then, a pair of peregrine falcons was already in residence. The club ran a naming contest on Twitter and came up with Freyja and Apollo.

“We were so shocked to actually see the falcons in the box — we didn’t expect them to take to it so soon,” says Engelman. “It felt like a scramble to make it on time, with lots of emails and lots of fundraising. Then to have it come to fruition was incredible.” 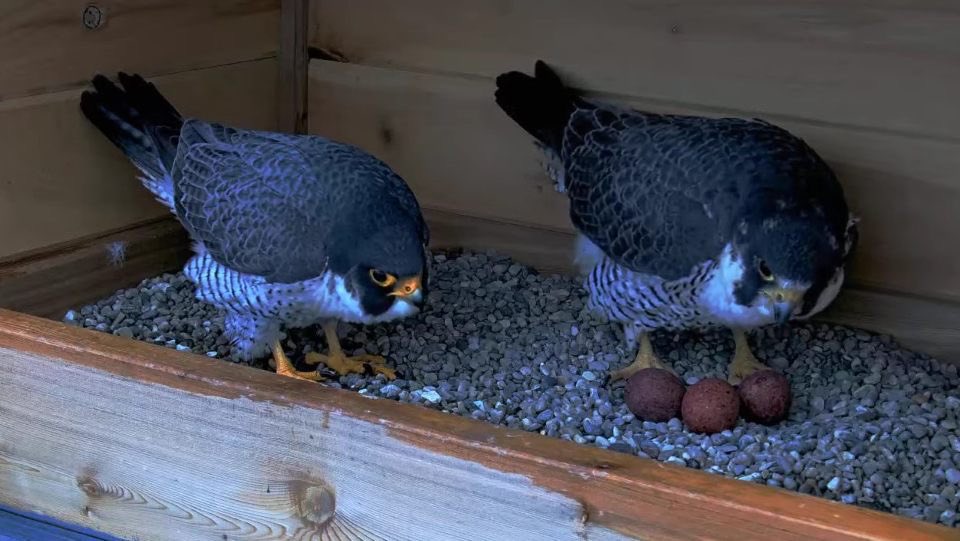 Apollo, left, and Freyja, right, took excellent care of their eggs. It typically takes about 30 days for an egg to hatch. Photo courtesy of the Fisheries and Wildlife Club.

During the next few months, thousands watched as eggs were laid and hatched. The club estimates more than 50,000 viewers from 23 countries have tuned into the Spartan Stadium Falcon Webcam with a picture-perfect view of the peregrine falcon nest box atop the stadium’s tower.

“Spartan nation has taken a great deal of pride in the students’ effort. We’ve received a lot of feedback from community members and alumni around the world,” says Schneider. “People have really been engaged.”

Once the chicks were old enough, Jen Owen, an associate professor in the MSU Department of Fisheries and Wildlife, and Chad Fedewa, a biologist with the Michigan Department of Natural Resources, applied bands to their legs for tracking purposes. Jen Owen holds up one of the chicks during the banding process. Before the peregrine falcon chicks get their adolescent feathers, bands can be applied to their legs once they are fully grown without future harm to the bird. Photo courtesy of the Fisheries and Wildlife Club.

“Bands are a passive form of monitoring,” says Owen. “Each band has a unique digit or color that is recorded in a national database. As the birds migrate and people see their bands, the information can be recorded in the database so we may be able to see where they go. Citizens can be scientists by helping us track these birds.”

The Spartan peregrine falcon chicks are recorded in the U.S. Geological Survey Bird Banding Laboratory. It serves as a resource for developing effective bird science, management and conservation.

While it is likely Freyja and Apollo will return to the Spartan Stadium nesting box next season, the chicks will not. But it is still possible they will find their way back to mid-Michigan.

“The female peregrine falcon in the nesting box at the Lansing Board of Water and Light — her name is Stelco — was banded as a chick in the Jackson area,” says Fedewa. “Wild falcons have really adapted to human activity and become an urban species. So hopefully, we’ll see them again.”

“One of the amazing things about this project is that it has been entirely student-driven. Seeing the looks on their faces has been so rewarding,” says Owen. “They are now part of MSU’s legacy.

“Really, if you want something done, get students involved. Their passion and enthusiasm are unparalleled."

The hands-on learning opportunities for the Fisheries and Wildlife Club members didn’t end with installing the nesting box. The students kept their followers updated via the club’s social media channels, experienced their first media interviews and honed their skills in public outreach and engagement. 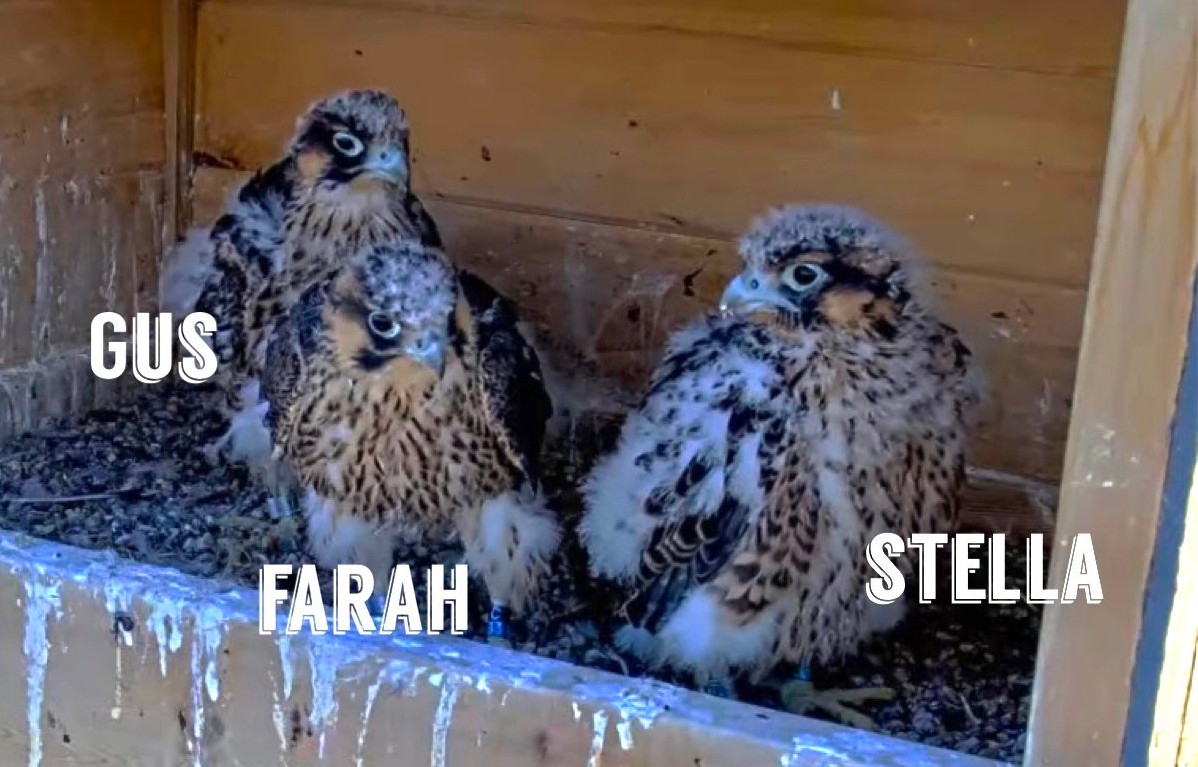 Photo courtesy of the Fisheries and Wildlife Club.

“As a club, we felt it was important to involve younger students. It could help them gain an appreciation and understanding of how close we are to falcons. The peregrines are right in our backyard but are easy to overlook,” says Engelman.

Students from the Sheridan Road STEM Magnet School in Lansing and the Utica Center for Science and Industry in Sterling Heights helped name the chicks. During the banding process, the chicks were identified as two females and one male. The students elected to name them Farah, Stella and Gus.

“I hope people take away from this a realization that it isn’t impossible to make a difference. You don’t need to be a biologist or scientist or even an expert,” says Engelman. “A bunch of students put this together. Go see what you can do.”