Alexie Milukhin is a senior studying social relations and policy in James Madison College. Milukhin has worked for the Educational Policy Innovation Collaborative, the Michigan Hispanic/Latino Commission, the Michigan Senate and MSU GEAR UP. After graduating, she plans to pursue a master’s degree in public policy. 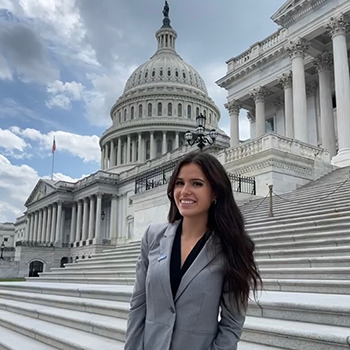 When I came back in-person to James Madison College, after a tumultuous year spent in quarantine, the last place I would have envisioned for myself was Capitol Hill. As a first-generation, low-income student who had spent the past year managing a local restaurant and waiting for the apocalypse to abate, my priority had been my day-to-day life, not future plans.

The start of my junior year signified a massive shift. I was able to pursue my academics and my career in full force, taking on 18 credits and working three jobs each semester. Mid-year I was approached by a friend who had heard about the Congressional Hispanic Caucus Institute, an internship program in Washington D.C. assembling a cohort of 32 Latinx students to be placed in a House or Senate Office for the summer duration (with housing arrangements, travel expenses and a stipend included). I decided to throw my name into the hat, excited for the opportunity, but privately worried that without any personal connections in academia or government, my efforts would be futile.

Ultimately, my grueling year paid off. When I received the phone call notifying me of my acceptance, I cried in public and called my mother. For me, this was not just an opportunity to enter politics. It was my only opportunity.

My experience with CHCI has provided me with more support, resources, information and connections than I have ever had access to. I was placed with the Office of Congressman Jesus “Chuy” Garcia of Chicago. 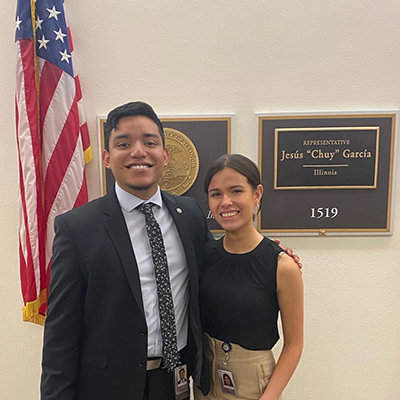 The privilege of being able to research, track and synthesize policy for a member who has been a longstanding advocate — not just for his community, but for working-class, low-income and Chicano people across the nation — was beyond my most fervent hopes.

Additionally, the experience of living and working in D.C. with a cohort of other first-gen Latinx students provided me with a community that has been integral to existing in an environment that can be at best nepotistic and at worst hostile.

Being in a place with so much concentrated power and affluence was disorienting. While running errands in the Capitol I (literally) ran into Bill Gates and Matthew McConaughey, got a hug from AOC and spoke with Dolores Huerta on multiple occasions. Being physically in the building, at least in the first few weeks, was so gratifying that I don’t know if anything will ever compare. Sometimes I would just sit in the rotunda, with the art depicting “American heroes” and think about my family. Of gulag survivors and Green Card overstayers. Of people who stash important documents in the mattresses and don’t have savings accounts.

Where’s our portraits? Our statues? I found myself looking too, in intern lectures, briefings, hearings. Where are we? 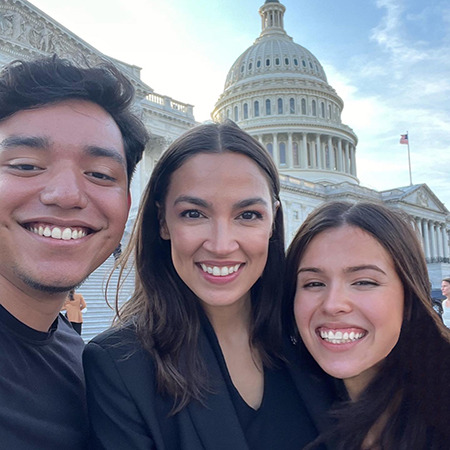 It’s a horrible juxtaposition, for a so-called nation of immigrants to have a tiny fraction in its governance halls. For a nation that is majority working class to be intentionally excluded from political processes that disproportionately impact them.

Of course, my presence, that of my cohort, and some of my other MSU peers on the Hill speak to progress for representation.

That progress doesn’t change the fact that only 1.76% of elected members of Congress are working class.

My summer has been inundated by so many lessons, many of them positive, but perhaps the most overarching has been the necessity for change. In Congress, the presence of people like me are not the standard, but the exception to a rule that should not exist. Thus, the end of my internship in no way signifies the end of the work.

On the flight home, I finally got to open the book gifted to each CHCI participant, “Navigating the Hill.” The front page had a simple inscription: “Reach back and bring others with you.”

This article has been repurposed from a student view originally published by James Madison College. For the original story, visit jmc.msu.edu.

National Hispanic Heritage Month is recognized at MSU and nationally from Sept. 15 to Oct. 15. To support Hispanic and Latinx students at MSU, visit givingto.msu.edu.