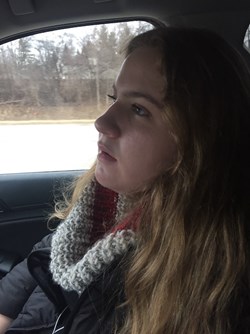 When I was 13 years old, I went blind after having an allergic reaction to the influenza virus. Within a few hours, I went from having 20/20 vision to having almost none. Although I realized my condition could have been much worse, I was still terrified that the loss of my vision was synonymous with the loss of my independence.

For the next few years, I spent much of my time gaining new skills and the confidence to navigate the world independently as a blind person. Still, I was nervous to enter college, where not everyone would have the same beliefs I did about my disability.

The first time I met with an RCPD specialist, she put me at ease. I was worried that my college experience would either consist of constant advocacy to get accessible materials and accommodation, or I would be treated as though I wasn’t capable of doing the work needed in my courses. Instead, I discovered that the resource center adapted to the individual.

Each disabled person is different and would require a different level of accommodation, so the RCPD allows the student to decide how much of their services to use. They also provide strong support if a student is struggling with an inaccessible part of a course or a professor who disregards their accommodation.

Throughout my time at MSU, I have utilized the services of the RCPD to complete aspects of my courses that were not readily accessible for me to do on my own. Many of these experiences were aided by a student organization called Tower Guard, which is associated with the resource center.

Tower Guard consists of top academically achieving second-year students at the university who help students registered with the RCPD to complete tasks that they may have a difficult time with on their own. For example, I had Tower Guard students help me with math and coding assignments, reading exams and creative class projects.

With the support of the RCPD, I was able to navigate academic spaces at Michigan State University smoothly. Of course, courses were challenging, but I never felt as though I was unable to complete any part of a class because of my blindness. The RCPD’s philosophy on disability also fosters a culture of maximizing, rather than limiting, ability and opportunity in their students.

When presented with a problem, the first response is always trying to find innovative ways to come up with a solution, which is beneficial for everyone involved. I would strongly encourage any student with a disability to utilize their services, as it really does make a difference in your education.