Esme Bailey is a senior majoring in English and minoring in Teaching English to Speakers of Other Languages and American Indian and Indigenous Studies. She grew up in Mount Pleasant, Michigan, near the Isabella County Indian Reservation. She was awarded a 2022 CREATE! Micro-Grant through the College of Arts and Letters and supported by the MSU Federal Credit Union. 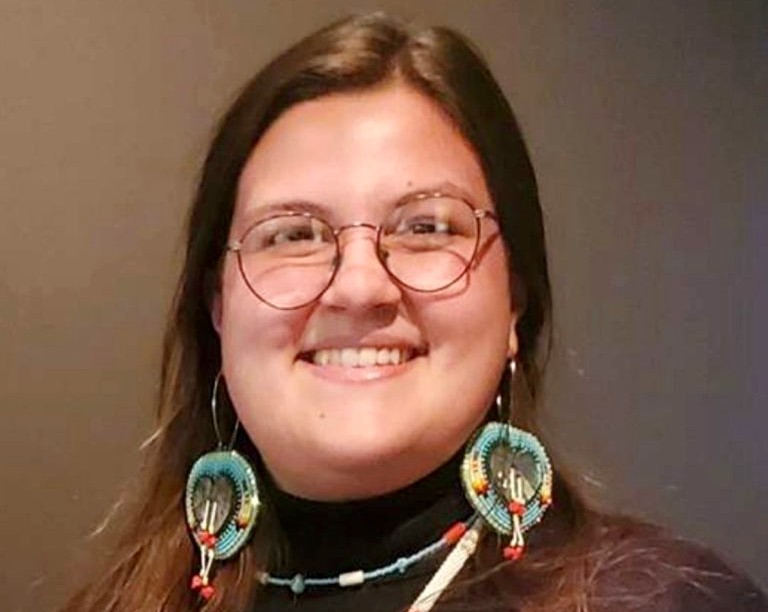 I applied for the CREATE! Micro-Grant because I wanted to make a set of jewelry that consisted of a medallion and a pair of earrings designed as a contemporary version of traditional Anishinaabe beadwork. I was thrilled to be selected as a grant recipient and I was so excited to get to work on my art.

Using symbols that represent certain meanings within the Anishinaabe culture, I have incorporated significance into my project that repesents my journey of personal growth since the COVID-19 pandemic began.

My name in Anishinaabemowin is Gaagegiiziigokwe, which is the title of my project. Gaagegiiziigokwe translates to English as “Night Sky Woman,” and the night sky is the central theme of my creation. By making myself the central theme of the medallion, working on it acted as a good medicine for myself when I was having real-life struggles as a result of COVID-19. Truly, my creative process centered around how I felt I needed to heal and that others most likely need to heal too, which I hope can be felt through the hug of the Night Sky Woman on the medallion. Besides Night Sky Woman, other symbols will be represented on my medallion. The color choices of the sky are the spirit colors that coincide with my name. The mukwa (bear) print in the sky represents my dodem (clan). The dibiki-giizis (moon) being that of the night I was born. The string that looks like paper dolls are a never-ending circle of connection between people. The four colors, black, red, yellow and white, also represent the colors of the medicine wheel. The seven stars in the night sky represent the seven generations that are often talked about in Anishinaabe cultures. The wiigiwams (small homes) represent themselves and the connection of community and family. The fires represent warmth, love and comfort. The bone beads from my grandfather making up the lanyard and the beads used throughout the medallion tie the generations of my family together.

Surprisingly, when I finished, I also noticed symbolic details that were unintentionally included.

While this project consists of a medallion and earrings, I am inspired to create a full regalia one day. It is my biggest and most hopeful dream to be able to enter a powwow arena to the beat of a drum and to tell my story through beadwork, leatherwork, love and all the hard work that goes into making pieces for regalia. The one takeaway that I hope others see is simply “healing.” Through this piece, I felt as if I hugged a younger version of myself who was called slurs in middle school for being too white or too Native. I told her that we have an identity and nothing, not a government number or a neighbor, would be able to tell us who we are. I want viewers to feel as if the Night Sky Woman is embracing them next to the warm, soft glow of hot embers and beside the slow-flowing river.

My project is influenced by my culture as an Anishinaabekwe (Anishinaabe woman). Other than culture, my art is forever influenced by the generations of beaders, quill workers and artists that I come from. I find pride and hope in the sense that the past one or two generations and I are able to dance traditionally, to sing, to drum and, in my case, to bead when so many of our ancestors were stripped of these cultural rights and privileges by centuries of forced colonization, assimilation and generational ethnocide. We, this seventh generation, are our ancestors’ wildest dreams.

November is Native American Heritage Month. To support American Indian and Indigenous Studies programming at MSU and within the local community, visit givingto.msu.edu.

The 2022 CREATE! Micro-Grant online student exhibition will launch later this year during the fall semester and will showcase the 12 student projects.

This piece was adapted from a story on the College of Arts and Letters website.