Nate Howder is a senior from Arlington, Virginia, who is majoring in entomology. He has been a leader in reinvigorating the MSU Bug Club and has volunteered at the Smithsonian Museum.

I’ve always been interested in animals in general. I spent a lot of time as a child looking under rocks in our yard for bugs with my dad. As I got older, I moved away from my interest in bugs and focused more on other animals. 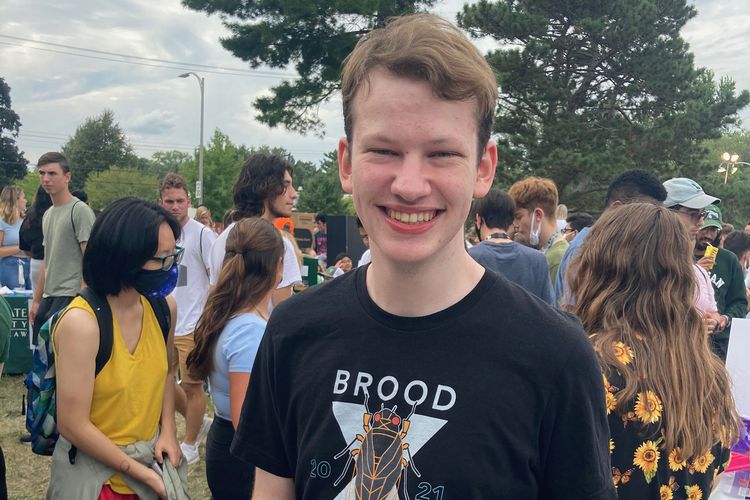 I took an animal science class in high school through the Arlington career center and found that I had as much interest in the dubia roaches they raised there to feed other animals as I did the animals they were being fed to. During the following year I began raising dubia roaches and hissing cockroaches for myself.

In high school, I volunteered at the Smithsonian Museum. Being at the Smithsonian was a really fun and rewarding experience. I started as volunteer in Q?rius, a hands-on part of the museum aimed at kids. I learned how to facilitate various activities and engage with the museum visitors. We also got to take objects from Q?rius to a cart in the hall and present them to visitors however we saw fit.

I always enjoyed taking replica skulls out on the cart, specifically a human skull, an adult gorilla, and a baby gorilla and having guests compare them. The human skull and the baby ape skull have much more in common than either have with the adult ape skull. So, comparing the skulls shows how humans display neoteny, delayed physiological development, when compared with apes.

I met a lot of really cool people while I was working there and three of my closest friends today are other volunteers from my cohort. In my last couple months at the Smithsonian, I was trained to work in the Insect Zoo. There I worked on a cart handling live insects such as hissing cockroaches and tobacco hornworms, helped instruct and manage visitors inside the Butterfly Pavilion and helped facilitate tarantula feedings. Unfortunately, my time there was cut rather short by COVID.

My best experience with entomology has been working as the vice president of the MSU Bug Club. Working with club president Osten Eschdor to make Bug Club a worthwhile organization has been so satisfying. We basically redesigned it from the ground up; we planned out so many new meeting ideas to find a good balance of usefulness and fun.

When I first joined, the only people we could count on attending our meetings, which were online with Zoom, were the executive board members. Now we have more than 150 members of our discord and consistently get around 15-20 people in addition to our board at every meeting. It makes me feel very happy to have succeeded in reviving the club.