Many people in the U.S. may consider Tuberculosis a disease of that past with little impact on populations today; that would be a misunderstanding. In fact, globally, about 1.5 million people die from TB each year, even with antibiotics available to fight disease, according to Andrew Olive, Ph.D., an infectious disease researcher in the Michigan State University College of Osteopathic Medicine’s Applied Immunology Center for Education and Research. 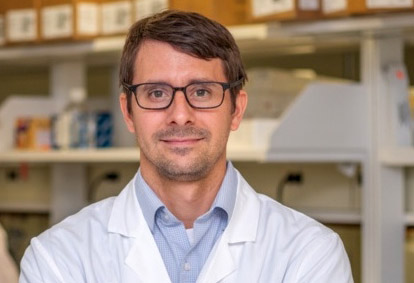 “We can treat patients with TB, but it is long and difficult,” Olive said.

His goal is to cut treatment time and help more people, while also finding new answers for prevention and treatment of TB and other lung diseases. Two research awards totaling $4.6 million-plus were received by Olive in July and will help his team continue its research to understand immune protection against TB, as well as help for those suffering from other lung diseases, such as COPD and lung cancers.

A $2.6 million-plus award from the National Institute of Allergy and Infectious Disease to Olive will use the tools his team has already built while investigating how immune cells known as macrophages respond to infections with Mycobacterium tuberculosis, the causative agent of TB. The new research will seek ways to cut therapy times – currently a minimum of six months when treating TB patients – and will look to develop host-directed therapies to prevent pulmonary TB disease progression.

The other research grant of more than $1.9 million from the National Institute of General Medical Sciences will use a new model of lung-specific macrophages, known as alveolar macrophages, to help understand fundamental lung biology.

“We will be looking at how people maintain lung function when they do not have disease and the changes that occur when the lungs are plagued by infection or disease,” Olive said. “To understand the immune responses in the lungs, we first need to understand lung biology, in general.”

The research will look at how alveolar macrophages are maintained in the lungs to support pulmonary function and how attacks from pathogens or environmental pollutants change these macrophage functions, leading to inflammatory damage of the lungs. This research will help to identify how the lung macrophages control inflammation, which may enable new therapies to treat lung damage caused by infections, including SARS-CoV-2 or Mycobacterium tuberculosis, in addition to autoimmune conditions such as Systemic Lupus Erythematosus.

Olive’s lab is part of AICER’s Infectious Disease and Environmental Immunology area. AICER is focused on research discoveries in immune-therapeutics to move into the clinical arena, and ultimately into clinical practice, while also training tomorrow’s researchers.

This story originally appeared on the College of Osteopathic Medicine website.