How a little prairie can help farms and nature

The world is facing two huge, interconnected challenges. We need to feed the planet’s population, and at the same time, the way we grow our food is helping fuel the loss of the planet’s natural biodiversity.

But addressing one challenge need not come at the expense of the other. In fact, new research from Michigan State University is showing that bringing a little prairie back to farms in Michigan and other parts of the Midwest could help preserve both biodiversity and crop yields. 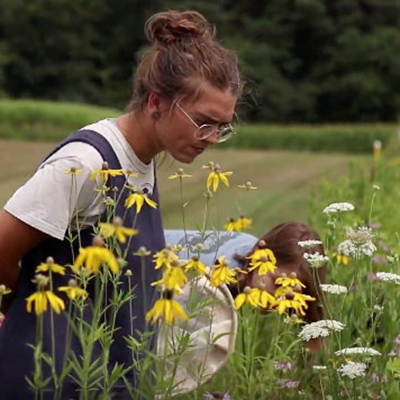 Lindsey Kemmerling, who earned her doctorate from MSU in 2022. Credit: KBS

“The goal is to do both simultaneously in the vast area planted in row crops,” said Lindsey Kemmerling, the first author of the MSU-led study published May 10 in the journal Frontiers in Ecology and Evolution. “We need to make this land habitable for species and for the ecosystem services the increased biodiversity can provide to the farms.”

Kemmerling earned her doctorate while working on the project in the lab of Nick Haddad, a professor at MSU’s W.K. Kellogg Biological Station in the College of Natural Science’s Department of Integrative Biology and in the Ecology, Evolution and Behavior program.

Haddad, Kemmerling and their colleagues studied a variety of current farmland management practices with a twist. Working at the W.K. Kellogg Biological Station, or KBS, they selected narrow regions in research fields where, instead of crops, they planted prairie vegetation native to southwest Michigan. These regions grew into what are known as prairie strips, slivers of land that increase biodiversity by attracting native pollinators and other organisms that are less prevalent on developed land.

The team showed that a prairie strip’s flora and fauna brought an array of beneficial “ecosystem services” to the strips and the surrounding farmland. For example, the prairie strips attracted more pollinators and increased pollinator activity near the strips.

When combined with the right field management practices, the array of benefits gained by adding a prairie strip essentially offset the loss of cropland. That is, prairie strips could be implemented without compromising crop yield. “Prairie strips have broad-ranging effects — including improved soil health and increased biodiversity,” said Haddad, who is also the director of the Long-Term Ecological Research, or LTER, site at KBS. “We were excited to see that the benefits of prairie strips for biodiversity and ecosystems in the strips spilled over into cropland.”

“The most surprising thing to me was how quickly we saw the changes,” said Kemmerling, who is now a postdoctoral research associate at the University of Minnesota. The team measured positive changes within the first year of establishing the prairie strips, and some of those advantages became more pronounced in the experiment’s second year.

“It’s promising to see these changes develop as the prairie strips are maturing,” Kemmerling said. “It’s exciting to think about a few years ahead and how they’ll be performing, I think particularly for biodiversity and for carbon accumulation in the soil.”

Although Kemmerling may no longer be at KBS to watch those changes unfold, rest assured that the plots will have their stewards, continuing a tradition that dates back more than three decades. Working with collaborators from Hawai’i Pacific University, the University of Puerto Rico and the U.S. Department of Agriculture, the MSU researchers measured a range of dynamic ecosystem attributes in and around prairie strips. One of the reasons they could do that is tied to the LTER site itself, which has been running since 1987.

“We’ve been working in these plots for over 30 years. We have a deep understanding of how the ecosystems here work and how farming practices affect those,” Haddad said. “We can do things here that can’t be done anywhere else.” The National Science Foundation supports a network of 28 LTER sites located across the U.S., French Polynesia and Antarctica that enable ecological studies that would otherwise be impossible. The KBS LTER site is one of those, providing invaluable insights for the Midwest, America’s breadbasket.

“KBS LTER is unique among the LTER sites because it is agricultural,” said Sarah Evans, a coinvestigator on the new study. Evans is an associate professor with KBS, the College of Natural Science and the Ecology, Evolution and Behavior program at MSU.

Most other LTER sites are on unmanaged lands, providing critical information about how native ecosystems are responding to large-scale, long-term influences such as climate change. But humans and agriculture are subject to those same forces while facing a host of unique challenges and considerations. The KBS LTER site lets scientists work to understand all of those.

“I feel proud that KBS research is relevant and important given that half of global land area is managed or human dominated,” Evans said. “We get to study how humans interact with nature and still identify ecological principles in these managed systems.”

The idea of integrating prairie strips in the middle of managed farmland was on Haddad’s mind when he joined MSU about five years ago and became the lead principal investigator of the LTER site. At the time, people were becoming more aware of the potential of prairie strips, thanks in large part to studies from Iowa State University. Researchers there were showing that prairie strips could slow erosion and prevent agricultural runoff water from reaching natural water systems. 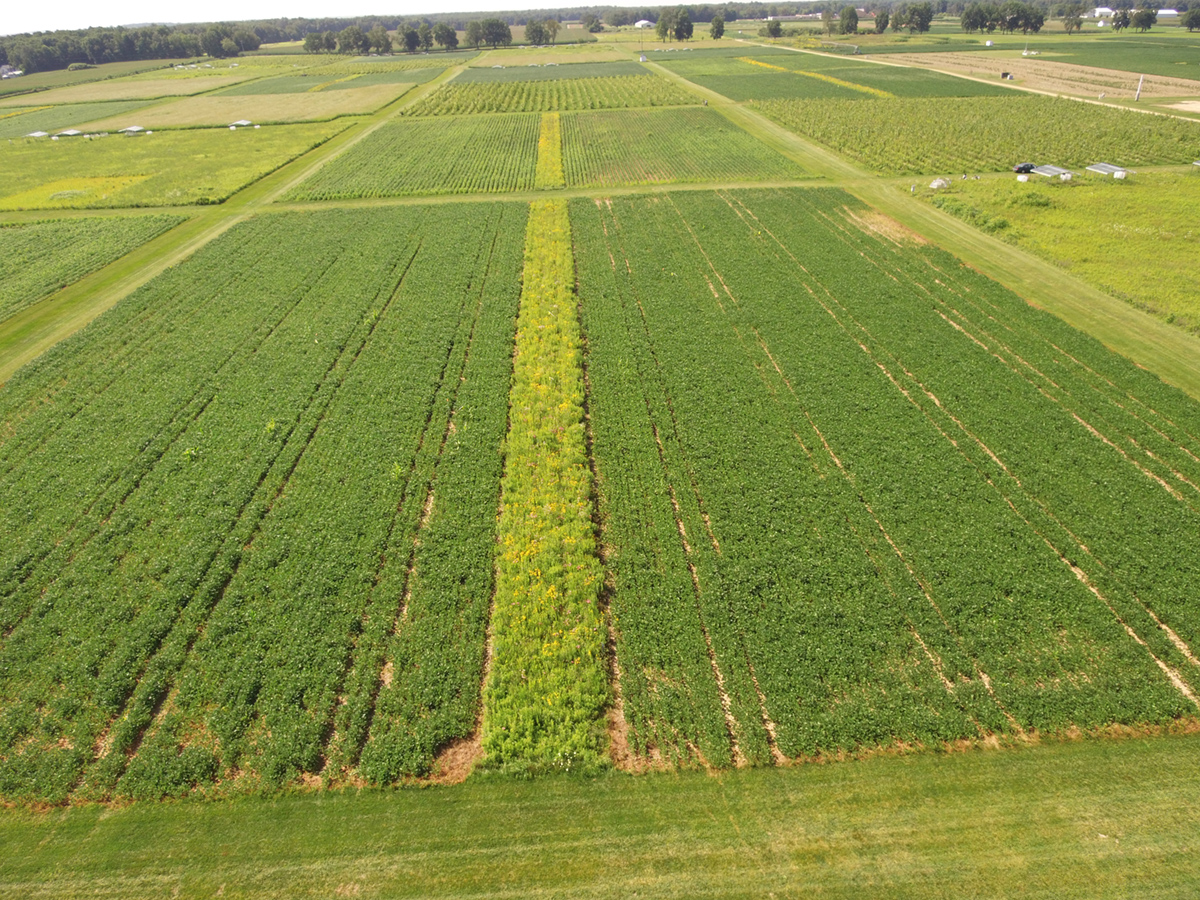 Haddad and his colleagues wondered what other benefits the prairie strips could bring to farms in Michigan and throughout the Midwest, where roughly a quarter of agricultural land was once prairie. As scientists, they knew the prairie strips would offer ecological advantages, but they also believed the strips would make economic sense for farmers.

Prairie strips are straightforward to cultivate and, thanks again to Iowa State research, they have recently become eligible for subsidies from the USDA. Plus, when grown parallel to crop rows, the strips don’t interfere with conventional farm equipment.

The researchers also approached the study with a range of interests and expertise to probe multiple aspects of prairie strips and their implications for nature and for farmers in places like Michigan. Annabelle McCarthy, research technician in the Haddad Lab, surveying for butterflies in a plot alongside a prairie strip. Credit: Jamie Smith 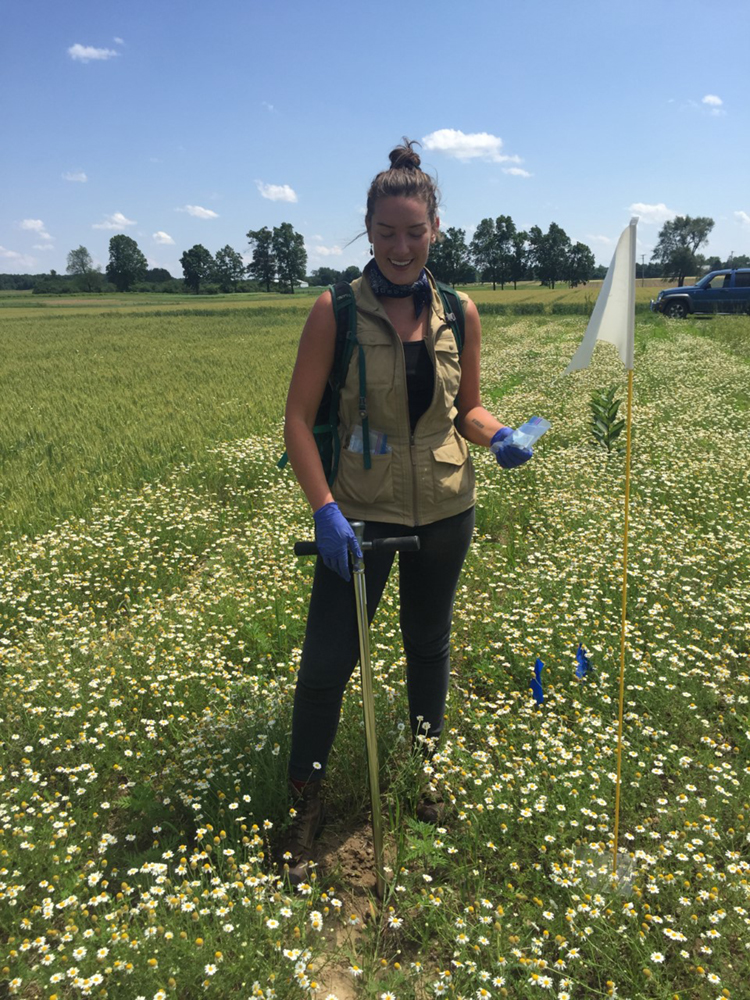 “Going into this project, one of the major unknowns was how the benefits of prairie strips translate to Michigan, a region with different ecology and agriculture than what was studied in Iowa,” said Corinn Rutkoski, a doctoral student in the Evans lab. “We found there’s immense potential for prairie strips to benefit Michigan farmers and ecosystems.”

The research team, which also included MSU research assistant Jamie Smith and professional aide Esbeiry Cordova-Ortiz, revealed the most comprehensive picture to date of prairie strips’ benefits in the northern part of the Midwest.

In addition to increasing pollinator abundance and activity, prairie strips also bolstered a plot’s natural pest defenses with a larger abundance of spiders, and they attracted more dung beetles, which can break apart manure and liberate nutrients for plants and soil.

The researchers also saw an uptick in soil carbon that was readily available to microbes, which is good for soil health and an indicator that, over time, the plots could start sequestering more carbon from the atmosphere, Rutkoski said. The prairie vegetation also grew larger and deeper root systems than annual crops, further enhancing a plot’s carbon-storing capacity.

Finally, the researchers also quantified the ants in and around the strips, which can help keep pests down and disperse plant seeds. However, the team did not link any significant benefit to these insects from the prairie strips — yet. 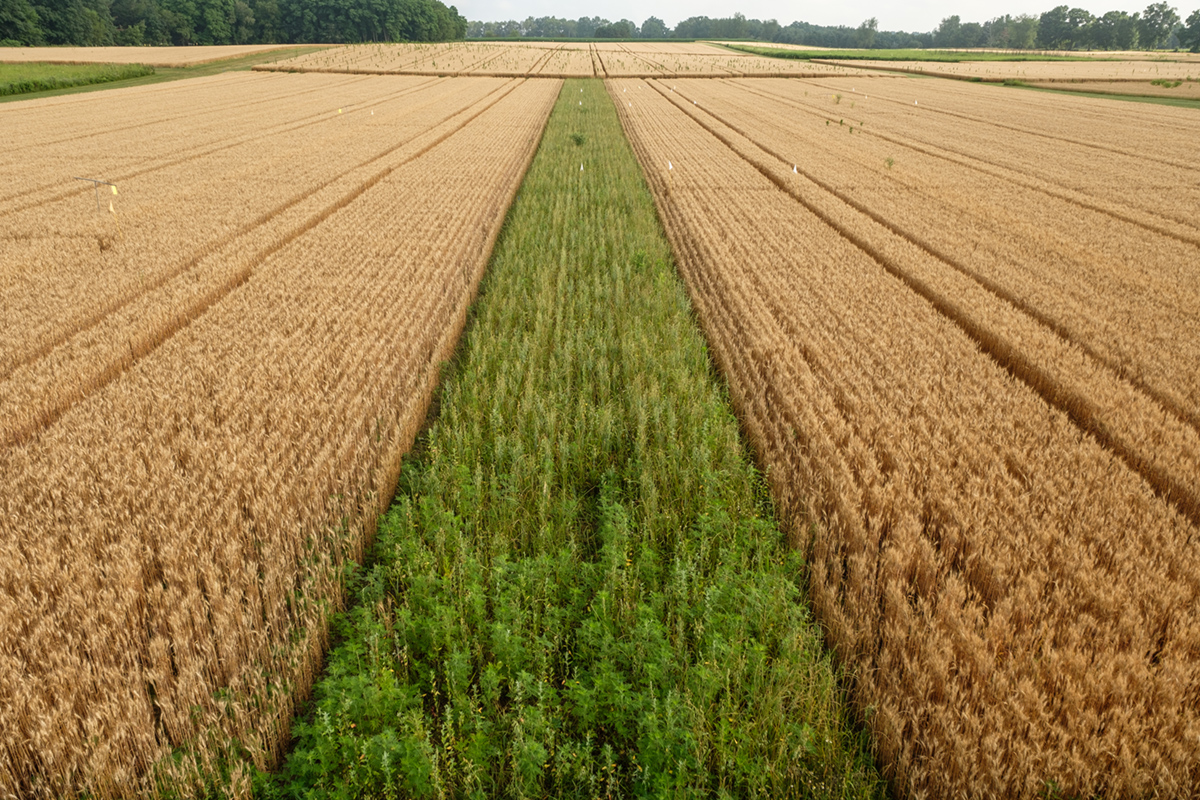 Prairie strips, like the one shown here, can be integrated into farmland to promote soil health, increase biodiversity and diminish carbon footprints without sacrificing crop yields. Credit: Kurt Stepnitz Photography

All told, there were many reasons to help farmers bring prairie strips to their land, which the researchers are working to do now through what’s called the MiSTRIPS program. But the researchers also stressed that prairie strips aren’t a one-size-fits-all solution. They’re designed for farms that were once home to native prairies.

“Prairie strips won’t be appropriate for every region,” Rutkoski said. “But there are opportunities to introduce other native plant communities — savanna and woodland, for example — that increase habitat, biodiversity and ecosystem services in ways that benefit nature and people. We hope this work will help springboard future farm diversification.”

“Prairie strips are one method for changing how we do agriculture,” Kemmerling said. “They’re a piece of the puzzle.”