A ‘pilot light’ for photosynthesis

Spartan researchers reveal processes that keep a plant’s energy balance in check during changing conditions, which could lead to more efficient crops

Michigan State University’s Thomas D. Sharkey has a gift for exploring the intricate biochemical mechanisms of photosynthesis, the life-sustaining reactions that plants use to grow literally from thin air. 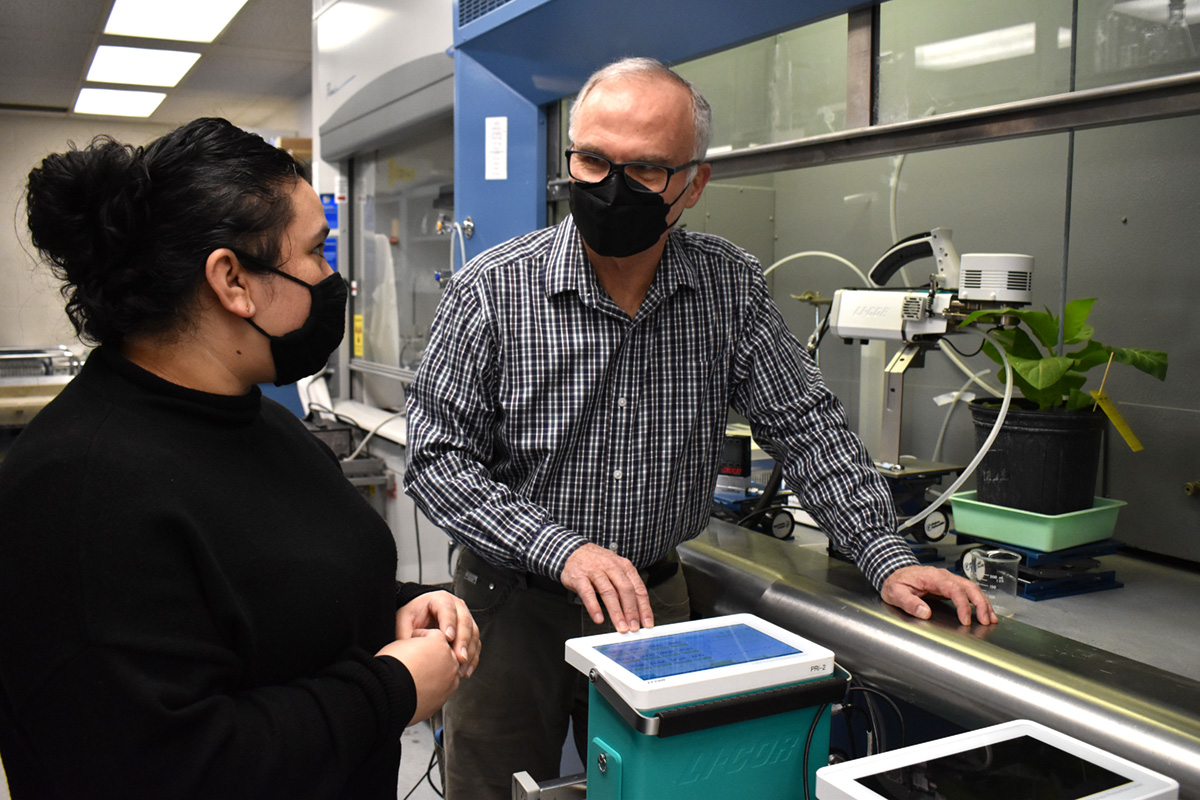 The University Distinguished Professor also has a gift for explaining those complex processes with metaphors and much simpler, more familiar machinery.

Both skills are on display when Sharkey talks about his team’s new paper, published on March 8 in the journal Proceedings of the National Academy of Sciences, describing what they call a pilot light for photosynthesis.

By understanding how plants stay primed to produce sugars in varying degrees of sunlight, Spartans are working toward a future when growers can raise more efficient crops used as food and biofuel.

“I grew up near Detroit, so I use a lot of automotive analogies,” said Sharkey, a professor of biochemistry and molecular biology in the College of Natural Science. “If you want to make a better car, it’s not just about putting in a better engine.”

If a plant’s the car, the core reactions of photosynthesis are the engine powering it. But there are also myriad processes supporting that core.

“We’ve got the engine, but we need to improve the handling, the brakes, the radiator and so much other stuff that’s essential. That’s what we’re working on now,” said Sharkey, whose group is part of the Plant Resilience Institute and the MSU-DOE Plant Research Lab, which is supported by the U.S. Department of Energy.

“Using new approaches, we’ve been able to refine our understanding of how photosynthesis makes sugars,” he said.

Many of us have popped the hood on plant biology and given the photosynthetic engine a quick inspection in science class. Fueled by sunlight, plants convert water and carbon dioxide into sugar.

This core reaction takes place inside plant cells, which have evolved all sorts of auxiliary processes and mechanisms to support it. As such, photosynthesis is a precision operation. Anything off-kilter when taking in the sun’s energy and outputting energy-storing molecules can have severe consequences for the plant within seconds.

“We’re still trying to work out how everything works together,” Sharkey said. “If the whole system isn’t completely in sync, it collapses.”

However delicate the balance, plants have somehow adapted to maintain it while relying on a fickle ingredient: sunlight. The sun’s intensity fluctuates when clouds block the sun and when wind twists leaves away from the sun’s rays. So how can a precision system cope with a fuel that goes from low-flow to full-blast without warning? 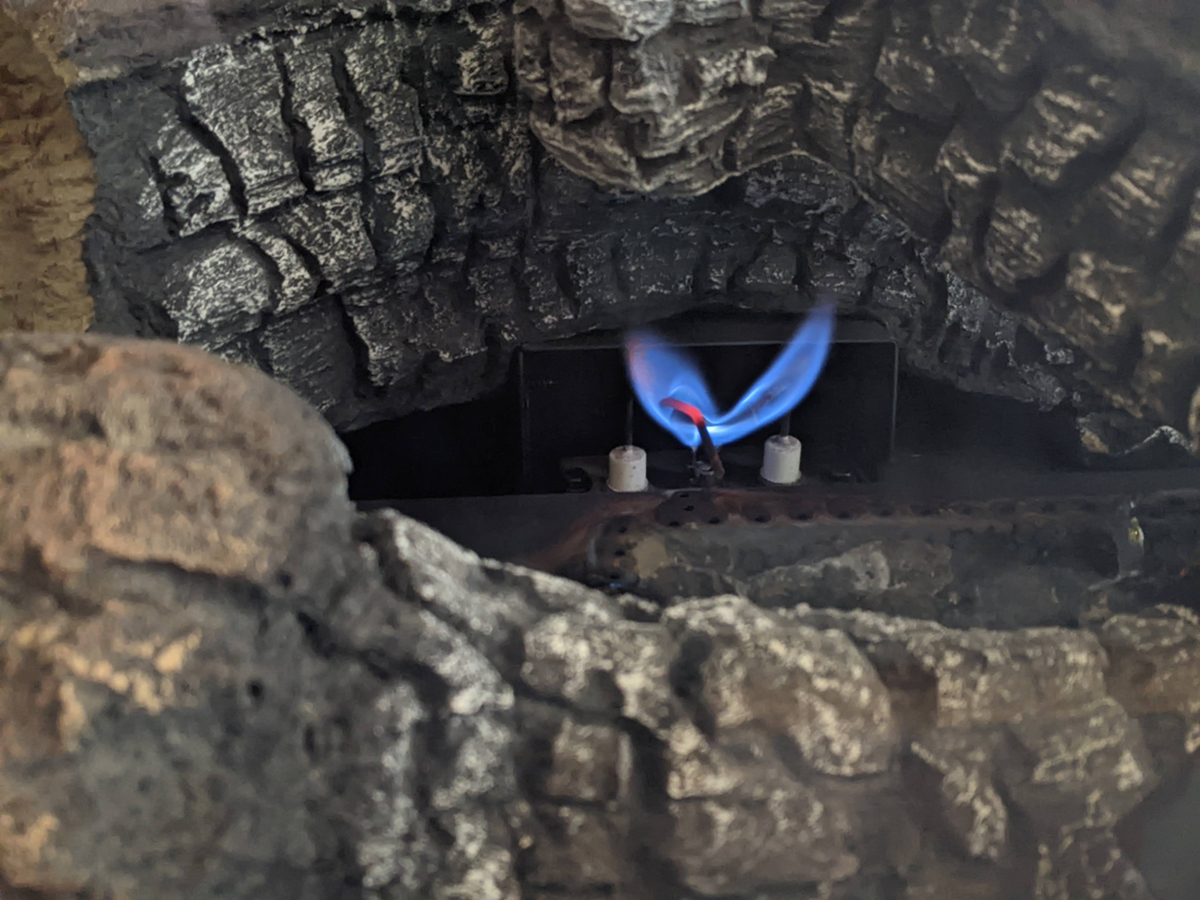 The pilot light in this gas fireplace is constantly running to make sure the main burner ignites easily when needed. Spartan researchers have discovered an analogous metabolic "pilot light" that plants use in photosynthesis. Credit: Matt Davenport

That’s what Sharkey and his colleagues have found in their “pilot light,” which is actually three distinct processes in the plant. Between the processes, plants make sure that input energy goes into making harmless metabolites when conditions aren’t right for the main burner of photosynthesis to be running. When those conditions return, the processes help ignite the main system without missing a beat.

Science has known that there were two processes since the early 1990s, when Sharkey did foundational work on them. Discovering that third component of the pilot light was a complete surprise thanks in large part to acquiring what was lacking decades ago.

“We weren’t able to do much more then because I didn’t have the depth of colleagues and other essential components needed,” he said.

Joining Sharkey on this project were research associate Yuan Xu, graduate student Joshua Kaste, Professor Yair Shachar-Hill from the Department of Plant Biology and Thomas Wieloch, a researcher at Umeå University in Sweden.

The work was also enabled by the MSU Research Technology Support Facility Mass Spectrometry Core. Using the core’s technology, the team could measure very small differences in the mass of different plant metabolites to better understand how and when they were made during photosynthesis.

“I feel really lucky that we have such diverse talents at MSU in plant sciences. Each member of the team contributed something unique,” Sharkey said. “Working together allows us to do things we couldn’t do on our own.”

This work was supported by the Department of Energy, Basic Energy Sciences Division.