Michigan State researchers have helped peer inside a nova — a type of astrophysical nuclear explosion — without leaving Earth.

These stellar events help forge the universe’s chemical elements, and Spartans helped explore their nature with an intense isotope beam and a custom experimental device with record-setting sensitivity at the National Superconducting Cyclotron Laboratory, or NSCL. The team published its work May 3 in the journal Physical Review Letters. 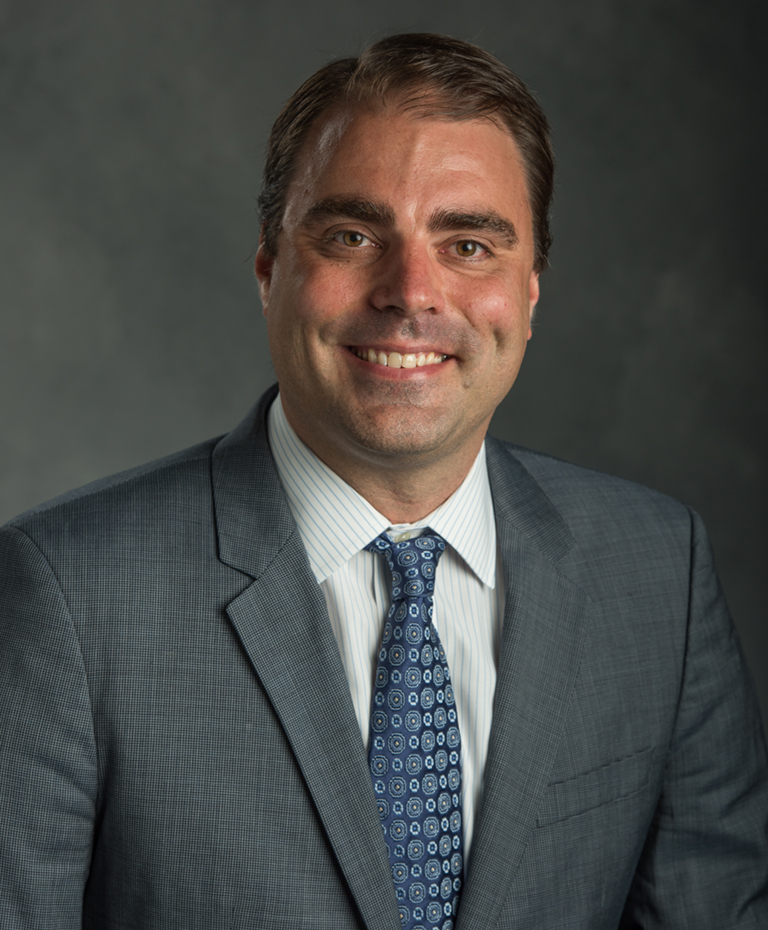 Christopher Wrede, a professor with MSU and FRIB

“We’ve been working on this project for about five years, so it’s really exciting to see this paper come out,” said Christopher Wrede, a professor of physics at the Facility for Rare Isotope Beams, or FRIB, and in MSU’s Department of Physics and Astronomy. Wrede, an MSU/FRIB faculty member, led the international research project.

NSCL was a National Science Foundation facility that served the scientific community for decades. FRIB, a U.S. Department of Energy Office of Science user facility, officially launched on May 2. Now, FRIB will usher in a new era of experiments that empower researchers like Wrede to better test and verify scientific theories explaining the cosmos.

For example, with their experiments at NSCL, the researchers provided a better calibration for what are known as “nuclear thermometers.” The experimental results improved the precision of calculations scientists use to determine the interior temperature of novae — the plural of nova. With its results, the team confirmed that the interior of a nova named V838 Herculis was about 50,000 times hotter than the surface of the sun.

“Ultimately, the information we extracted from our experiments reduced the uncertainties in this calculation by a factor of two to four,” Wrede said. “We were actually surprised at how close it was to the temperature we expected.”

This agreement helps solidify theories underlying the nuclear physics of novae, which is saying something. Our understanding of novae has come a long way since people first observed them hundreds of years ago — a fact exemplified by the name nova itself, which means “new.” 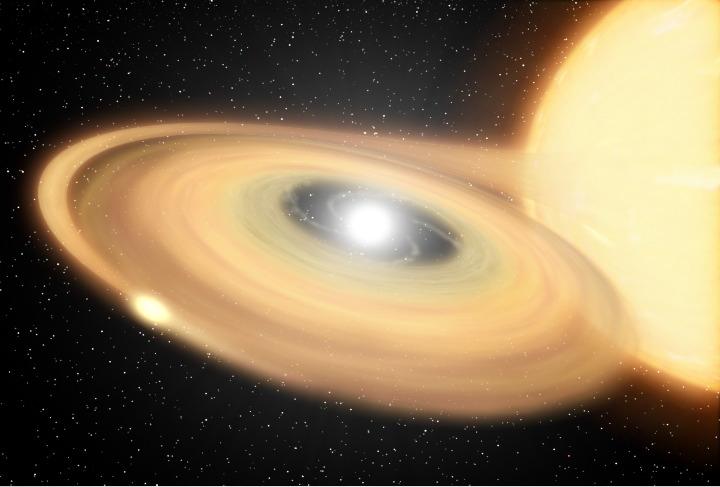 An illustration of a classical nova shows a bright white dwarf star near the center accumulating fuel in an orange disc from its neighboring main sequence star (shown in bright orange). Credit: NASA/JPL-Caltech

“A long time ago, if something in the sky popped out of nowhere, you can imagine people thinking ‘Wait a minute. What the heck is that?’” Wrede said. “‘It must be a star that wasn’t there before.’”

Scientists have since learned that novae are not new stars, but distant extant stars that become visible on Earth when they explode or trigger explosions. Perhaps the best-known example of a “new star” is a supernova, which is when an entire star explodes. In our galaxy, the Milky Way, this is comparatively rare, happening once every hundred years or so.

The nuclear reactions Wrede and his team study, however, are found in what are called classical novae, which are more common in our cosmic neighborhood. Scientists observe about a dozen in a typical year, often aided by amateur astronomers. And, because a star doesn’t explode completely in a classical nova, the same one can appear more than once (although the typical time between appearances is about 10,000 years, Wrede said).

A classical nova is created by two stars orbiting each other closely enough that one star can siphon nuclear fuel from the other. When the siphoning star borrows enough fuel, it can trigger an energetic series of nuclear explosions.

Understanding the nuclear processes of all stars helps researchers understand where the universe’s elements come from and those involving two stars are particularly important in the Milky Way, Wrede said.

“About half of the stars we see in the sky are actually two-star systems, or binary star systems,” he said. “If we really want to understand how our galaxy is working to produce chemical elements, there’s no way we can ignore them.”

Wrede has been studying a specific nuclear reaction within novae that, in nature, involves versions, or isotopes, of phosphorus. Phosphorus inside a nova can gobble up an extra proton to create sulfur isotopes, but unfortunately, scientists can’t recreate this reaction at stellar conditions on Earth. So Wrede and the team did the next best thing.

They instead started with chlorine isotopes that decay into sulfur isotopes. They then watched those sulfur isotopes spit out protons to become phosphorus. It’s the reaction of interest in reverse, which lets the researchers essentially synthesize an instant replay of the action that they can rewind to better understand nature’s playbook.

A photograph of the GADGET detector. Credit: Courtesy of the Wrede Lab

But there was another wrinkle. To achieve its goal, the team needed to take record-setting measurements of the lowest-energy protons that came out of the sulfur. To do this, the researchers built an instrument they’ve dubbed the Gaseous Detector with Germanium Tagging, or GADGET.

“These protons have really low energy, and using conventional techniques, the signal would get swamped by background,” Wrede said. GADGET took an unconventional approach — using a gaseous detector component instead of solid silicon — to achieve the sensitivity needed to see the protons.

“In terms of sensitivity, it’s a world record,” Wrede said.

Of course, the tools and techniques are just part of the equation. The team also needed the talent to build the instrument, run the experiments and interpret the data. Wrede, in particular, commended Spartan graduate student researcher Tamas Budner, the first author of the paper who had a hand in each phase of the project. 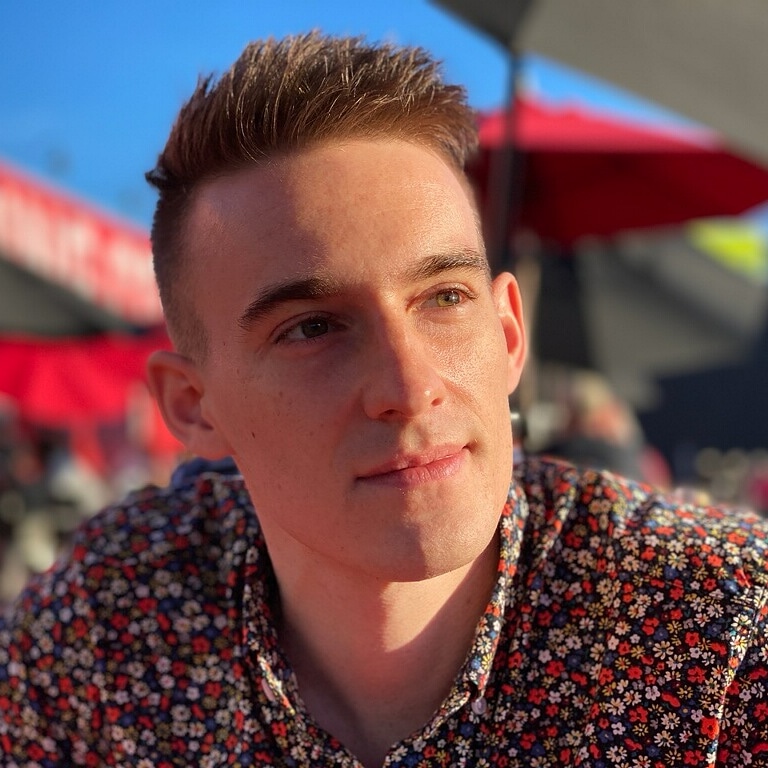 Budner will be earning his doctoral degree this summer from MSU’s top-ranked graduate program in nuclear physics thanks in no small part to this project, which he called serendipitous. When he first started his grad program in 2016, he didn’t know whose lab he’d work in or which project he’d take on.

"When I came to MSU, I didn’t really know what I wanted to work on. But it seemed like an exciting environment where people were working on lots of different things with a lot of cool, cutting-edge technology,” Budner said.

“I emailed Chris about this project, and it checked a lot of boxes for me. I’d get to see all the steps involved in the process: building a new detector, doing a new experiment and analyzing the data,” he said. “It had all the things I wanted to try.”

Also joining the Spartans on this project were researchers from around the globe. Team members hailed from institutions in France, Spain, China, Israel, Canada and South Korea. There was also a domestic cohort of collaborators joining from the University of Notre Dame in Indiana and Oak Ridge National Laboratory in Tennessee. 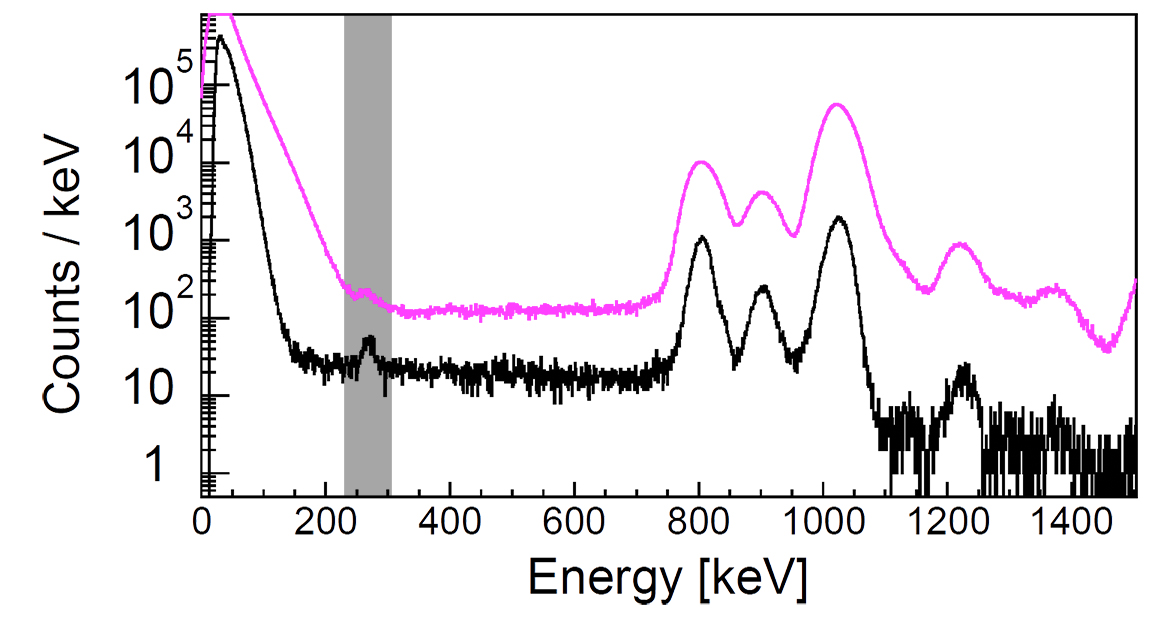 This graph shows proton detection data from the GADGET instrument. Readings from a single detector pad are shown in black and an aggregated signal from five pads is shown in pink. In both curves, several peaks are obvious above energies of about 800 keV, or kiloelectronvolts. What GADGET allowed researchers to detect was the important but tiny blip at the low energy of 260 keV (highlighted with a gray bar). Before these measurements, a proton peak this weak from this type of nuclear process had never been detected below 400 keV. Credit: Phys. Rev. Lett.

MSU, though, was the epicenter of the experiments as home to NSCL, which provided the requisite high-intensity beam of chlorine isotopes. Now FRIB will carry on the tradition of NSCL, continuing to attract top researchers from around the globe to answer some of science’s biggest questions with experiments that aren’t possible anywhere else.

And Wrede’s team will be part of that. It already has the approval to run a new experiment at FRIB, with a new GADGET system to boot.

“We’ve already upgraded GADGET. We call it GADGET 2,” Wrede said. “It’s a much more complex system and can measure protons even more sensitively.”

NSCL was a national user facility funded by the National Science Foundation, supporting the mission of the Nuclear Physics program in the NSF Physics Division.