The life history theory was developed in the 1950s in an attempt to explain how natural selection has molded organisms’ behavior, lifespan and reproduction.

Tyler Firkus, a doctoral student in the MSU Department of Fisheries and Wildlife, said that while the theory gives predictions about how organisms may react to parasitism, few studies have provided empirical evidence.

Firkus works in the lab of Cheryl Murphy, and both are co-authors of a recently published paper in the journal Integrative and Comparative Biology.

Before starting laboratory trials, the team developed a life history conceptual model based on known information about siscowets and leans, two lake trout ecomorphs of the same species.

Leans favor shallow, warmer water and grow more quickly than siscowets, which are found in deep, cold water and live longer than leans. Researchers hypothesized that leans would ramp up reproductive efforts in response to sea lamprey parasitism due to their shorter lifespans, while siscowets would favor energy storage and a long-term approach to successful reproduction.

To spawn or not to spawn?

For the study, researchers used 11- to 12-year-old leans and siscowets raised from eggs collected from wild adults in Lake Superior. Sea lamprey were gathered by commercial fishing operations in Lake Superior and Lake Huron, actively attached to a host.

Scientists placed individual siscowets or leans into a tank with one sea lamprey and recorded the duration of attachment. Sea lamprey were allowed to feed for no longer than four days, which prevented a lethal event. Other individual fish were placed in tanks with no sea lamprey to act as a control. 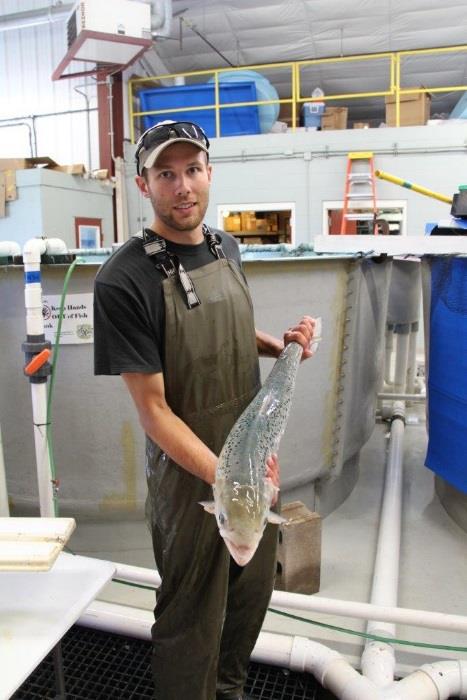 Once each trial was complete, the lake trout’s fat content, length and weight were measured, and the attachment site was graded for severity of the wound. The lake trout were then moved back to their regular tanks to heal.

Since spawning typically occurs for both siscowets and leans in early October, researchers monitored each fish from mid-September to early November following parasitism. The volume of eggs or milt — the sperm-containing fluid — was measured for each lake trout, and those that did not produce eggs or milt were considered to have skipped spawning.

“Leans produced more eggs than siscowets per gram of body weight, regardless of parasitism status,” Murphy said. “All female leans produced eggs as well, which tells us that one of their responses is to reproduce to ensure the next generation.”

Conversely, more than half of siscowets avoided spawning altogether, and those with more severe wounds skipped spawning at an even higher rate — 78%.  Since they live longer, Murphy said, siscowets have more opportunities to spawn. After parasitism, their responses focus on energy storage and survival, improving the likelihood of successful reproduction in the future.

“This is the first study we’re aware of that provides empirical evidence of life history tradeoffs in sea lamprey parasitism,” Firkus said. A second paper, published in the Journal of Great Lakes Research, expands on the initial project to examine the rate of sea lamprey parasitism on lake trout.

Firkus noted that the current visual examination procedure used to record sea lamprey wounds is unreliable. As attachment marks heal over time, it becomes difficult to identify and classify them with high accuracy. Additionally, sea lamprey sometimes attach to areas that don’t leave noticeable traces, such as the fins or gills.

To paint a clearer picture of the problem, researchers needed a biological marker unique to parasitism, and Murphy’s team has found it in blood.

Blood samples and wounding descriptions were taken from siscowets in the first experiment, both immediately following parasitism and again after seven months. This was compared to non-parasitized control fish.

For parasitized lake trout, scientists discovered that three functional classes of proteins were affected, including blood coagulation, immune response and lipid transport. The team identified an anticoagulant response in fish that experienced severe wounds, and some proteins did not fully recover in the seven-month timeframe. Less severely wounded lake trout showed an intermediate response.

These results suggest that blood coagulation could be a reliable indicator of sea lamprey attacks and their severity, and can persist long after parasitism when healing has progressed.

Murphy said that quantifying the blood clotting response could be a cost-effective way to evaluate parasitism rates when combined with wound observation. The next step is to further validate these findings when tested against a variety of potential environmental scenarios.

“This can help fisheries managers make important sea lamprey management decisions because it gives them a more accurate idea of parasitism rate,” Murphy said. “Wound identification and assessment is an important tool, but we think using these biomarkers can supplement that data.”

Partners on this project included Murphy, Firkus and Goetz, as well as Sarah Alderman and Oliver Bullingham from the Department of Integrative Biology at the University of Guelph, Ontario, Canada. This work was funded by the Great Lakes Fishery Commission with additional support from MSU AgBioResearch.