With nearly $11M from DOE, MSU is leading a collaboration to usher the US into new frontiers of clean energy with inspiration from microbes

With $10.65 million of support from the U.S. Department of Energy, Michigan State University is home to one of the nation’s newest Energy Frontier Research Centers.

Led by Cheryl Kerfeld, a Hannah Distinguished Professor in the Department of Biochemistry and Molecular Biology and the MSU-DOE Plant Research Laboratory, the center is exploring how nature compartmentalizes some of its most important biochemical reactions.

This understanding will allow the researchers to mimic nature’s methods to develop new and more efficient ways to produce important molecules and chemicals to benefit society, including clean, sustainable fuels.

“We’ll be taking not only the principles — like modularity and hierarchical assembly — but also some of the building materials that nature uses to compartmentalize reactions that would otherwise be toxic or inefficient,” said Kerfeld, whose lab operates at both MSU and Lawrence Berkeley National Laboratory. “If we’re successful, even partially, we can help address global challenges related to energy and the environment.”

The new center, called the Center for Catalysis in Biomimetic Confinement or CCBC, is one of 43 announced recently by the DOE, representing a nationwide investment of $400 million.

The CCBC assembles a group of experts from MSU, Berkeley Lab and Argonne National Laboratory. With members in academia and national labs, the team will leverage the unique benefits of both settings.

“It’s so much fun to work on a project like this. You get the best of both worlds,” said Eric Hegg, a co-investigator with the CCBC. Hegg is a professor of biochemistry and molecular biology and an associate dean of the College of Natural Science.

The national labs, for example, have tools and technologies that aren’t widely available at universities. For its part, MSU — as one of the nation’s leading research universities — is home to some of the world’s brightest undergraduate and graduate students, as well as postdoctoral scholars.

“The students and postdocs are incredibly excited, creative and motivated,” Hegg said. “Being part of a large center will also give them ability to get a breadth of knowledge, expand their capabilities and make connections.”

Both research settings boast leading scientists in a variety of disciplines, bringing an array of skill sets to the CCBC, such as enzymology, synthetic chemistry, computational modeling and structural biology.

“This team is a strong group of investigators with a track record of working productively together,” Kerfeld said. “The whole is much more than the sum of its parts.”

The natural processes and materials that the CCBC team is looking to mimic are found in what are known as bacterial microcompartments. Michigan State University’s Cheryl Kerfeld and her colleagues have been instrumental in revealing the form and function of bacterial microcompartments. Cover art for a 2019 issue of the journal ACS Synthetic Biology features some of their work, showing a rendering of the protein shell of a synthetic compartment. Reprinted with permission from ACS Synth. Biol. 2019, 8, 4. Copyright 2019 American Chemical Society.

Scientists first observed these tiny polyhedral capsules in bacteria more than 60 years ago. But it wasn’t until much more recently that they started to fully appreciate how important, versatile and ubiquitous the microcompartments are, thanks to researchers like Kerfeld.

Microcompartments are to bacteria what organelles are to human cells. The bacterial compartments house specific biochemical functions in an insulated environment, by means of protein shells that encapsulate enzymes.

Enzymes are biology’s catalysts. If chemistry were an assembly line, catalysts would be the different machines sequentially assembling parts into products.

By packaging enzymes into a compartment, bacteria can accumulate and concentrate reactants used by the catalysts, making biochemical reactions more efficient.

The compartments also offer protection to the encapsulated enzymes from compounds that would interfere with their operation. Compartments also can protect bacterial cells by keeping harmful intermediaries within their confines until they can be remediated.

“We’ve learned that this particular form of compartmentalization is really widespread among bacteria,” Kerfeld said. “What’s so promising is that different bacteria use essentially the same principles and building blocks to assemble architecturally similar shells but functionalize their interiors differently with a range of diverse enzymes. This suggests we can use this same basic building block set to construct prefab nanofactory shells and then customize their production by installing the catalytic machinery of our choice.”

“What I think is beautiful about the microcompartments is that they’re an example of modularity in nature,” said Danny Ducat, an associate professor of biochemistry and molecular biology at MSU and a CCBC researcher. He studies cyanobacteria, which are microbes that use microcompartments to help carry out one of life’s most important processes, photosynthesis. Each orb — one has been highlighted in lime green — is a bacterial microcompartment shell. These particular compartments are about 40 nanometers in diameter, or about one-thousandth of the diameter of a human hair. Credit: Kerfeld Lab/PNAS

“Over evolutionary time, bacteria have taken these shells and put in new enzymes to repurpose the chamber,” Ducat said. “We’re following on nature’s design principles and asking, ‘How can we put what we want in there?’”

At the CCBC, researchers will study how bacteria build these chambers, add enzymes by design and probe how the whole assembly works. Scientists can then use that knowledge to develop new approaches for reactions that will help sustainably manufacture fuels, fertilizers and other essential products.

To Kerfeld, this is simply a continuation of what humans have been doing since their earliest days: taking what nature gives us and repurposing it.

“Obvious examples are how humans first used stone and then trees — wood — for building houses,” she said. “The CCBC draws from the same impulse and ingenuity, though now we’re using biomaterials that are invisible to the naked eye and even engineering in components that are non-biological to build subcellular factories and also to operate these factories outside of cells.”

Building ultratiny factories is a big, multifaceted challenge and, to confront it, the CCBC has assembled a large team with diverse talents, seeded by existing collaborations.

“One of our strengths is that many of us have worked together before,” Kerfeld said. “There was already kind of a family with a common ethos here.”

For example, Kerfeld and Ducat are both core faculty members of the multidisciplinary MSU-DOE Plant Research Laboratory, as is Josh Vermaas, an assistant professor in the Department of Biochemistry and Molecular Biology.

National labs in the U.S. boast world-class facilities, like the Advanced Photon Source shown here at Argonne, and are home to cutting-edge technology and the experts who know how to use it. Credit: Argonne National Laboratory

Vermaas and his team will use their computational skills to simulate how molecules are transported into and out of microcompartments. Another computational research group at MSU, led by Professor Michael Feig, will be simulating how reactions play out at a molecular level within the crowded confines of a microcompartment.

“Some of these experiments are really difficult to do, but we can build simulations that really efficiently show us how things move around,” Vermaas said. “The modeling can be a cheaper and more effective way to get answers.”

Modeling and simulations also let researchers test their ideas before running experiments, helping experimentalists restrict their focus to the most promising approaches.

“I think it’ll really be a great example of how molecular simulations can bound what’s possible,” Vermaas said.

Also joining the MSU cohort of CCBC contributors are Michaela TerAvest, an associate professor of biochemistry and molecular biology; Robert Hausinger, a University Distinguished Professor in the Department of Microbiology and Molecular Genetics; and Markus Sutter, a specialist in the MSU-DOE Plant Research Laboratory and a scientist at Berkeley Lab. 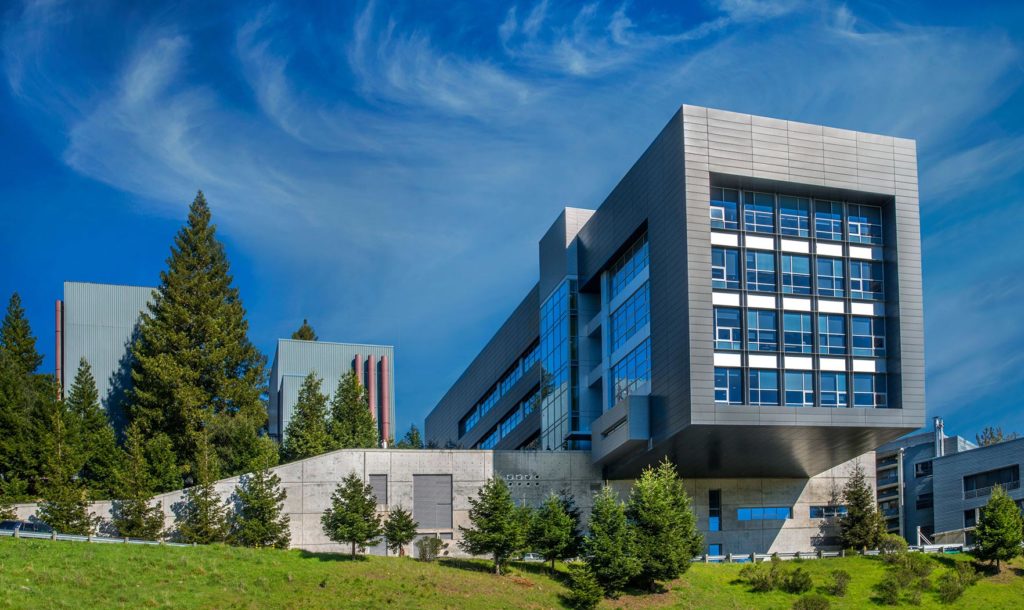 The Molecular Foundry at Berkeley Lab is one of the world’s premier nanoscience research centers. Credit: Lawrence Berkeley National Laboratory

The CCBC also extends beyond the boundaries of MSU’s campus, including members at Berkeley Lab and Argonne.

“Cheryl and I have been communicating about the physical aspects of bacterial microcompartments for years,” said Argonne’s Tiede. “It was just natural for us to work together on this because of our joint interest and complementary expertise.”

Tiede and his team are experts with Argonne’s state-of-the-art tools for characterizing physical and chemical properties of materials.

“One of the grand challenges in energy has been engineering materials that mimic nature,” Tiede said. “We can address this challenge by taking advantage of the unique capabilities of national labs. At the same time, by having multiple institutions and multiple investigators, we can create a more connected and much more creative environment.”

“National labs have scientists and engineers working together on both fundamental science and practical applications, and they’re home to large facilities,” said Berkeley Lab’s Ralston, who is also the director of the Biological Nanostructures Facility at the Molecular Foundry.

“Team this up with the academic scientists who tend to focus more on the underlying fundamental science, and you’ve got the perfect match of expertise and all the tools you need to make great science possible,” Ralston said.