Robin Lin Miller, MSU psychology professor, who is part of the MSU Consortium for Sexual and Gender Minority Health, got a front-seat view recently of the discrepancies in the way different countries are approaching the international monkeypox outbreak.

Miller, whose research focuses on effective community-based HIV prevention services and access to HIV care for LGBTQIA+ people, attended the International AIDS Conference in Montreal, where protests have broken out over the United States’ slow rollout of the Jynneos monkeypox vaccine. Montreal, in contrast, has been moving much faster and being more proactive than the U.S., she said.

“Within less than two weeks of their first case [health officials in Montreal] had reached out to all the community organizations that work with gay, bisexual and transgender populations where they suspect the possibility of cases to be high and to nightclubs and sex-on-premises venues. And they’ve managed to provide initial vaccinations to 15,000 people,” Miller said. “They’ve worked rapidly and in close partnership with groups on the ground and in non-stigmatizing ways.”

Miller was sitting near her colleague, blogger Mark King, who jumped up to begin filming the protests for his blog “My Fabulous Disease.” It was a clear sign to Miller just how furious many in the gay community are at the slow monkeypox response in the U.S.

“If you want to reach the people who are most vulnerable to monkeypox, you have got to activate those community networks right away,” she said. 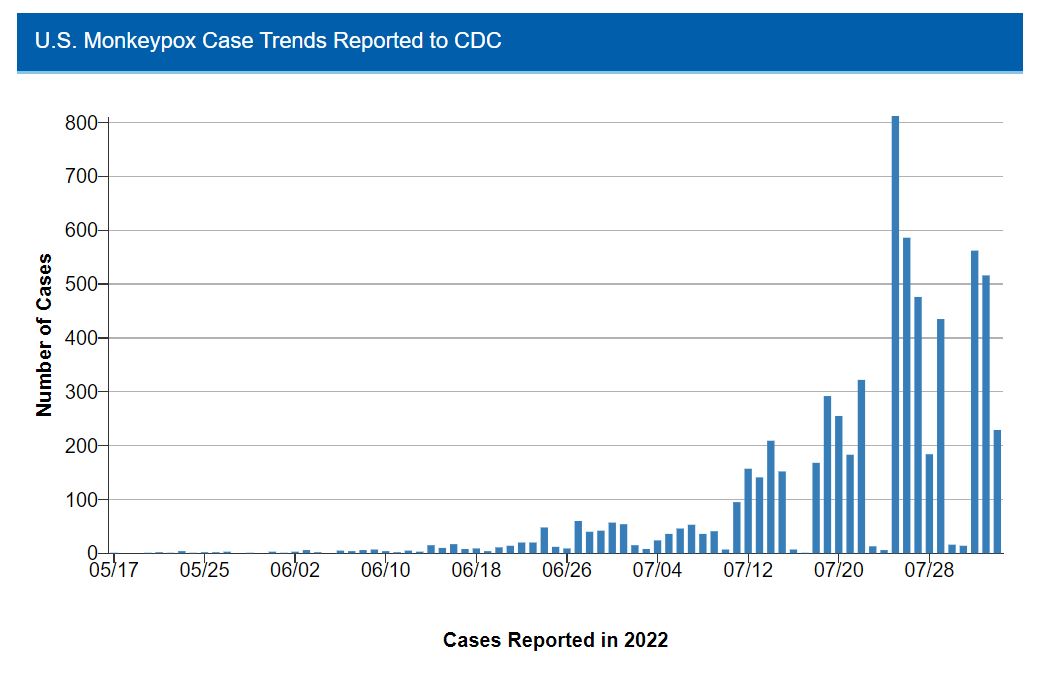 Canada has reported 890 confirmed cases as of Aug. 4. In contrast, the United States has seen more than 7,100 cases, according to the CDC. President Joe Biden declared monkeypox a national health emergency on Aug. 4. But because most of the cases in this country and elsewhere in the global north occur among gay, bisexual and other men who have sex with men, there are fears that they will be stigmatized as they have been throughout the global HIV/AIDS epidemic.

“One of the lessons we’ve learned from the HIV epidemic is that when we lose our conviction that health is a human right to which everyone is entitled, we are far less effective in our response than necessary to end epidemics. Anyone can get this in the general population, but simply because right now monkeypox is concentrated in a highly stigmatized group of people, there is a real danger of repeating the stigma we see in how we continue to respond to HIV and how we devalue the populations who bear the highest disease burden,” Miller said. “This impedes our ability to respond effectively.”

Monkeypox is rarely fatal but causes extremely painful sores and rashes with flu-like symptoms.  Although in endemic regions traditionally the disease was transmitted directly from animals to humans, mostly children, the current epidemic is spreading through direct person-to-person contact. While it is being seen primarily in gay, bisexual and other men who have sex with other men, it is not a sexually transmitted disease. All that transmission requires is prolonged, skin-to-skin contact, Miller said. The disease can be transmitted for roughly 8.5 days after exposure and before any symptoms appear, making contract tracing very difficult.

“For instance, if I had a monkeypox rash on my hands, and gave you a long back massage, I could transmit it to you that way,” she said. “You can get it from prolonged kissing. You can get it from sexual contact. What we are seeing now, the rashes on the tongue, genitals, and perineum, are simply the places on the body where there has been prolonged contact.” As of Aug. 2, Michigan has seen 66 cases, including four in Ingham County, according to the Michigan Department of Health and Human Services. Miller says the vaccination supply for the state is nowhere near what is needed.

“It’s not even close to adequate. It’s a two-dose regimen and we have something in the area of 7,000 doses for the whole state at the moment,” Miller said. “That number will change, of course, but even so, the global supply falls far short of current need.”

The two-shot Jynneos regimen is especially important to immune-compromised people such as those living with HIV. They are less well protected with only one dose. The Jynneos shot is also the only safe vaccine for children and those who are immune-compromised.

There is a lot of mistrust in the government and doubt that the U.S. health officials will get the vaccines to the people who need it most, Miller explained.

“There’s real concern about replicating the inequalities in distribution that we have seen in the past, whether we are referring to what happened with COVID or what continues to occur with access to HIV-related medications,” she said. “People have complained that the Jynneos vaccines are disproportionately going to highly affluent, white communities and people. Lack of distribution of vaccines to LGBTQIA+ black and brown communities is becoming a real issue.”

Globally, health officials are also concerned that wealthy global north countries are hoarding the vaccine while many countries – especially those in regions of Africa where monkeypox is endemic and principally affects children – have not been able to access adequate vaccine supplies for decades.

According to the CDC, there are steps vulnerable people can take to prevent exposure to monkeypox, including:

This article was originally posted on the College of Social Science website.