Back from the dead: Meet the frogs overcoming extinction

Researchers from MSU and Ecuador have confirmed that many harlequin frogs once believed to be extinct are, in fact, persisting

If there’s news about amphibians these days, odds are it’s not going to be good. A pathogenic fungus has been decimating populations around the world for about forty years and counting, pushing many species to extinction. And once a species is classified as extinct, odds are it isn’t coming back.

That’s why researchers have been stunned to see one genus — Atelopus or harlequin frogs — defying the odds. Now, new research from ecologists at Michigan State University and collaborators in Ecuador is setting the stage for an unprecedented underdog story — or, if you will, an underfrog story.

With a combination of literature review and fieldwork, the team has shown that as many as 32 harlequin frog species, once thought to be possibly extinct, are still surviving in the wild.

“I can’t tell you how special it is to hold something we never thought we’d see again,” said Kyle Jaynes, the lead author of the new study published in the journal Biological Conservation. Jaynes is an MSU doctoral student in the Department of Integrative Biology and the Ecology, Evolution and Behavior Program, or EEB.

The team’s work paints a much brighter picture for the future of these frogs and biodiversity in general. But the researchers also hope it creates a sense of urgency around conserving the rediscovered species, which are still critically endangered.

“We want people to walk away from this with a glimmer of hope that we can still address the problems of the biodiversity crisis,” said Jaynes, who works in the lab of Sarah Fitzpatrick, an assistant professor in the College of Natural Science who is based at the W.K. Kellogg Biological Station.

“But rediscovery does not equal recovery,” Jaynes said. “This story isn’t over for these frogs, and we’re not where we want to be in terms of conservation and protection. We still have a lot to learn and a lot to do.” The bright colors and patterns displayed by some harlequin frogs has helped establish them as cultural icons. Credit: Kyle Jaynes

Back from the brink

Since the 1980s, a fungus called Bd — short for Batrachochytrium dendrobatidis — has been killing off members of more than 500 species of amphibians, according to a recent estimate. It’s been characterized as an apocalypse.

The charismatic harlequin frog genus has been hit exceptionally hard. Over the past four decades, experts believed that upwards of 80% of its species were driven to extinction.

Around the turn of the 21st century, however, people started spotting species that had been missing, in some cases, for decades. Reports became more frequent as time went on, but these sightings were recorded as individual incidents.

In 2019, Jaynes won a grant from the National Geographic Society to, in part, bring those disparate reports together to provide a more complete account on the status of these frogs. Now, he, Fitzpatrick and their colleagues in Ecuador have done that.

Harlequin frogs are still threatened by the devastating impacts of a pathogenic fungus, but they are also a case study in persistence that could help improve protection and conservation efforts. Credit: Morley Read

“In total, 87 species have been missing,” Jaynes said. “To date, 32 of those once-missing species — that’s 37% — have been rediscovered over the last two decades. This is a shocking number.”

The grant also enabled the MSU researchers to travel to five different sites in Ecuador to look for rediscovered frogs across a range of habitats. When they’d find one, the team would then collect saliva samples for genetic studies (they also swabbed a frog’s skin to look at which microbes, including Bd, were living there).

“If you’ve ever done an ancestry test that uses your spit, that’s the idea,” Fitzpatrick said. “It’s like 23andMe for frogs.”

“We didn’t think these frogs existed a decade ago,” Jaynes said. “Now we have DNA samples. That information is invaluable.”

Through examining that DNA, the team found that species that had been missing and presumed extinct for longer had less genetic diversity than frogs that disappeared more recently. Low genetic diversity is an indicator that a species could be more susceptible to future stressors, from say, a new strain of Bd or climate change or habitat loss.

Information like this is required to develop strategies to conserve and protect rediscovered species, but the researchers will need to gather much more of it, Jaynes and Fitzpatrick said. Still, this study shows that information is out there and points to future avenues of inquiry.

“This study opens up a lot of other questions,” said Fitzpatrick, who is also a core faculty member of EEB.

“For example, why are these frogs persisting? What we found points to the fact that there probably isn’t a single explanation,” Fitzpatrick said. “And now that we’ve described these frogs, how do we ensure their recovery?”

The good news is the team isn’t starting from scratch. In fact, it already includes researchers who have been working on some of these questions for years. 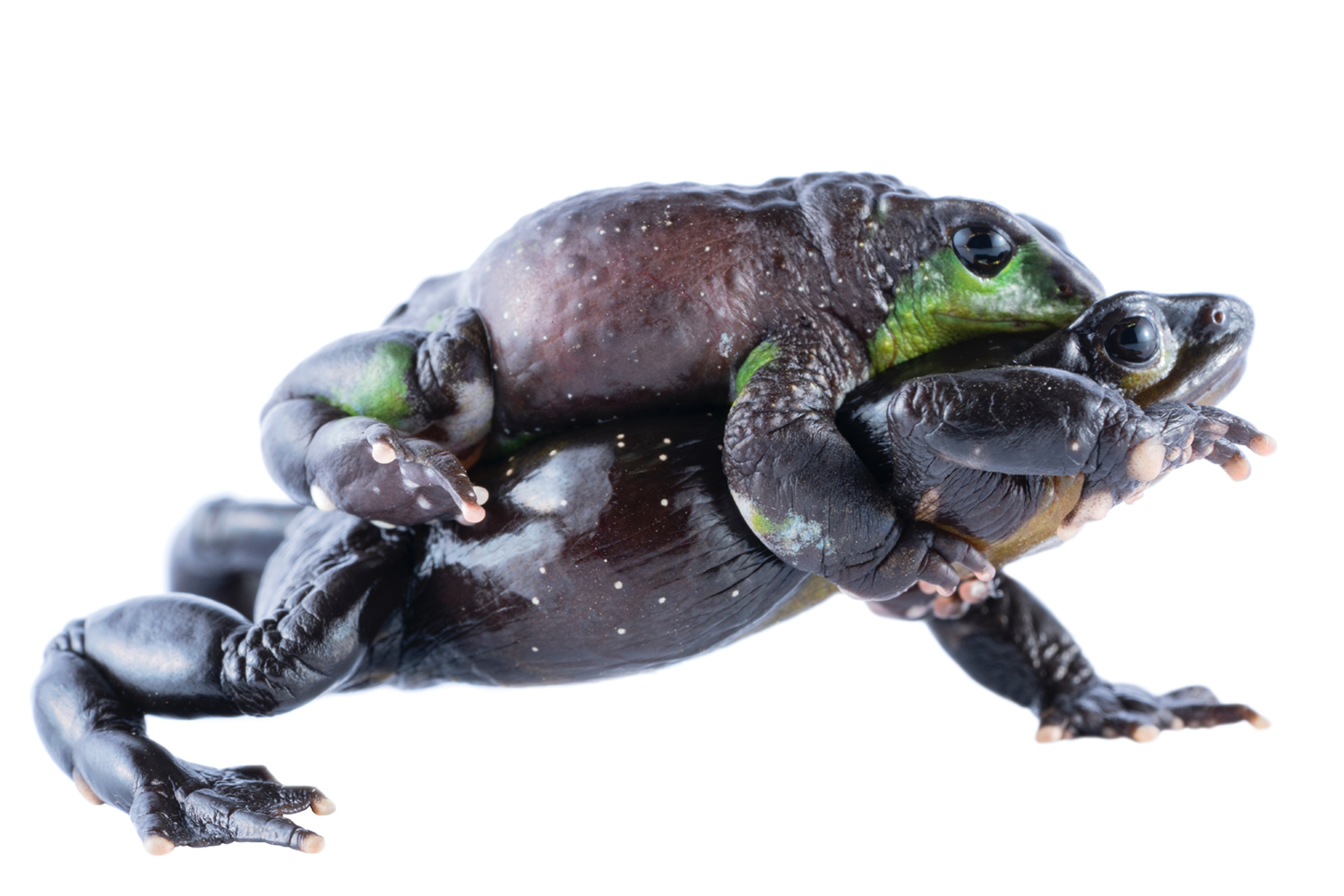 A pair of Atelopus nanay, which are critically endangered. Credit: Jaime Culebras

Jaynes and Fitzpatrick collaborated with six researchers from four different institutions in Ecuador for this study.

Other team leaders include Luis Coloma, a senior researcher with the Jambatu Center for the Investigation and Conservation of Amphibians and a finalist for the 2023 Indianapolis Prize, the world’s leading animal conservation award.

He’s been interested in these frogs since he was a child and now works at a center that’s helping breed disappearing species with the goal of eventually reintroducing them into the wild. He’s also part of the Jambato Alliance that formed to better protect rediscovered species in the wild, which was recently highlighted on Twitter by Leonardo DiCaprio. A cohort of the research team at the Amaru Zoológico Bioparque in Ecuador. Pictured, from left to right, are Sarah Fitzpatrick, David Salazar-Valenzuela, Kyle Jaynes, Mónica Páez-Vacas and Fausto Siavichay. Credit: Ernesto Arbeláez

“We really want people to understand how important our partnerships are. We were invited into this work by our Ecuadorian colleagues,” Fitzpatrick said. “They’ve been working tirelessly on these challenges for decades. There are so many things that they bring to this work that make it possible.”

Invaluable contributions have also come from outside the realm of professional research and conservation. The team works with local communities in Ecuador — including Indigenous communities — that treasure the frogs at least as much as the researchers do.

For example, one of the challenges in accurately classifying a species as rediscovered or returned from extinction was proving it was lost in the first place. For some species, like the starry night harlequin frog that researchers thought was extinct, addressing that challenge was a matter of knowing who to talk to.

“It was only missing to scientists,” Jaynes said. “It was never missing to Indigenous people. They were protecting it.”

“These frogs are gems. It’s not just nerdy scientists who think they are important,” Fitzpatrick said. “They’re culturally iconic. There’s a city in Ecuador named after one of the species.” Another example of how local communities helped this work is also one of the earliest. The Jambato harlequin frog was once remarkable for how common it was in Ecuador and across the Andes mountain range. In fact, Jambato translates to frog or toad.

People would see these frogs routinely in their yards and, after a rain, covering roadways. That was until the late 1980s, when the amphibians rapidly disappeared in a matter of a couple years.

It wasn’t until 2016 that a 12-year-old boy spotted one in an alfalfa field in his village. According to the Jambato Alliance, he wouldn’t have thought anything of the sighting had it not been for a local pastor offering a reward for finding such a creature. Not long after, the rediscovery was confirmed.

In 2019, when Jaynes and Fitzpatrick had the chance to visit Ecuador, that village was one of the sites they had the opportunity to visit with their colleagues.

“It was very dramatic,” Fitzpatrick said. “We were all spanned out across this field, but nobody thought we were going to see this frog. Then one of our collaborators started shouting in Spanish, ‘I found one!’”

It was a dramatic moment, and the project has been an emotional journey, the researchers said.

Nature isn’t known for giving second chances, but that’s what it’s providing now with dozens of rediscovered species. And Spartan researchers will be part of the team dedicated to making sure these animals don’t disappear again.