Jiliang Tang of Michigan State University presented the 2022 J.K. Aggarwal Prize Lecture, hosted by the International Association of Pattern Recognition this summer in Montréal, Québec. The recipient is a scientist under the age of 40, whose contributions and research have had a major impact on the field. 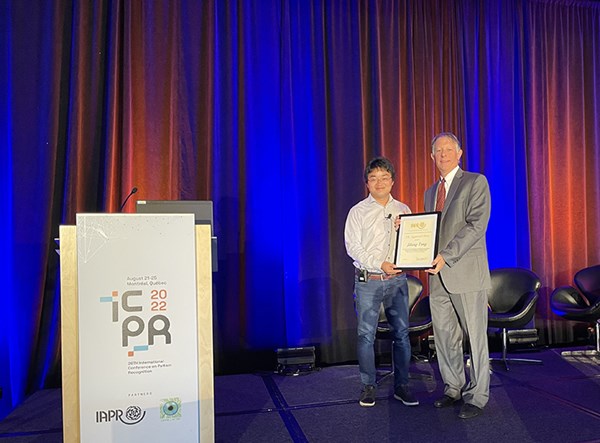 Tang is a newly appointed MSU Foundation Professor of Computer Science and Engineering, who has won multiple recognitions in recent years for his work in data mining and machine learning.

“I was very honored to be selected for this international honor,” Tang said. “I was able to introduce a novel perspective to understand and unify existing Graph Neural Networks. They have shown their power in graph representation learning, especially in biology and healthcare. We talked about ways to build trustworthy GNNs, which is important because graphs now denote data in real-world systems,” he added.

Abdol Esfahanian, professor and chair of the Department of Computer Science and Engineering, called Tang one of the College of Engineering’s youngest rising stars.

“He burst through the academic levels — from assistant professor to associate, full and now the select MSU Foundation Professor title — in just three years. Jiliang is a phenomenal researcher — and is internationally respected as judged by the series of top awards he has received so early in his career.”

For the full story, visit egr.msu.edu.