New theoretical research from FRIB could help answer looming questions about the ghost-like neutrino particle, including its mass and whether it is its own antiparticle

Heiko Hergert grew up on a dairy farm in Germany discussing history with his father while they worked. Back then, he never guessed he’d be one day helping solve mysteries of the universe at the Facility for Rare Isotope Beams, or FRIB, at Michigan State University.

“I had good grades in high school and people told me, ‘Maybe you should go to college,’” said Hergert, who is an associate professor of physics at FRIB and in MSU’s Department of Physics and Astronomy.

Enrolling in college would be his first step toward becoming the first member of his family to pursue a career in academia — which the FRIB and MSU faculty member said he couldn’t have done without support from relatives, friends and teachers. But he didn’t know it would launch his career trajectory at the time. And there was still the small matter of picking which subject to study.

Hergert shared his father’s love of history, but he also liked math and science and thought he’d find better career options if he pursued that path. Along the way, he was drawn to using math to answer some of the most fundamental questions in physics.

“I recognized that I was good at math and theoretical physics. And I was enjoying it,” said Hergert, who became the first in his family to earn a doctorate. “It becomes self-reinforcing. You realize, ‘I can actually make a contribution.’ Then you want to keep making them.”

Hergert published his latest contribution on Dec. 10, 2021, in the journal Physical Review Letters, working with Roland Wirth and Jiangming Yao, who were postdoctoral researchers at FRIB. 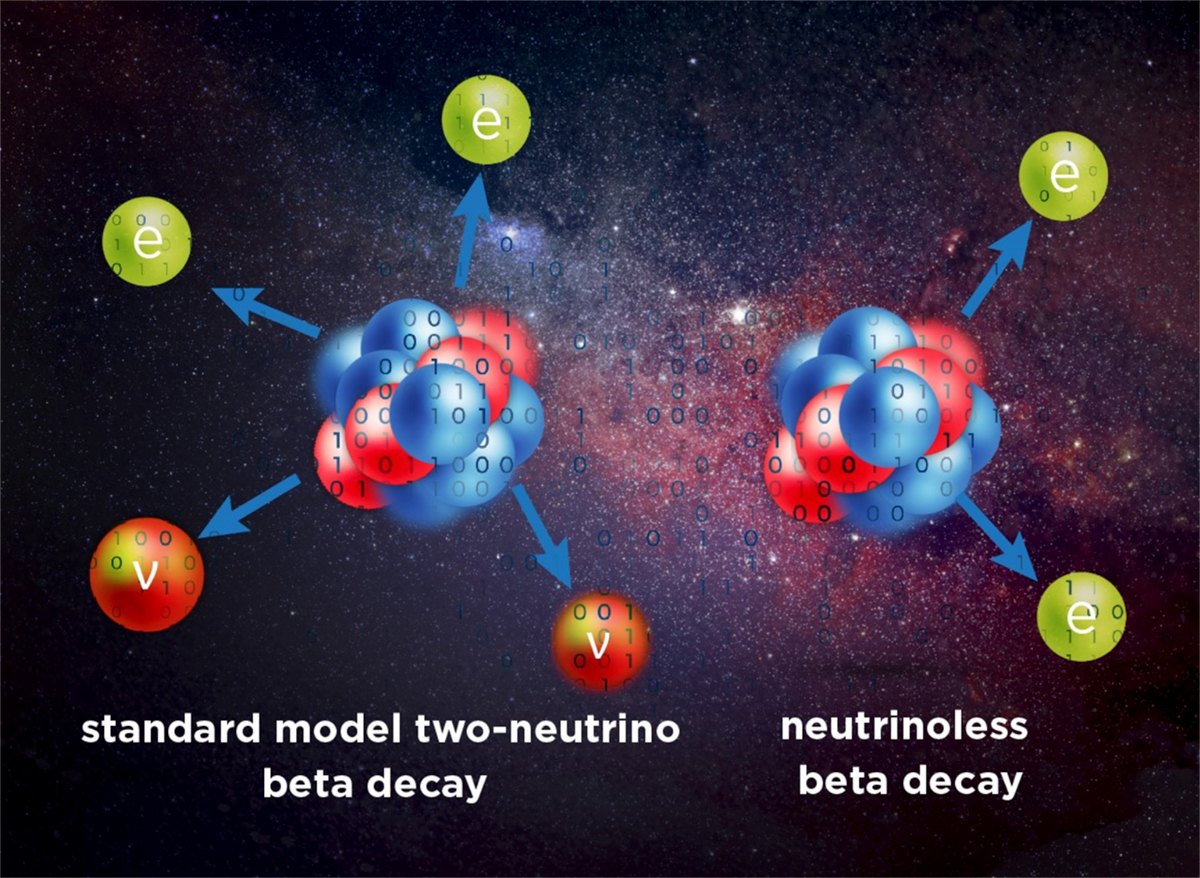 New theoretical research from FRIB could help answer looming questions about the ghost-like neutrino particle, including its mass and whether it is its own antiparticle. (Credit: Facility for Rare Isotope Beams)

The team refined calculations for a theoretical way that certain atoms can decay, or fall apart, and the results suggest that scientists have a better likelihood of observing this decay than previously thought.

“To compute specific parameters for this supposed rare decay, we need to have consistent ingredients in our theory,” Hergert said. “Our work is a more consistent calculation, and this added consistency leads to an increased probability in detecting the decay.”

That is, if this process does actually happen in nature.

This so-called neutrinoless double beta decay, has never been observed. But scientists are already designing experiments to detect it because, if it does occur, it could reveal intimate information about one of the most ubiquitous and mysterious particles known to science: the neutrino.

Neutrinos are the second most common particle in the universe, behind only photons, which are particles of light. But, unlike light, neutrinos don’t glow, reflect from mirrors or interact very much with anything at all, which is why some people refer to them as ghost particles.

In fact, about 100 trillion neutrinos zip through our bodies undetected every second. And if our bodies could actually detect neutrinos, it would take 100 years to sense one.

Despite this wispy existence, neutrinos are an integral part of the Standard Model of particle physics. This can be thought of as humanity’s best effort to explain some of the most fundamental physics in the universe.

Yet, even with the Standard Model, large questions linger about the nature of neutrinos, like how massive they are. There’s also a possibility that neutrinos are their own antiparticles, which is the name given to the fundamental particles that make up antimatter.

Antimatter is far less abundant in the universe than “regular” matter — the stuff that makes up the things we see and touch every day. Matter and antimatter can also annihilate each other if they come in contact (why, yes, that is the technical term).

Antiparticles can be thought of as “opposites” or partners to the fundamental particles that make regular, everyday matter. For example, the negatively charged electrons found in regular matter have positively charged antiparticles called positrons. Neutrinos are uncharged, but they have other properties that would be inverted in an antineutrino. Or not, if the Standard Model is missing something and a neutrino is its own antiparticle.

Detecting neutrinoless double beta decay would provide scientists with a new approach to solve mysteries about the neutrino’s mass, its antiparticle’s identity and more.

“The actual detection wouldn’t happen at FRIB, but scientists at FRIB are strongly involved in the effort to measure and accurately model the nuclear structure of the likely detection materials,” Hergert said.

The detection experiment itself will likely require a large, likely international project that’s buried deep underground to shield it from unwanted background effects. That may sound a little farfetched to those outside the fields of nuclear or particle physics, but precedents do exist. Take, for instance, the IceCube Neutrino Observatory, a collaboration of more than 40 institutions, including MSU, from 12 countries that’s using a cubic kilometer of Antarctica’s ice to help detect and study neutrinos.

Researchers have also already built demonstration-scale versions of the detector needed to sniff out the neutrinoless double beta decay, Hergert said, but it may take a decade or two to build the full-size detector and collect the necessary data.

In the meantime, there are still contributions for Hergert and his colleagues to make, further reinforcing his choice to take on some of the biggest questions in physics.

“Nuclei are ripe with opportunities to test our fundamental understanding of nature, and now that FRIB is launching, we will have a powerful tool at our disposal that can help us find answers to these questions,” he said. “It’s an extremely exciting time.”

Michigan State University (MSU) operates the Facility for Rare Isotope Beams (FRIB) as a user facility for the U.S. Department of Energy Office of Science (DOE-SC), supporting the mission of the DOE-SC Office of Nuclear Physics. The establishment of FRIB was funded by DOE-SC, MSU, and the state of Michigan, and user facility operation is supported by the DOE-SC Office of Nuclear Physics.