Getting data to do more for biodiversity

Michigan State University ecologists have developed a mathematical framework that could help monitor and preserve biodiversity without breaking the bank. 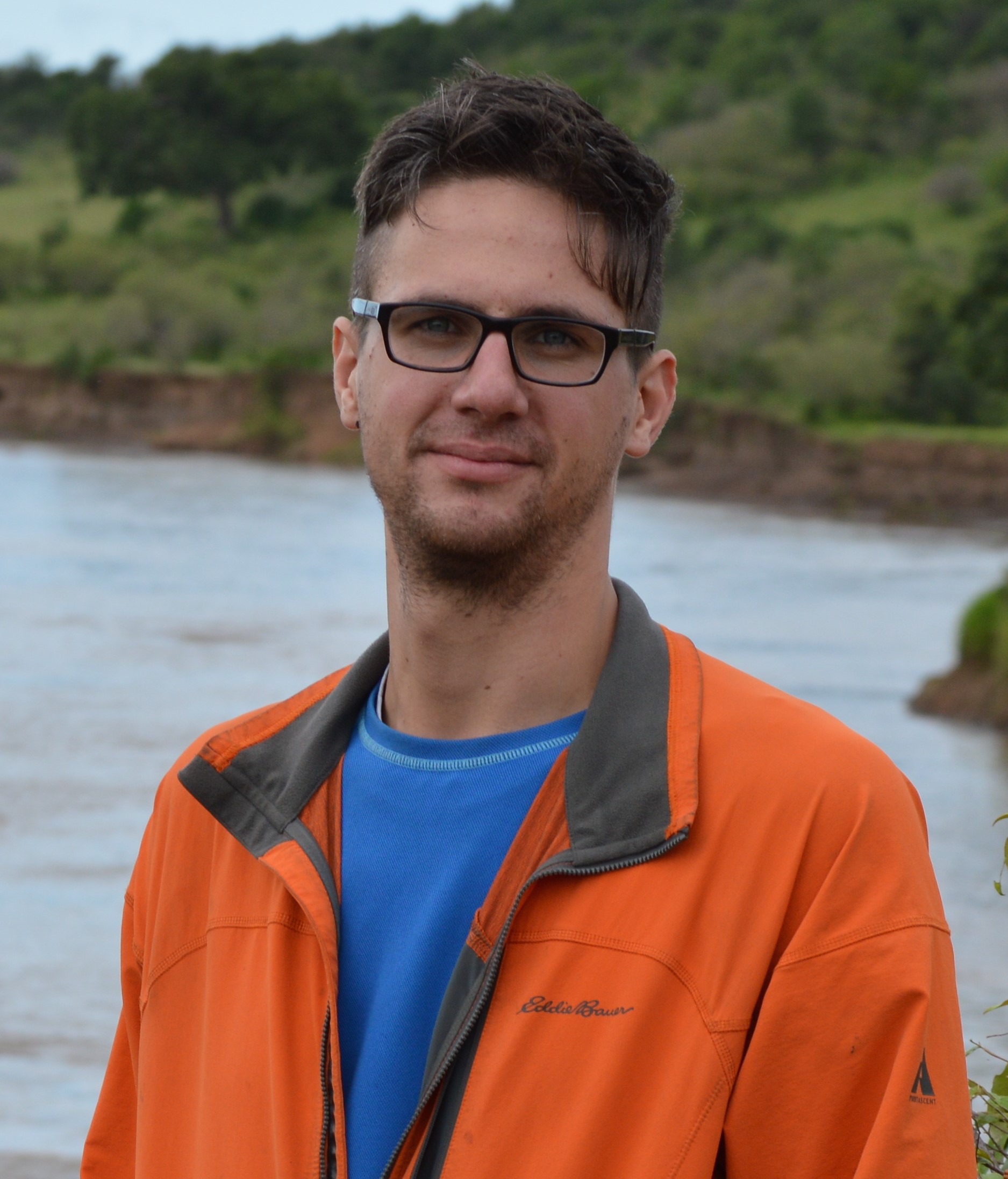 Matthew Farr, who helped develop the model as a doctoral student at MSU

This framework or model takes low-cost data about relatively abundant species in a community and uses it to generate valuable insights on their harder-to-find neighbors. The journal Conservation Biology published the research as an Early View article on Aug. 25.

“One of the biggest challenges in monitoring biodiversity is that the species you’re most concerned about tend to be lowest in abundance or they’re the hardest species to observe during data collection,” said Matthew Farr, the lead author on the new report. “This model can be really helpful for those rare and elusive species.”

Farr, now a postdoctoral researcher at the University of Washington, helped develop the model as a doctoral student in Elise Zipkin’s Quantitative Ecology Lab in the College of Natural Science at MSU. 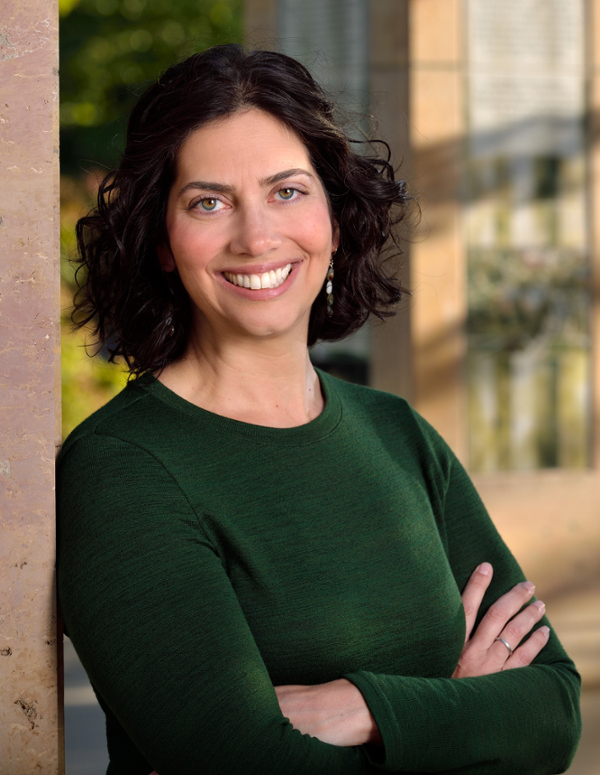 “There are a lot of species in the world and many of them are data deficient,” said Zipkin, an associate professor of integrative biology and director of MSU’s Ecology, Evolution and Behavior Program, or EEB. “We’re developing approaches to more quickly estimate what’s going on with biodiversity, which species are in trouble and where, spatially, do we need to focus our conservation efforts.”

After validating the model with an assist from forest-dwelling antelope in Africa, the researchers say it could be applied to a variety of other animals that meet certain criteria.

“The model doesn’t work for all types of species. It’s not a panacea,” Zipkin said. “But when it does work for a community, we can learn a lot more about member species without much data.”

The ‘magic’ of the model

For its newest model, Zipkin’s team focused on what’s called detection-nondetection data that tracks whether or not a given animal is detected in a given habitat, which typically only allows for estimation of species occurrence or distribution patterns.

“It’s basically the cheapest data and the easiest to collect,” Zipkin said. “You go to a spot, wait and see what animals are there and only need to record which species are seen.” 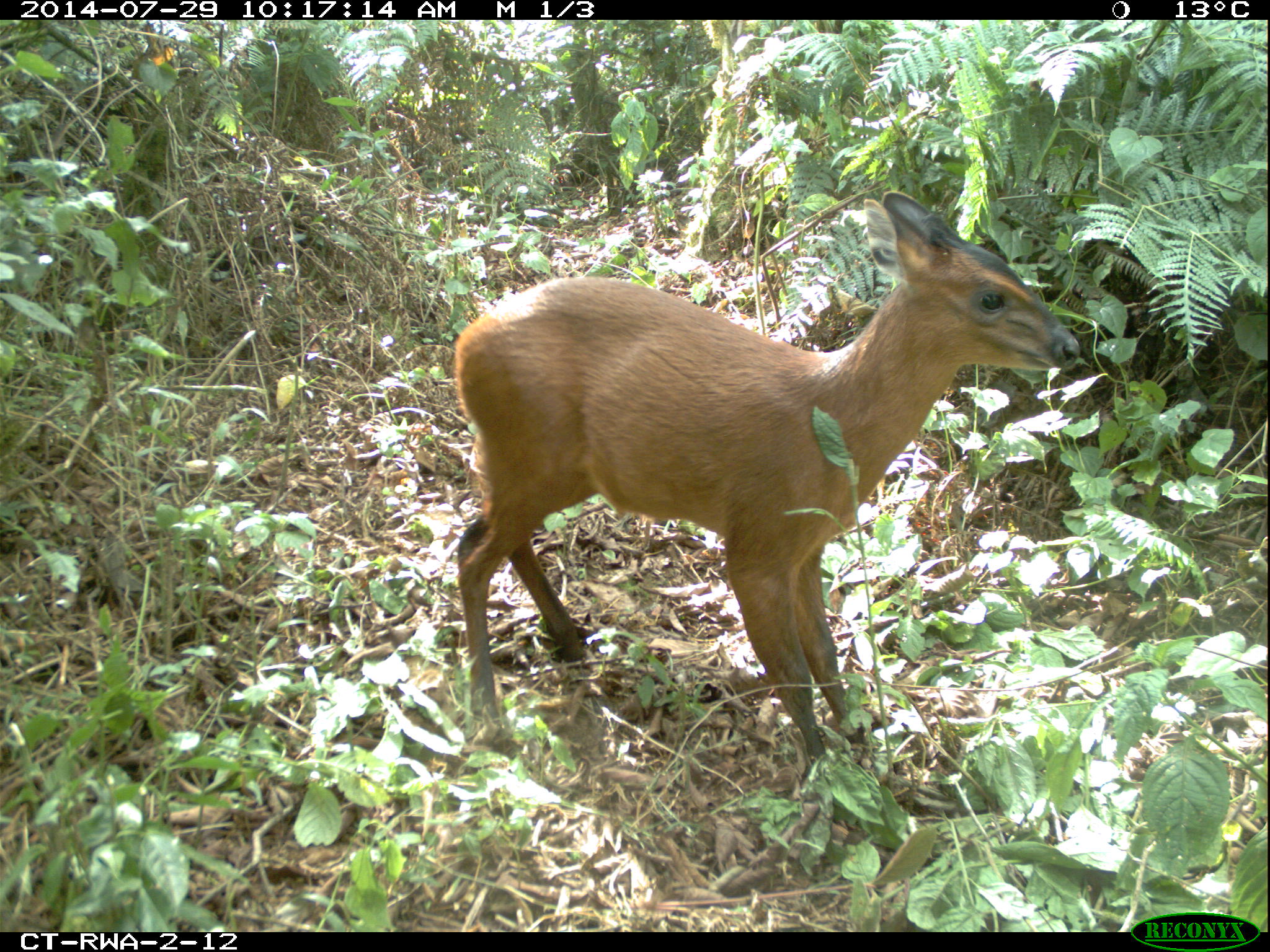 A black-fronted duiker is captured by a camera trap. Credit: Timothy O’Brien

Researchers gather this data visually in person or with low-cost, motion-detecting camera traps that snap photos when triggered by an animal. Researchers then analyze the photos to record detection-nondetection data over time.

There are trade-offs, though. Although relatively cheap and easy to collect, detection-nondetection data doesn’t provide as much information as researchers and conservationists want. Historically, that has required intensive observational approaches such as tagging and tracking animals.

“Intensive tracking lets us calculate all sorts of things about animals and their communities, but those data are expensive and hard to get,” Zipkin said. “For certain species, it’s impossible.”

The MSU team realized that, for the right animals, they could use an understanding of animal behavior and statistics to close the information gap by squeezing more insight out of detection-nondetection data.

“For some species, these are the best data you can get,” Farr said. “Now we can get more out of it. Our model allows for estimation of abundance trends, reproduction rates and species survival probabilities — all using only detection-nondetection data.”

That may sound like magic — some of Zipkin’s colleagues have even said so — but there’s nothing supernatural about the model. Like much of science, it’s the result of hard work, collaboration and building on previous efforts in the field.

The story of the new model has its roots in 2003 with researchers J. Andrew Royle and James D. Nichols. The duo devised a mathematical link between the abundance of a species and the probability of detecting it.

At the time, Royle was a researcher with the U.S. Fish and Wildlife Service and Nichols was with the U.S. Geological Survey. Both are MSU alumni: Royle graduated with his bachelor’s degree in 1990 and Nichols earned his doctorate in 1976.

“It’s interesting,” said Farr, whose current adviser, Sarah Converse, also graduated with a bachelor’s degree from Michigan State before becoming an associate professor at the University of Washington. “Wherever you go in this field, people have some connection to Michigan State.” 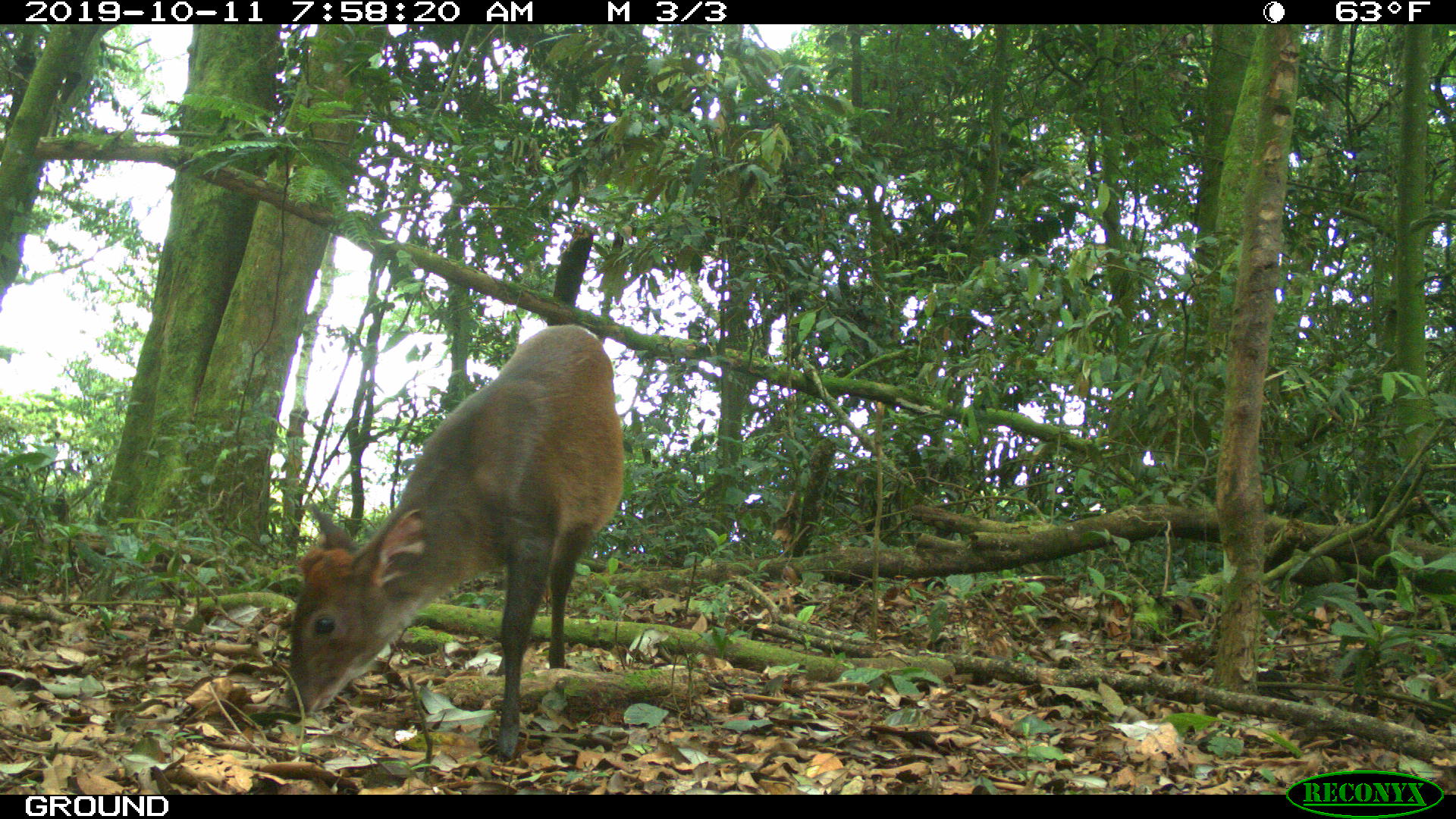 Working in Zipkin’s lab with support from the National Science Foundation, Farr took the next step by linking the population dynamics of different species within the same communities.

“The model lets information from more common species inform what’s happening with the rare and elusive species,” said Farr. “The model relies on the commonalities between species, but still allows for variations.”

To develop the model, the team had to make some assumptions, like that the target species were territorial and did not travel much. The researchers then had to find real species that fit those assumptions to validate their model.

“We knew it would work for certain types of communities, but did those communities exist in real life?” Zipkin said.

“That’s one of the biggest challenges in model development,” Farr said. “You develop the model in a vacuum with simulations running under perfect conditions. You need to show what it can do in a real-world situation.”

“That’s when Tim O’Brien reached out and said, ‘I have your animals,’” Zipkin said. Timothy O’Brien, now retired, was an ecologist with the Wildlife Conservation Society

Timothy O’Brien is a retired ecologist in Kenya who worked with the Wildlife Conservation Society, a nongovernmental organization or NGO, and an expert in camera traps. As part of what’s known as the Tropical Ecology Assessment and Monitoring program, or TEAM, he’s helped standardize how camera traps are used to make their data as powerful as possible.

He was familiar with Zipkin’s 2016 work and learned that she was expanding the model to include multiple species over multiple seasons. He suspected that forest-dwelling antelopes, notably those known as duiker, would provide the perfect test case.

Not only did duiker behavior match the assumptions of the model, but O’Brien had been helping monitor the animals for years using camera traps. Duikers presented an interesting and important conservation case.

“The duiker that live in rainforests, they are the most sought-after bushmeat in Africa,” O’Brien said. “If duiker populations are in decline, it’s usually because of people hunting for bushmeat.”

Bushmeat is meat from any wild animal and it’s an important source of food and income for many communities. But the hunting is loosely regulated and is financially incentivized by markets that sell bushmeat. The combination can be devastating for duiker populations.

With MSU’s model and TEAM’s duiker data, the team assessed the population dynamics of a total of 12 antelope species — some more abundant than others — in six national parks in Africa, where duikers are protected. The data covered time periods ranging from four to 11 years.

“We didn’t see the level of population decline in duiker you expect to see when hunting is an issue,” O’Brien said. “I would say the parks are fulfilling their function as far as duiker are concerned.” 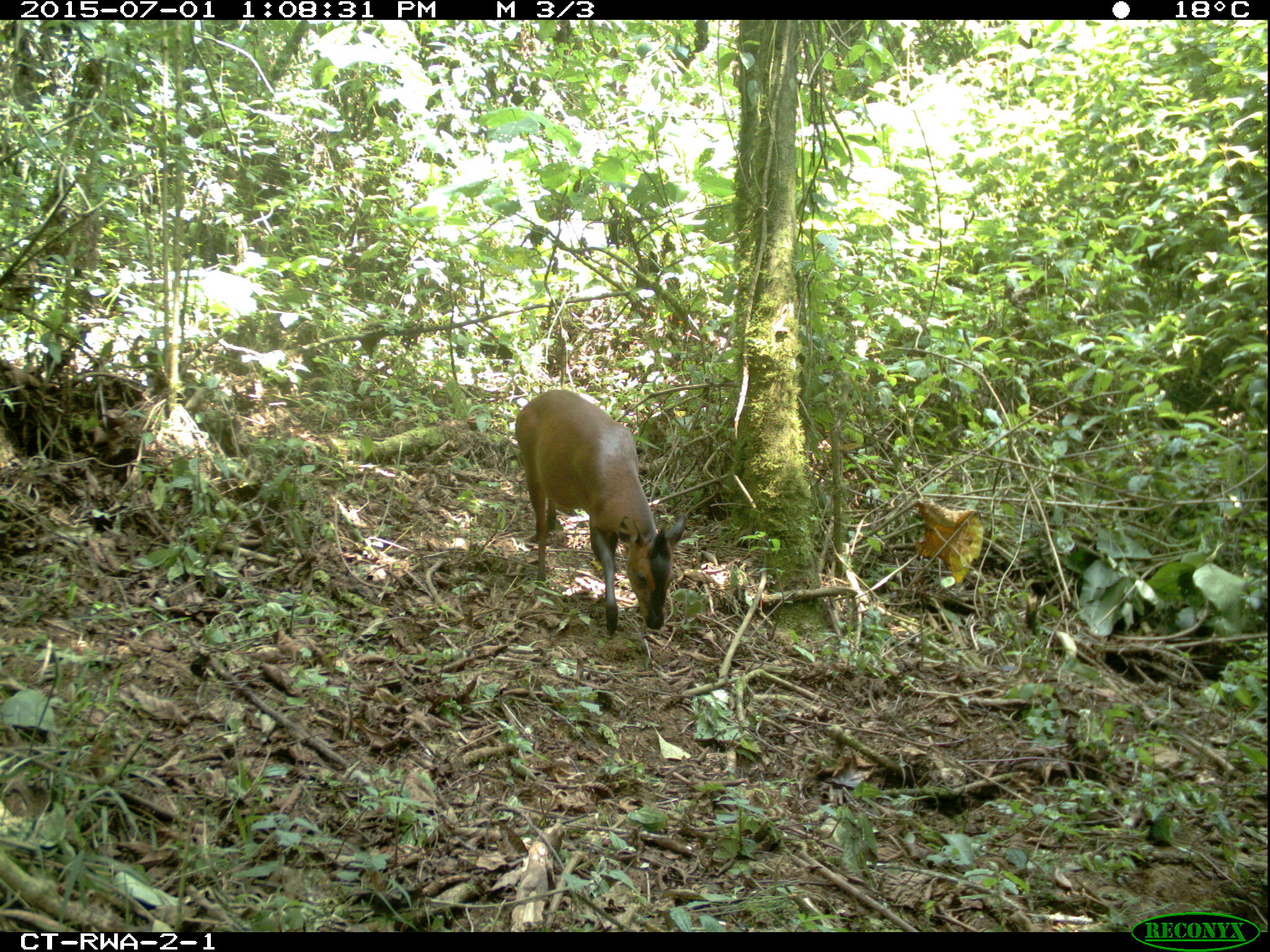 Black-fronted duikers, like the one seen here, were observed in national parks in Uganda, Rwanda and the Republic of Congo. Credit: Timothy O’Brien

“We found that’s what causing the changes was more the differences between the parks than between the species,” Zipkin said. “We haven’t pinpointed the exact causes yet, but our results could help us do that.”

“Matt and Elise have taken this model to a whole new plane,” O’Brien said. “I’ve really enjoyed the collaboration.”

Charles Yackulic, a research statistician with the USGS, was also a contributor to the project, which was supported by NSF, WCS, Conservation International, the Smithsonian Institution and the Gordon and Betty Moore Foundation.

“This project is a great example of a university, government and NGOs working together,” Zipkin said.