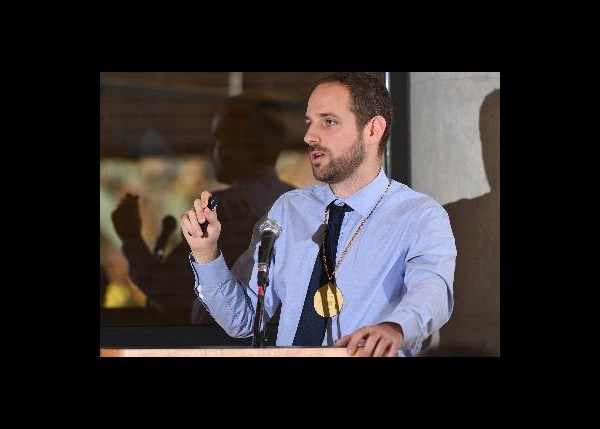 Greer, a leading young figure in the field of algebraic geometry, studies enumerative algebraic geometry, modular forms and Hodge theory. He received his Ph.D. from Stanford in 2017 and held distinguished postdoctoral positions at the Simons Center for Geometry and Physics at Stony Brook and at the Institute for Advanced Study in Princeton, New Jersey. He joined MSU’s mathematics department in August 2021.

Dan Van Haften, who received B.S. and M.S. degrees in mathematics from MSU in 1970, established the endowed professorship in honor of his parents, the late James and Esther Van Haften, who set a lifelong example of support for learning.

“This endowed professorship, which Dan has so generously endowed, aims to support ‘deductive literacy’ in the modern world, bringing awareness of logical thinking to many disciplines,” said Jeffrey Schenker, chair of the MSU Department of Mathematics. “François is an excellent mathematician and a well-rounded professor. This professorship allows us to recruit a really excellent person and provide them with some acknowledgement, some extra resources at the beginning of their career where they can develop that into something very successful.”

Greer’s work in cutting-edge fields has already been published in some of the top journals in mathematics. He is an engaged teacher, has directed an undergraduate research group and co-organized the math department colloquium in 2021-2022.