As the nation honors the sacrifices of the veterans who have fought for its freedoms and made the ultimate sacrifice, Michigan State University is honoring the legacy of one Spartan veteran in particular for his lasting impact on campus.

World War I veteran Cosmer Magnus Leveaux served in the U.S. Army as Corporal, Battery A, 1st Battalion, 119th Field Artillery, 32nd Division. Leveaux was a student in forestry and part of the class of 1918. He enlisted in the Army on May 10, 1917, and was killed in battle in France on Aug. 10, 1918.

Leveaux’s name appears on a freestanding brass plaque commemorating him in West Circle near Cowles House on MSU’s campus. However, it wasn’t until recently that MSU multimedia coordinator Derrick Turner noticed Leveaux’s name was misspelled on the plaque and the date of his death was incorrect.

Turner made the discovery through his own passion for both photography and history and took his curiosity to the internet where several sources, including MSU Archives and Historical Collections, confirmed the inaccuracy. He then informed Dan Bollman, vice president for Infrastructure Planning and Facilities, and Steve Troost, campus planner, about the error.

So, on May 18, after coordinating with the Campus Archaeology Program, the Alumni Office and Leveaux’s family over the past year, MSU fixed its error and properly honored Leveaux and his sacrifices during a private ceremony with some of Leveaux’s family members. There, the university dedicated a new plaque in Leveaux’s honor and with his correct information. The original plaque was turned over to Leveaux’s family. 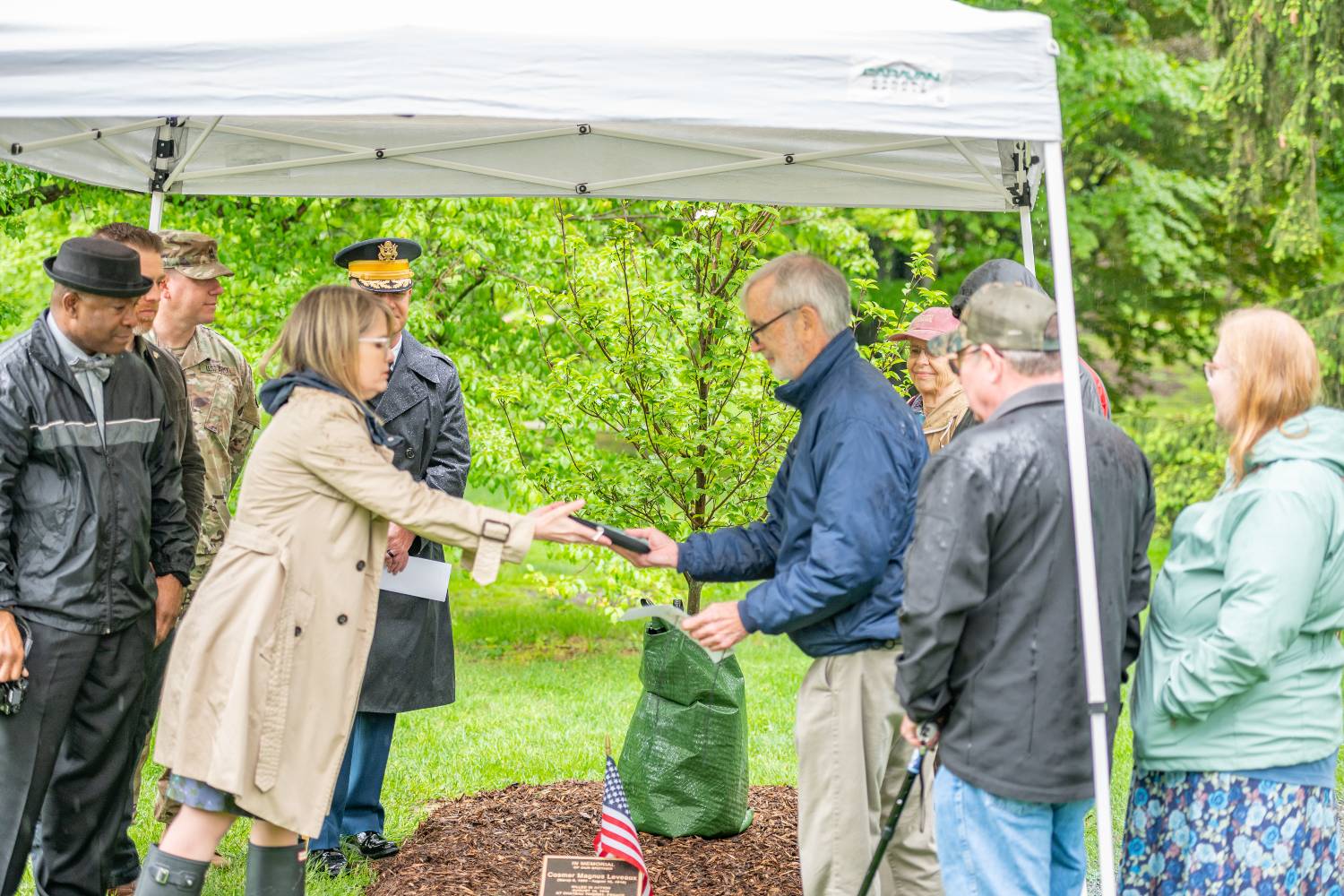 “Memorial Day is a time to reflect and honor the brave heroes who have sacrificed their lives for our country and our freedoms,” said MSU President Samuel L. Stanley Jr., M.D. “It is an honor to rededicate this plaque in memory of Corporal Leveaux and pay tribute to the life of a remarkable Spartan.”

“We have been amazed at the attention given to this single veteran who gave the ultimate sacrifice 104 years ago,” said John LesVeaux. “It speaks volumes of the dedication of MSU that all of the sacrifices of our veterans shall not be forgotten. 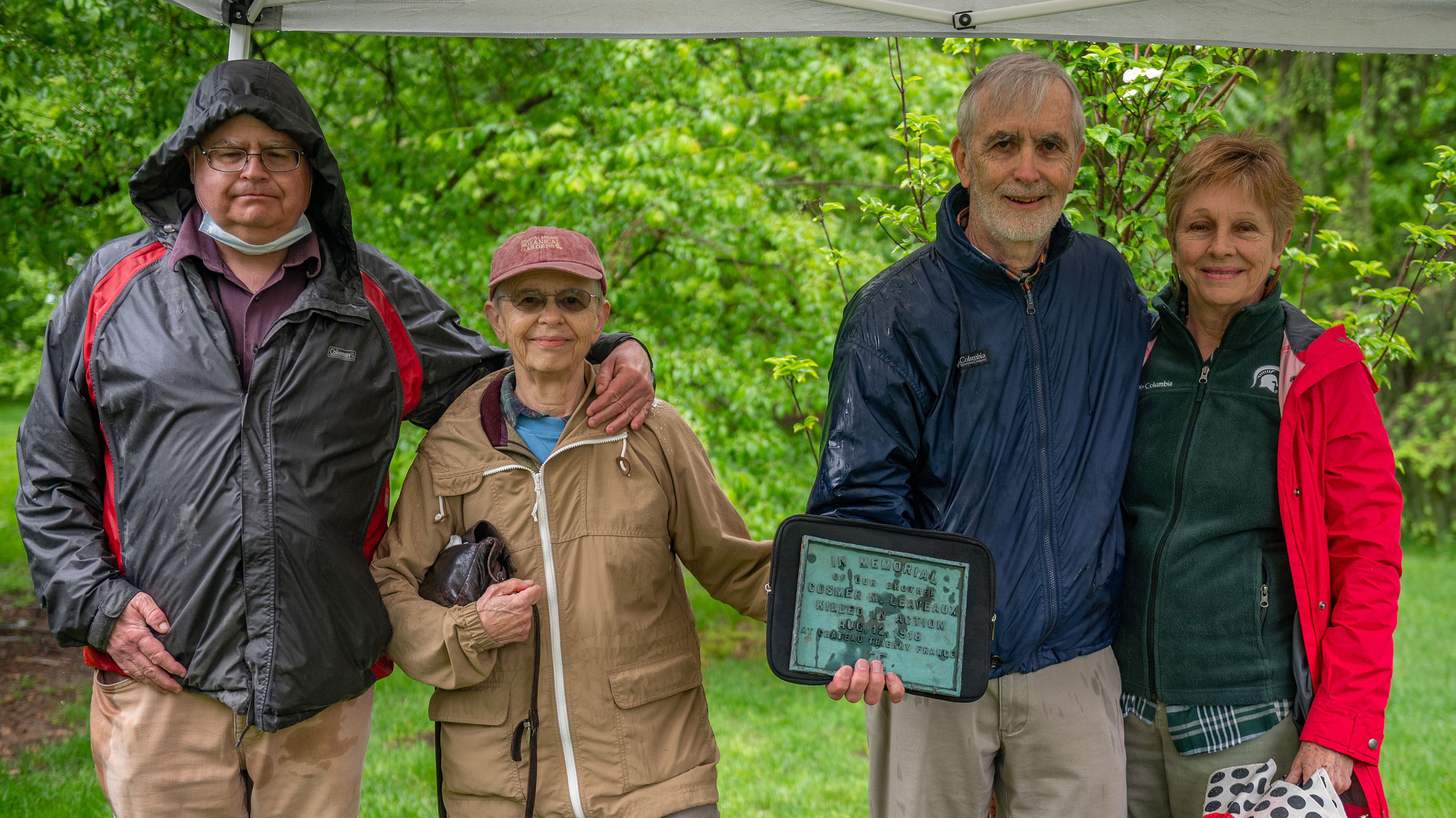 “I am sure that if Cosmer were here with us today, he would be equally as amazed and gratified as we are at this tribute to his sacrifice. We thank MSU for its efforts.”

Leveaux began his work for the U.S. Forest Service as a forest guard in the Superior National Forest in Ely, Minnesota, in May 1916. After an almost four-month stint, Leveaux decided to leave his job and continue his education. During his time at MSU, then named Michigan Agricultural College, Leveaux was actively involved in the international honors forestry society, Xi Sigma Pi. He was also active in the AE Theon, a local social fraternity established in 1915 that is no longer active on campus.

Leveaux’s name also is inscribed on a plaque inside the Memorial Grove of the Great War in West Circle on campus, which commemorates 33 soldiers who lost their lives during WWI. The plaque originally was dedicated on the college’s commencement day in June 1919.

For Turner’s part, he said he was glad to play a role in helping to accurately recognize Leveaux.

“It’s an honor to be university photographer, where the entire campus is my office,” Turner said. “Helping to preserve our campus for future Spartans to enjoy is good stewardship of our beloved campus and community.

“All of the people involved with correcting and reproducing the plaque shows Spartans care about everyone in the Spartan family — even those who lived over 100 years ago. It’s the ultimate demonstration of Spartans Will.”

By: Mark Bullion and Liam Boylan-Pett