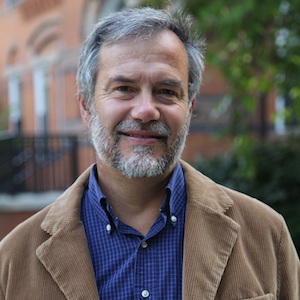 David Stowe, professor of religious studies in MSU's College of Arts and Letters.

In American culture, Christmas is supposed to be synonymous with joy. The familiar carols proclaim this message, with “Joy to the World” resounding in thousands of churches, while its secular counterpart exhorts listeners to have “A Holly Jolly Christmas.”

The real emotions of the season are a bit more complex. For many people, late December produces a kind of toxic brew of nostalgia and melancholy. It’s difficult not to remember loved ones missing from the holidays. People move, grow apart, pass on – all these hit home with a special poignance at this time of year, and other kinds of changes, too. Parents might even remember with nostalgic sadness a more innocent time when their children still believed in Santa. Nearly everyone has too much to do, and gift-giving can be a minefield.

I’ve been writing about the role that music plays in social life for most of my career as a religion scholar. And each November, when Christmas music starts its multi-week marathon, I’m especially sensitive to the songs that go off script – the songs that recognize how the “most wonderful time of the year” can actually feel far from it.

Elvis Presley captured some of this sentiment in his song “Blue Christmas,” which tells a tale of romantic separation: “I’ll have a blue Christmas without you/ I’ll be so blue just thinking about you.” Romantic holiday heartbreak is even more explicit in 1980s pop group Wham!‘s “Last Christmas”: “Last Christmas I gave you my heart/ But the very next day you gave it away.”

Sometimes called Longest Night services, this tradition is partly inspired by the winter solstice – the longest night of the year. It’s also a reminder that seasonal affective disorder might have something to do with people’s melancholy. It’s no wonder that Romans, pagans and others around the world celebrated the winter solstice with bonfires. Today, many people light small paper lanterns called luminaria, a custom that developed in the southern U.S. borderlands.

In fact, the four weeks of Advent, the period of the church calendar leading up to Christmas, have a kind of somber quality that is at least as important to the season than the festive 12 days of Christmas. “The tyranny of relentless mandatory celebration leaves us exhausted and often, ironically, feeling emptier,” Anglican priest Tish Harrison Warren wrote in a 2019 column for The New York Times. “To practice Advent is to lean into an almost cosmic ache: our deep, wordless desire for things to be made right and the incompleteness we find in the meantime.”

Churches often emphasize the sense of mystery and confusion leading up to the birth of the child Christ. Probably the best known Advent song is “O Come, O Come, Emmanuel,” whose mournful, chantlike melody goes back to 15th-century France.

The opening verse refers to the inhabitants of ancient Jerusalem, conquered by Babylon and mourning in “lonely exile” there. Awaiting a messiah or “Immanuel,” meaning “God with us,” predicted by the prophet Isaiah, they yearn for him to “disperse the gloomy clouds of night/ And death’s dark shadows put to flight.”

From war to the White House

Beyond church doors, a very different song that captures the bittersweet quality of the holidays is Vince Guaraldi’s “Christmas Time is Here,” with its moody jazz harmonies and waltz-feel behind an angelic-sounding children’s choir. It’s the opening song of the classic “Peanuts” animated TV special that begins, fittingly, with a depressed Charlie Brown going to Lucy for therapy.

But “I’ll Be Home for Christmas” might convey the atmosphere of nostalgia and melancholy better than any other. Recorded in October 1943, almost exactly halfway through World War II, the song became a hit for iconic crooner Bing Crosby, just as his “White Christmas” had the year before.

“I’ll be home for Christmas,” he sings in his rich baritone, describing snow and mistletoe he’s hoping for – before listeners realize he may be home “only in my dreams.”

Crosby’s version, with its unique little warble on the final syllable of “I’ll be home for Christ—ma-a-as,” is probably the best known – popularity due, in part, to how it captured the feelings of a world at war. Two decades later, astronauts Frank Borman and Frank Lovell requested the song be piped up to them as they returned to Earth aboard the Gemini 7 spacecraft.

Ironically, the BBC banned the song during World War II because of fear it might lower morale, saying it had “adopted a policy of excluding sickly sentimentality which, particularly when sung by certain vocalists, can become nauseating and not at all in keeping with what we feel to be the need of the public in this country.”

The most recent cover version is by the Cuban-American singer and songwriter Camila Cabello. In a performance last year at the White House, she brought in a mariachi band, giving her rendition a distinctly Mexican sound. She also makes a slight modification to account for today’s more abundant gift-giving, switching in “presents under the tree” instead of “presents on the tree.”

My favorite is Frank Sinatra’s 1957 rendition, with his usual cooler-than-cool sense of nonchalance – you get an impression that he’s really not in much of a hurry to get home to celebrate, after all. Which may be how many of us feel, at least part of the time, at this season of the year.

The above commentary is from an article written for The Conversation.