Lake sturgeon are the oldest living fish species in the Great Lakes, first appearing in the fossil record about 135 million years ago. These fish are sentinels for the health of a river, and to the Anishinaabe and Menominee native American communities, lake sturgeon carry great spiritual significance. For two decades, the  Black River Sturgeon Stream Side Research Facility in Onaway, Michigan, in partnership with Michigan State University and the Michigan Department of Natural Resources, has been dedicated to restoring this threatened species.

An interactive 360 degree tour of the Black River Research Facility hatchery.
In 1997, the population of lake sturgeon in Black Lake in northern lower Michigan had decreased by 66%, and researchers estimated 566 adult lake sturgeon remained. This triggered a statewide effort to restore lake sturgeon to the lake that has continued for 20 years. Today 1,189 lake sturgeon call Black Lake home.

“This is one of the largest populations of lake sturgeon in the state.” - Kim Scribner

Hatching a plan for sturgeon recovery

At the Black River Research Facility’s hatchery, lake sturgeon are bred and raised naturally through the egg, larvae and juvenile stages, then released back into the river. 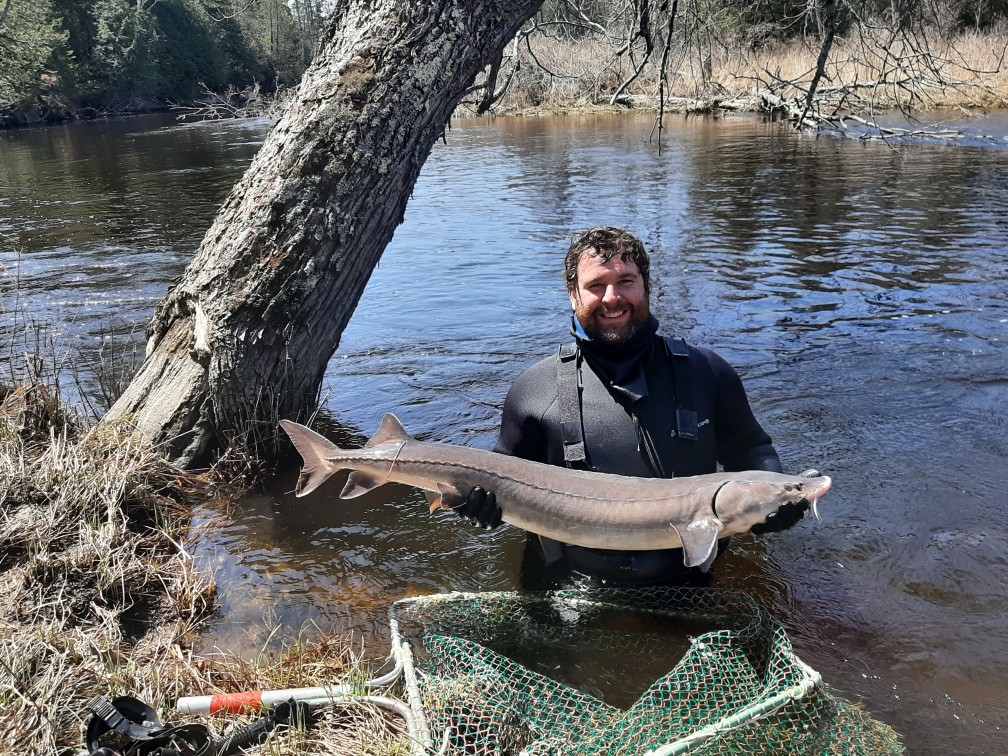 "The building opened in 2009 and represents a 20-year partnership between MSU, Michigan DNR, the Black Lake chapter of Sturgeon for Tomorrow (an outreach effort) and the Tower-Kleber Limited Partnership,” says Doug Larson, a research assistant at the Black River research facility. “The hatchery is unique because it is a stationary streamside rearing facility focused only on lake sturgeon.”

Being located adjacent to the Black River means that the larvae produced in the river and raised in the hatchery are anthropogenically isolated, meaning there is limited immigration and emigration of sturgeon fish from other locations. A lake sturgeon fish could spend its entire life — up to 100 years — in the Black Lake system.

“We can do research that few others can,” Larson says. “The fish produced in the hatchery are representative of the successes and failures of natural spawning pairings in the wild.”

The 20 years of research also provides a long-term data set that is missing from most restoration research studies.

“The technology we use to study lake sturgeon has increased tremendously in several different areas,” Scribner says. “How we track fish with tags is similar to what you’d put in your pet.” 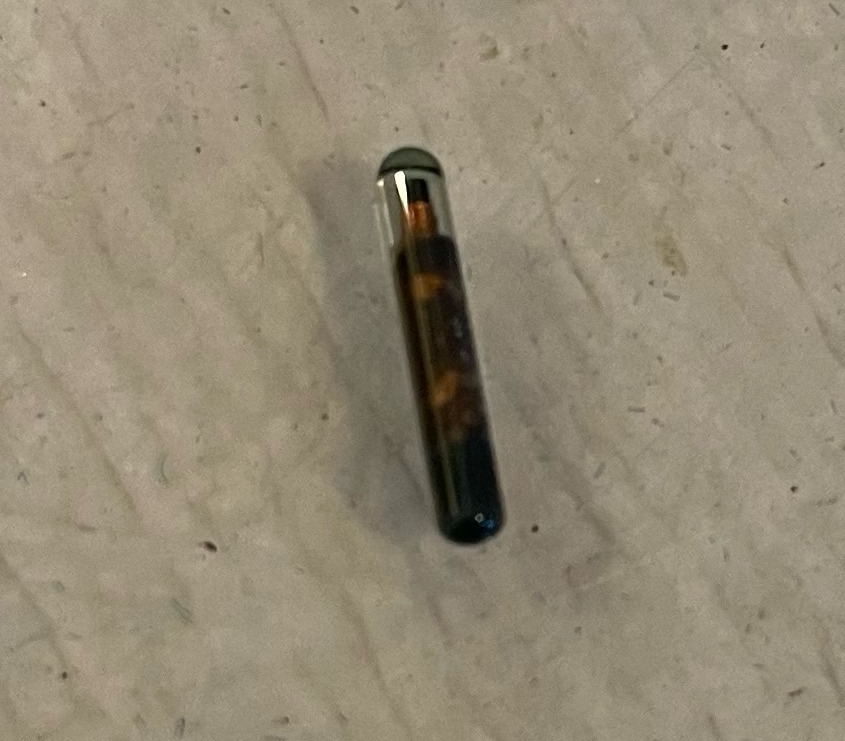 Almost all of the 1,189 lake sturgeon in the Black River have been tagged with a passive integrated transponder, or PIT tag, inserted into the fish. PIT tags allow researchers to track individual fish and record biological information such as the fish’s weight, length, location and date of spawning. Researchers can also track their movement within the Black River system without a researcher ever having to touch the fish. Antennae arrays at the mouth of the Black River and along the riverbanks pick up the signals emitted from the PIT tags and record them.

MSU has been a leader in using DNA technology to look at the diets of lake sturgeon predators.

"We want to know if the predators are eating sturgeon or other things like insects because there isn’t enough sturgeon?” Scribner says. “We also monitor conditions like if there is a new moon with lots of light that can impact the number of sturgeons eaten. This has helped us gain tremendous insight into sturgeon predators.”

Researchers at the Black River facility are internationally known for their genetics research where they can look at the genetic makeup of the lake sturgeon that successfully spawned  — at least once every three to four years —  compared to fish that haven’t spawned. Thanks to the PIT tag technology, the researchers know which males most likely fertilized the females’ eggs. This means they can analyze the genetic data of the parents before lake sturgeon larvae grow into juveniles.

Like humans, sturgeon need time to grow up before they become parents. It takes male lake sturgeon approximately 15 years and females about 25 years before they are mature enough to spawn, which provides a large gap of time where the fish are vulnerable to predators and poachers.

“Lake sturgeon are uniquely susceptible to over-harvest and habitat loss,” Larson says. “We have developed outreach and volunteer programs to protect the fish.”

Hooking communities with outreach and education Holding lake sturgeon juveniles from the Black River hatchery before releasing them into the Flint River as part of the Saginaw Bay sturgeon restoration effort. Image courtesy of Michigan Sea Grant

“Local groups like the Sturgeon for Tomorrow have developed the sturgeon watch program where hundreds of volunteers learn about lake sturgeon biology and guard the river during spawning to prevent poaching,” Scribner says. “It’s been a tremendously successful program.”

“Sturgeon are a charismatic fish that hook educators and youth, as well as their parents and communities, on being excited about the rearing of fish, which is part of the stocking program,” says Brandon Schroeder, a senior extension educator with Michigan Sea Grant, a program dedicated to the protection and sustainable use of the Great Lakes and coastal resources. “It also is a good way for us to have that conversation about human interactions with the environment, both the negative and the positive.”

Another community science program aimed at K-12 students is the Sturgeon in the Classroom program, where students help raise a lake sturgeon in an aquarium in their classroom during the school year and then return it to the hatchery or release it into a local river sturgeon call home.

“When these kids realize they are going to be adults before these fish are is really an ‘ah-ha’ moment for them,” says Meaghan Gass, an extension educator with Michigan Sea Grant. “They want to protect the fish so that they can be around for a long time.”

“When these kids realize they are going to be adults before these fish are is really an ‘ah-ha’ moment for them.” - Meaghan Gass As part of the Sturgeon Community Science Pilot from 2021, students get an up-close look at lake sturgeon habitat and learn how to conduct scientific research. First, the students learn all about lake sturgeon and are trained to identify other fish living in the Black River. This helps researchers better understand potential sturgeon predators or prey in the river system. Later, the students watch a video of the mouth of the river and are instructed to count the number of fish they can identify. Sometimes the students see more than one fish and sometimes they don’t see any.

“Together the Sturgeon for Tomorrow, Sturgeon in the Classroom and the Sturgeon Community Science pilot programs engage the local community and youth in the early life stages of this long conservation story through science and research, hatcheries, rearing and stocking juvenile fish,” Schroeder says. “This enhances population numbers as part of the ‘ecosystem’ and contributes to education efforts surrounding sturgeon restoration.”

The Black River facility hatchery is open for public tours. “We use this opportunity to educate anyone who passes through on the research we’ve done and provide an opportunity to get up close with a ‘living fossil,’” Larson says. “We generally see up to 1,000 visitors per year.”

Even though lake sturgeon have been around for such a long time, there is still so much to be learned about them. “The Black River research facility has been restoring the sturgeon population and providing a better understanding of sturgeon, which is important to protect and restore this species, and it creates a big ripple effect,” Gass says. “Anything we can do to connect people to their local area — helping them see their role in stewardship conservation — is so valuable for protecting Michigan and Great Lakes natural resources.”

By: Emilie Lorditch and Deon Foster