There’s a popular saying that people who ignore history are doomed to repeat it. It turns out that there’s another reason not to ignore history according to new research from Michigan State University published in the journal Ecology.

When it comes to restoring ecosystems to their natural state, people can’t ignore history if they want to repeat successful efforts. “Restoration is somewhat notorious for giving you different outcomes for very similar approaches,” said Chris Catano, a research associate in the Department of Plant Biology at MSU and first author of the new report. “There’s a lot of variability.”

Catano works with Lars Brudvig, a professor in the College of Natural Science. One of the Brudvig Lab’s projects is illuminating the fundamental factors that contribute to that variability. With support from the National Science Foundation, this new study focuses on one of those factors — when a plot is restored — through the lens of biodiversity.

“What we’re seeing is that the past matters. History matters,” Catano said.

Working at a site that was once an active airstrip, the team restored 18 plots to prairie. The researchers kept all the restoration conditions as identical as possible except for when the restoration started.

They then tracked how different communities of organisms came together in those plots — for example, which species of plants grew and what other organisms they attracted. Beyond characterizing biodiversity, the team also analyzed how it affects the downstream ecological functions of a plot.

“This has been a huge question in ecology for nearly 30 years now, understanding what are the consequences of biodiversity for the ways an ecosystem functions,” said Brudvig, who is also a core faculty member of the Ecology, Evolution and Behavior Program, or EEB, at MSU. 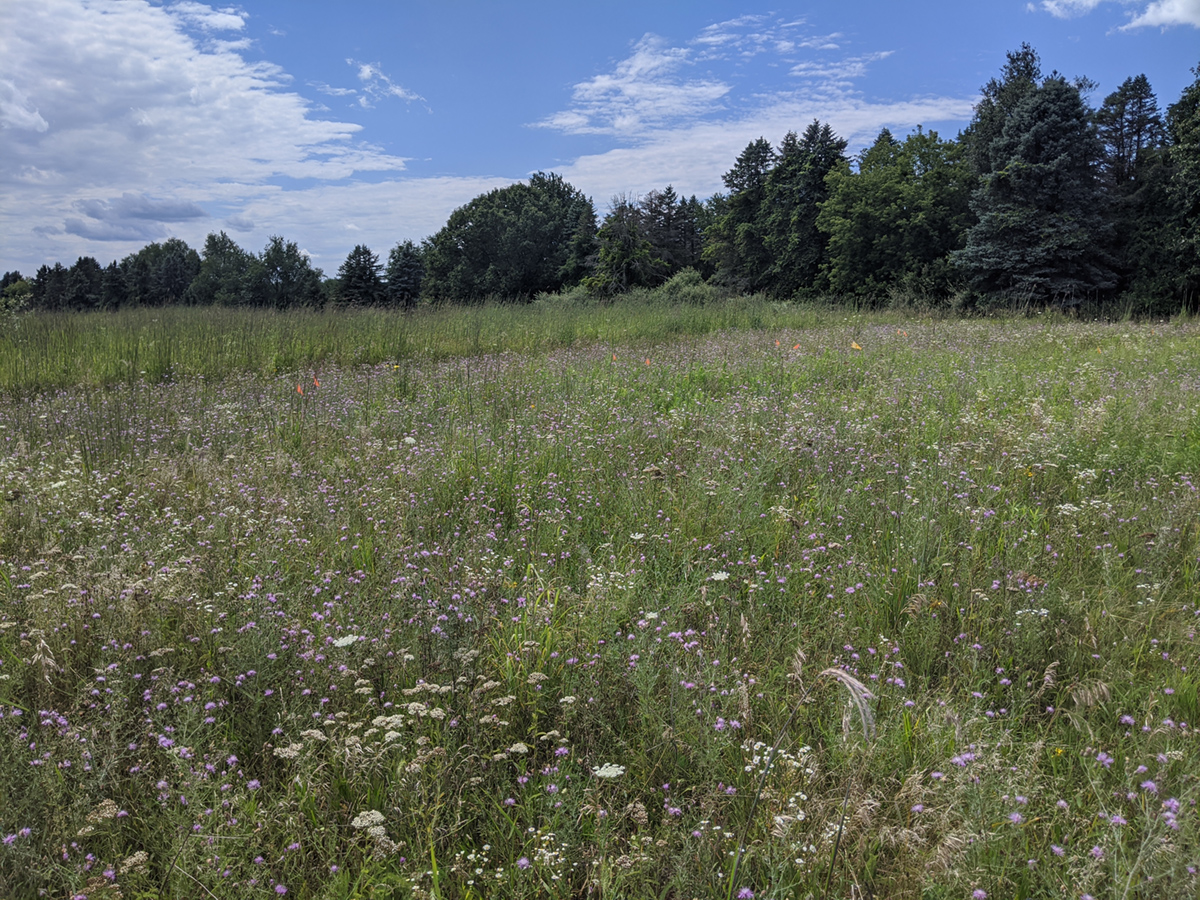 The experimental site Arbor Luxe Reserve let the MSU team investigate how planting year affected the trajectory of restored prairie. Native big bluestem grass is visible in the back, standing taller than the purple flowers of spotted knapweed in the front, which is native to Europe and generally considered invasive in North America. Credit: Lars Brudvig

There is a lot of evidence supporting a positive relationship between biodiversity and ecosystem function, but many of those studies were carried out in highly controlled environments, the team said. With its unique site, designed specifically to examine the effects of history, the team observed that the relationship is more complex in a more natural setting.

“We saw relationships that ranged from positive to neutral to negative,” Brudvig said. “In nature, the results are a huge mixed bag.”

Brudvig stressed that this work doesn’t discount the previous results or negate the conclusion that, generally speaking, more biodiversity is a good thing. In individual cases, however, Brudvig’s team is showing that the impact of biodiversity is nuanced and complicated — it can’t be summed up in a single value or measured quantity.

“There isn’t a number for biodiversity that tells you the whole story,” Catano said. “In this case, it was the identity of key species and their traits, which are hidden behind numbers, that really matter for how the ecosystems function.”

The MSU team showed how those variables are connected to the history of a site, which was made possible through effort, expertise and a gift from a neurosurgeon with a passion for flying.

It’s not that ecologists didn’t know that history could affect the outcome of restoration work. They’ve had suspicions that planting seeds after a particularly wet or dry season, for instance, could affect the trajectory of the prairie that would sprout, Catano said.

What’s been missing is data from real-world settings that are still controlled enough to extract meaningful conclusions, Catano said. Another missing piece has been a theoretical component that can explain how history matters and how much it matters.

“It’s challenging because some of the theories aren’t always grounded in reality,” Catano said. “And then applications don’t always have the fundamental theories they need to be useful.” Catano saw an opportunity to help resolve that disconnect with a set of plots Brudvig and a former doctoral student, Anna (Groves) Funk, established almost a decade ago at the Lux Arbor Reserve. Funk, who earned her doctorate in 2018, is also an author on the paper.

The reserve is part of the W.K. Kellogg Biological Station, or KBS, which is MSU’s largest off-campus education complex and one of North America’s premier inland field stations. A neurosurgeon named Richard Light gifted the reserve to KBS in 1991.

Light was also an amateur pilot, and the gifted land included a kilometer-long airstrip. It’s since been reclaimed by nature — mostly by weeds and invasive species — but it still provided a one-of-a-kind opportunity to Brudvig and his team.

“It’s incredibly level and it had incredibly uniform vegetation. It is a great place to do an ecology study,” Brudvig said. “Anna and I started dreaming this up in 2013, and we’ve been curating it since then. It’s taken cooperation across campus to keep it running.”

Mark Manuszak, the site manager at Lux Arbor, has been particularly instrumental in implementing and maintaining the experiment, which officially launched in 2014.

From 2014 to 2016, Funk began restoring six plots each year to prairie, with the only difference between the plots being the year she seeded them.

“People on the ground are full of anecdotes like, ‘Because there was a drought this year, our restoration turned out differently.’ But there are lots of other potential explanations,” Brudvig said. “Anna set up a really nice experiment that controlled for all of these confounding variables.”

“This site is super valuable since it has those multiple plantings in one place,” said Funk, who is now a freelance science writer and editor. “It let us ask so many questions about what happens year after year.”

By design, the site allowed the team to characterize not only how biodiversity was impacted by planting year, but also the consequences of those differences.

“I was pleasantly surprised when Chris’s analyses revealed such important effects,” Funk said. “We already knew that conditions in the planting year had a big impact on species, but it’s even cooler to see how those species changes, in turn, affected ecosystem functions.”

There's no place quite like Michigan State University's W.K. Kellogg Biological Station. Watch this 2017 video to learn more about this premier site for field research.

‘Small, scraggly and not good at doing a whole lot’

There’s almost an intrinsic irony to the experiments at the Lux Arbor Reserve site.

As Funk put it, she wasn’t trying to establish the perfect prairie. She was trying to understand different ways in which restoration efforts could fail and how history factored into that failure.

So even though the restored prairie standing at the site today is not perfect — or even good by Funk’s standards — it’s still incredibly useful. The team’s new biodiversity data is a great example of that.

The team measured several ecosystem parameters on the different plots, including decomposition activity and how many flowers grew that attracted pollinators. But perhaps the best illustration of the complex relationship between history, biodiversity and ecosystem function was in where a plot put its biomass.

In plots that were planted in 2014 and 2015 especially, native plants and prairie grasses became dominant, especially the prairie grass big bluestem. A lot of a plot’s biomass could be tied up in this grass, which can grow to 8 feet tall and become a pillar of a high-functioning ecosystem. In the 2016 plots, however, weeds and invasive species took over. These plots thus technically had more biodiversity than their 2014 and 2015 counterparts, but those more diverse plants weren’t providing as many useful ecosystem services.

“There were a lot of weedy species that were small, scraggly and not good at doing a whole lot,” Catano said. “In our experiment, the plots that had the most biodiversity were the least productive.”

(This helps drive home a lesson for nonscientists, too. “I regularly tell my friends who aren’t ecologists my favorite gardener lesson: ‘If you’re planting a wildflower garden, don’t let the weeds take hold in those early years!’” Funk said.)

Again, the conclusion isn’t that biodiversity is bad. Rather, the team’s findings add a new level of realism to how restoration ecologists must think about history and biodiversity in the context of successful conservation.

That realism doesn’t yet come with actionable solutions to ensure successful restorations, but there are hints and suggestions in the data for researchers to dig into. There’s also a whole host of other interesting questions that can be explored at the Lux Arbor Reserve site.

“There’s so much more we could ask of it,” Funk said. “What’s the soil look like in different aged plots? What are the microorganisms doing? The insects?”

“We’ve barely touched the tip of the iceberg,” Brudvig said.

“When you’re trying to figure out what’s actually going on in an ecosystem, there are so many layers,” Catano said. “But these are the things we have to grapple with to inform conservation and inform policy. That’s what gives me the motivation to dive in.”