Learning what makes the nucleus tick

Michigan State University’s Witold Nazarewicz has a simple way to describe the complex work he does at the Facility for Rare Isotope Beams, or FRIB. There is a nucleus in every atom. Atoms, in turn, make up matter — the stuff we interact with every day. But the nucleus is still shrouded in mystery. One of FRIB’s goals in creating rare isotopes, or different forms of elements, is to better understand what’s going on inside the cores of atoms.

In a new paper for Physical Review Letters, published online April 7, Simin Wang, a former research associate at FRIB, and Nazarewicz show how FRIB can spot signatures of unusual nuclear events and use those as windows into the nucleus.

“There will be a program at FRIB devoted to such measurements,” said Nazarewicz. “What we want to do is to understand the structure of the nucleus.”

As any child can attest, one of the best ways to understand how something works is to take it apart. In making rare isotopes, FRIB will create exotic nuclei that naturally fall apart or decay.

While some FRIB staff finish construction of the physical facility — which is scheduled to start scientific experiments in 2022 — theorists including Wang and Nazarewicz are developing computer models that will help interpret the new science it churns out as well as make predictions about nuclear behavior.

Nuclei are themselves built from subatomic particles known as protons and neutrons. There are certain nuclei that decay by creating pairs of protons or neutrons within the nucleus and then spitting them out. 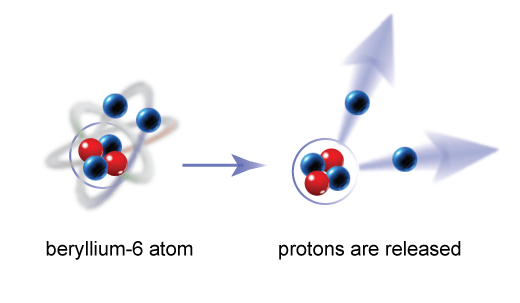 The graphic shows an unusual nuclear event in a beryllium-6 atom, where a pair of protons are released. Understanding the inner workings of the nucleus is key to research at FRIB. Credit: Facility for Rare Isotope Beams

For instance, this is the case for an isotope known as beryllium-6, which is a beryllium atom with four protons and two neutrons in its nucleus. Inside beryllium-6, the protons can pair up and when the nucleus decays by releasing one such pair, FRIB’s detectors will be able to spot the ejected particles.

What Wang and Nazarewicz have done is built a computer model that lets them essentially reconstruct what those protons looked like inside the nucleus based on what FRIB’s detectors see.

“We’re measuring those particles as probes, not because we are particularly interested in protons,” Nazarewicz said. “Those protons are messengers, carrying information about the nucleus from which they were emitted.”

The model also works similarly for rare nuclei that decay by emitting pairs of neutrons.

One of the biggest challenges of the work was developing a computer model that could trace these particles over a tremendous span of length scales.

Nuclei are measured in femtometers, mere quadrillionths of a meter. But FRIB’s detectors are, roughly speaking, a meter apart. For perspective, there are far more femtometers between your two pupils than there are meters between Earth and the sun.

Yet the Spartans’ model had to be able to account for goings-on at both the femtometer scale and the much larger distances that particles must cover to reach the detector. “You must be able to properly characterize the particles inside the nucleus and follow them as they decay from the nucleus and travel to the detectors,” Nazarewicz said. “It’s not trivial to do calculations across those scales.”

Nazarewicz credits Wang with powering through that challenge and driving the project to a successful conclusion. And, although Wang concedes it was difficult, he hopes that people remember not how hard the work was, but how exciting it is.

“Most of my research career has been devoted to developing theoretical tools connecting nuclear structure and experimental observables, so I can’t describe how excited I am that FRIB is nearing completion,” Wang said.

“Because the observables calculated with our new tool can be directly compared with experimental measurements, we’ll be able to make a lot of predictions and discover many new phenomena,” Wang said. “It will be a great era.”

The illustrative video shows the time evolution for the 2p decay of the ground state of beryllium-6 for different strengths of pairing interaction between protons. From S.M. Wang and W. Nazarewicz, Phys. Rev. Lett. 126, 142501 (2021). Courtesy of the American Physical Society.

This work was supported by the U.S. Department of Energy, Office of Science, Office of Nuclear Physics under awards No. DE-SC0013365 (Michigan State University) and No. DE-SC0018083 (NUCLEI SciDAC-4 Collaboration).

Michigan State University (MSU) establishes and operates FRIB as a user facility for the Office of Nuclear Physics in the U.S. Department of Energy Office of Science. Hosting the most powerful heavy-ion accelerator, FRIB will enable scientists to make discoveries about the properties of rare isotopes in order to better understand the physics of nuclei, nuclear astrophysics, fundamental interactions, and applications for society, including in medicine, homeland security, and industry.