Researchers at Michigan State University are using pheromones, passive barriers and the sea lampreys' parasitic suction against them.

Sea lampreys are a destructive invasive species that has threatened native fisheries in the Great Lakes for decades. Multiple teams of Michigan State University researchers are finding ways to harness sea lampreys' natural instincts to monitor, capture and control them.

Weiming Li, a professor with the Department of Fisheries and Wildlife within the College of Agriculture and Natural Resources, studies sea lamprey chemical mating signals called pheromones.

“Sea lampreys have had half-a-billion years to refine their chemistry,” Li said. “If we can find a way to disrupt their chemical signals, it might be more efficient in controlling their population.” 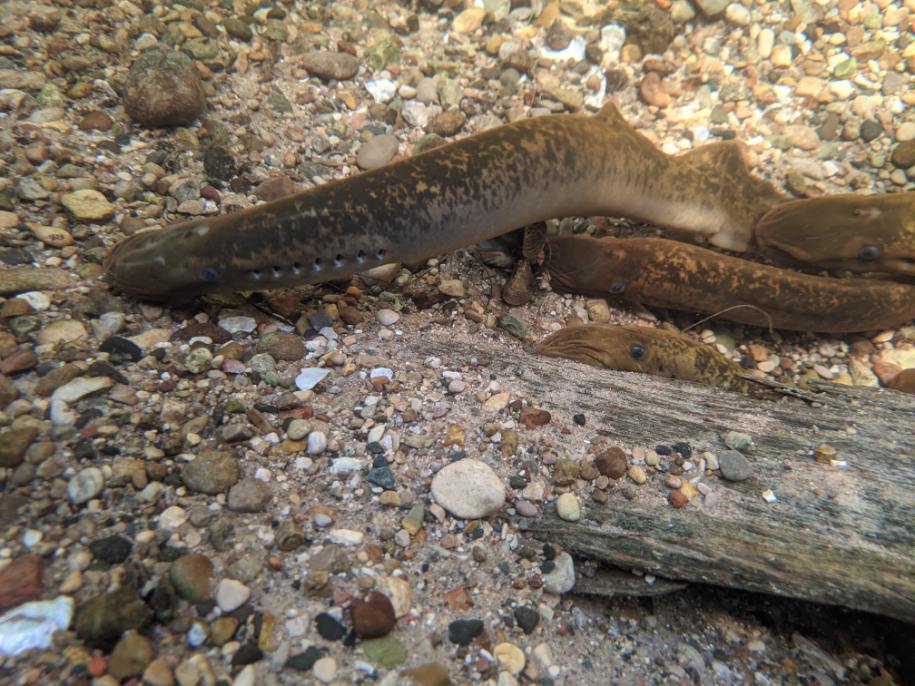 So far, Li and his team have discovered three pheromones. Sea lamprey larvae release a pheromone that attracts migrating sea lamprey adults to spawn nearby. Once on spawning grounds, mature males release two pheromones that attract females to mate.

“Once a sea lamprey detects male competition,” said Skye Fissette, a doctoral student. “It will release more pheromones, likely in an attempt to outcompete other males for mates."

When a sea lamprey is attacked, the damaged tissue releases an alarm cue odor that acts like caution cones on a highway, warning migrating lampreys to move around risky areas. In smaller areas of water, researchers led by Michael Wagner, an associate professor with the Department of Fisheries and Wildlife within the College of Agriculture and Natural Resources, are combining the alarm cue with a passive barrier to capture sea lamprey while letting native fish swim through. The strategy pressures lamprey to escape, but instead guides them towards an eel ladder, a device which forces the sea lamprey to slither through a series of pegs climbing up a steep ramp that extends out of the water. At the top, the sea lamprey falls into a trap and is collected for removal.

Even one sea lamprey passing through the barrier is too many.

“The males secrete powerful pheromones that will attract females from great distance and if they find each other, a female can lay 100,000 eggs and will infest a stream very quickly,” Wagner said. “We are hoping the development of this device will help the Great Lakes Fishery Commission meet their goal of passing native fishes while blocking sea lamprey to protect our fisheries.”

Adult sea lampreys attach to fish to feed off their blood. Xiaobo Tan and Nelson Sepulveda, professors in the Department of Electrical and Computer Engineering, are developing “smart” sensing panels that take advantage of a sea lamprey’s instinct to suck in order to record the mechanics of the attachment. “We were surprised to learn that the sea lamprey only sucks as hard as it has to,” Tan said. “Which makes sense, it doesn’t want to use up its energy that is otherwise needed for finding a mate and spawning.”

The research has been published recently in PLOS ONE and there is a YouTube video demonstration here.

“After more than half-a-century of research and development, we are just now focusing on using the most obvious lamprey-specific characteristic (oral suction) for lamprey control,” said Christopher Holbrook, a research fish biologist at the U.S. Geological Survey Hammond Bay Biological Station located near Millersburg, Michigan and collaborator on this work, “Modern technology, particularly advances in robotics and new materials, is making this possible.”

The Great Lakes Fishery Commission funded the work of Li, Wagner and Tan.