Uncovering how some corals resist bleaching

Climate change is bleaching and killing corals, but researchers from MSU and the University of Hawaii are investigating how some can stand up to a warming world.

Coral reefs are beautiful and diverse ecosystems that power the economies of many coastal communities. They’re also facing threats that are driving their decline, including the planet’s warming waters.

This threat hit extreme levels in 2015, when high temperatures were turning corals white around the globe. Kaneohe Bay in Hawaii was hit hard; nearly half of its corals bleached. Hidden in the aftermath of this extreme event, however, were biochemical clues as to why some corals bleached while others were resistant, information that could help reefs better weather warming waters in the future. These clues have now been uncovered by researchers at Michigan State University and the University of Hawaii at Manoa.

“It was kind of horrifying,” said coral biologist Crawford Drury, who witnessed 2015’s bleaching event from Florida before joining UH Manoa’s Hawaii Institute for Marine Biology, or HIMB.  “It’s disheartening to watch, but I try to think of it as an opportunity.”

How this disturbing event became an opportunity is now clear thanks to a Feb. 8 report in Nature Ecology & Evolution that showcases HIMB’s stewardship and MSU’s biochemical expertise.

The researchers discovered chemical signatures in the corals’ biology, or biomarkers, that are present in organisms that were most resistant to the bleaching. This previously hidden insight could help researchers and conservationists better restore and protect reefs around the world.

“Usually, we think of biomarkers as signatures of disease, but this could be a signature of health,” said MSU’s Robert Quinn, an assistant professor in the Department of Biochemistry and Molecular Biology. “This could help us restore reefs with the most resistant stock.”

Corals are symbiotic communities, where coral animal cells build homes for algae that provide them energy and create their colors. When corals bleach, however, the algae are lost and leave behind skeletons that are susceptible to disease and death.

This symbiosis also plays a role in a coral’s resistance and resilience to bleaching, which HIMB was in a unique position to investigate — literally. The institute sits right next to the reef, enabling experiments in real time. 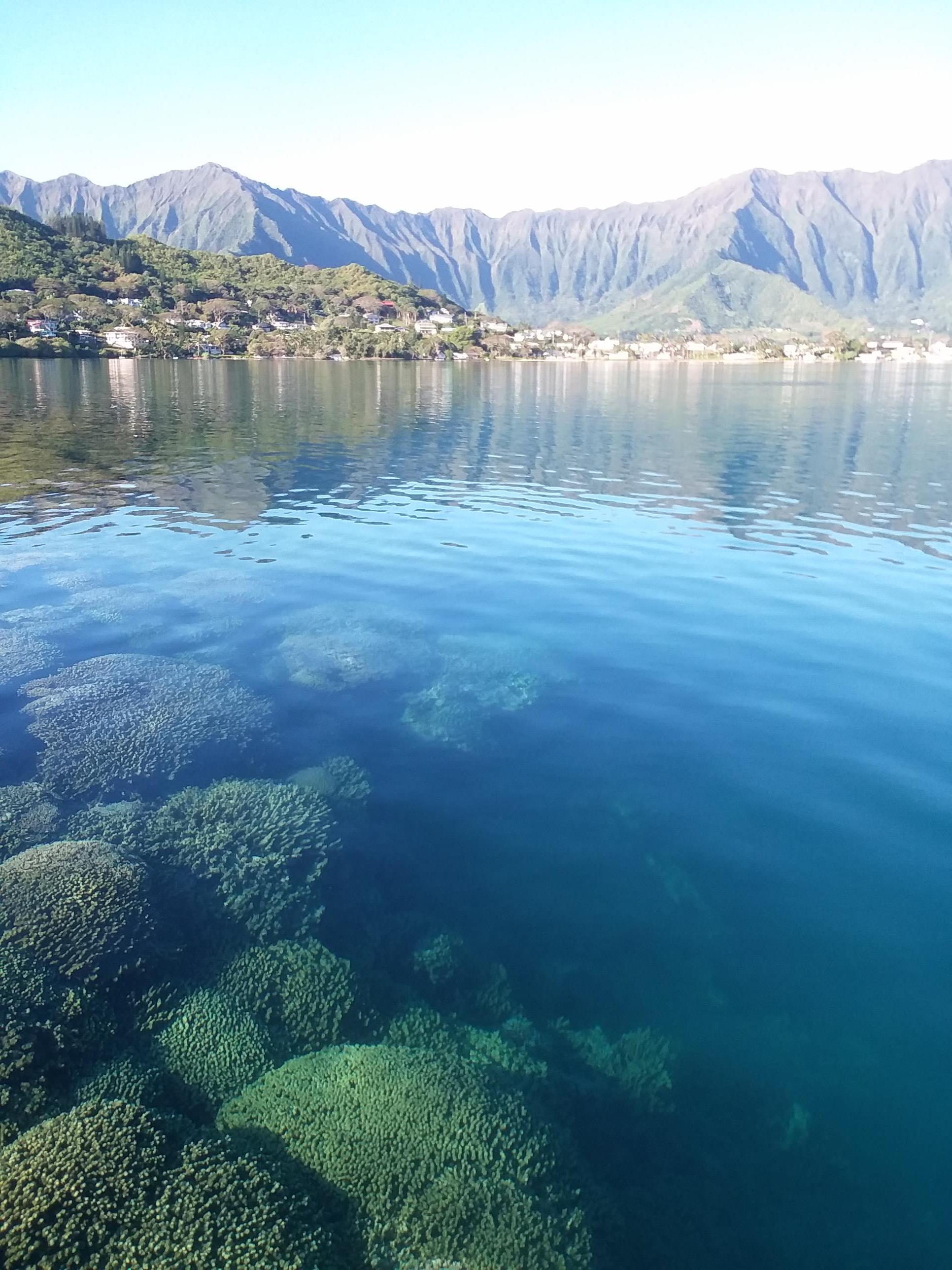 A view of coral reefs near Hawaiian shores, where bleaching was prevalent in 2015. Courtesy of Ty Roach (HIMB).

During the 2015 bleaching event, HIMB researchers in the Gates Coral Lab had tagged individual corals to keep tabs on them. Because most of the corals recovered, the team could follow them over time.

“We think about it as a biological library,” said Drury, the principal investigator with the Gates Coral Lab. “It was set up by researchers in our lab who knew it would be very valuable.”

Following the bleaching, the team compared and contrasted coral samples in the wild, noting how the organisms responded and recovered, making some surprising observations along the way. For example, neighboring corals could behave completely differently in response to high temperatures. One coral could bleach completely while its neighbor maintained a healthy golden hue.

To understand why, Drury and HIMB postdoctoral researcher Ty Roach, the lead author of the study, sent samples to Quinn at MSU. Here, Quinn and his team could thoroughly analyze the biochemicals of corals collected from this biological library using a method called metabolomics.

“I’m known more for my medical work,” said Quinn, who studies the biochemistry of health and disease in humans. “But I’ve always loved ocean science. My background is in marine microbiology.”

If the coral samples are the books in the library, Quinn’s lab used sophisticated equipment to reveal the biochemical language within. In particular, his team used tools known as mass spectrometers to understand what set resistant corals apart from susceptible ones.

“The corals are completely different in their chemistry, but you can’t tell until you run the mass spec,” Quinn said. “These mass specs are some of the most advanced technology on the planet.”

Quinn’s team found that corals that were resistant to bleaching and those that were susceptible hosted two different communities of algae. The distinguishing feature between these algal populations was found in their cells, in compounds known as lipids.

"This is not unlike the difference between oil and margarine, the latter having more saturated fat, making it solid at room temperature," said Quinn. This discovery poses all sorts of new questions for researchers: How do the corals get these different algae? Is this difference unique to Hawaiian corals or can it be found elsewhere? How can researchers promote the growth and proliferation of resilient corals in a warming world?

“Mass specs are such incredible machines and reveal intricate details of the chemistry involved. The biology is really the hard part.” Quinn said. “We’re working on new grants. There are so many avenues to explore.”

“This collaboration has been a great opportunity to ask and answer questions,” Drury said. “Hopefully, we’re just getting started.”

In the meantime, having this chemical information is promising for coral conservation. When conservationists reseed corals to help restore reefs, they can potentially select more resilient specimens based on their lipid profiles.

“We can use natural resilience to better understand, support and manage coral reefs under climate change,” Drury said.

“Conservation biology has some of the more successful stories in modern scientific history,” Quinn said, pointing to the resurgence of elk in Virginia and bald eagles in Michigan. “Someday, maybe we can add corals to that list.”