Michigan State University researchers are working with state and federal fishery agencies to help remove invasive grass carp from Lake Erie in a bid to limit its spread to the other Great Lakes.

“Grass carp can grow to the size of a small child,” said Travis Brenden, a professor with the Department of Fisheries and Wildlife within the College of Agriculture and Natural Resources. “They can get quite large and when they do, they don’t have any natural predators.”

An adult grass carp fish can grow to more than four feet in length and weigh up to 50 pounds. Each day the fish can eat 40% of their body weight in vegetation, devastating aquatic and terrestrial communities. Grass carp was first discovered in Lake Erie in the 1980s. MSU researchers have been working with the fishery agencies since 2014.

The first challenge in reducing population abundance is identifying where the fish are located. By tagging grass carp with an electronic transmitter, the researchers have turned the fish into a natural beacon revealing where other grass carp may be found.

Brenden, who is also the associate director of the Quantitative Fisheries Center, and his team wanted to identify where grass carp are in Lake Erie to study how they swim within the lake and potentially to other Great Lakes. The idea of tagging grass carp in Lake Erie provided the opportunity to do both. Once a grass carp is caught, the fish is anesthetized. A transmitter about the size of a AA battery with a six-year life is inserted into the fish’s abdomen. Once the carp is released, the transmitter emits an acoustic signal about ever three minutes.

Throughout shallow and deep areas of Lake Erie and some of the lake’s tributaries, like the Sandusky and Maumee Rivers, electronic receivers continuously listen for these transmitter signals. Receivers have also been placed in the other Great Lakes as well as in Lake St. Clair. Presently, there are more than 1,000 receivers that have deployed in areas of the Great Lakes. The date and time of these detections are then recorded in the receiver’s memory for eventual downloaded.

“When a receiver ‘hears’ a ping from a transmitter, it means a tagged grass carp is within half a kilometer (0.3 miles) of the receiver,” Brenden said. “The time series of these detections provide a glimpse of where grass carp tend to be located and the extent that they may move around,” Brenden said. “We were surprised to learn that some fish can swim up to 20-30 kilometers per day and other fish sometimes disappear for weeks or months at a time.” 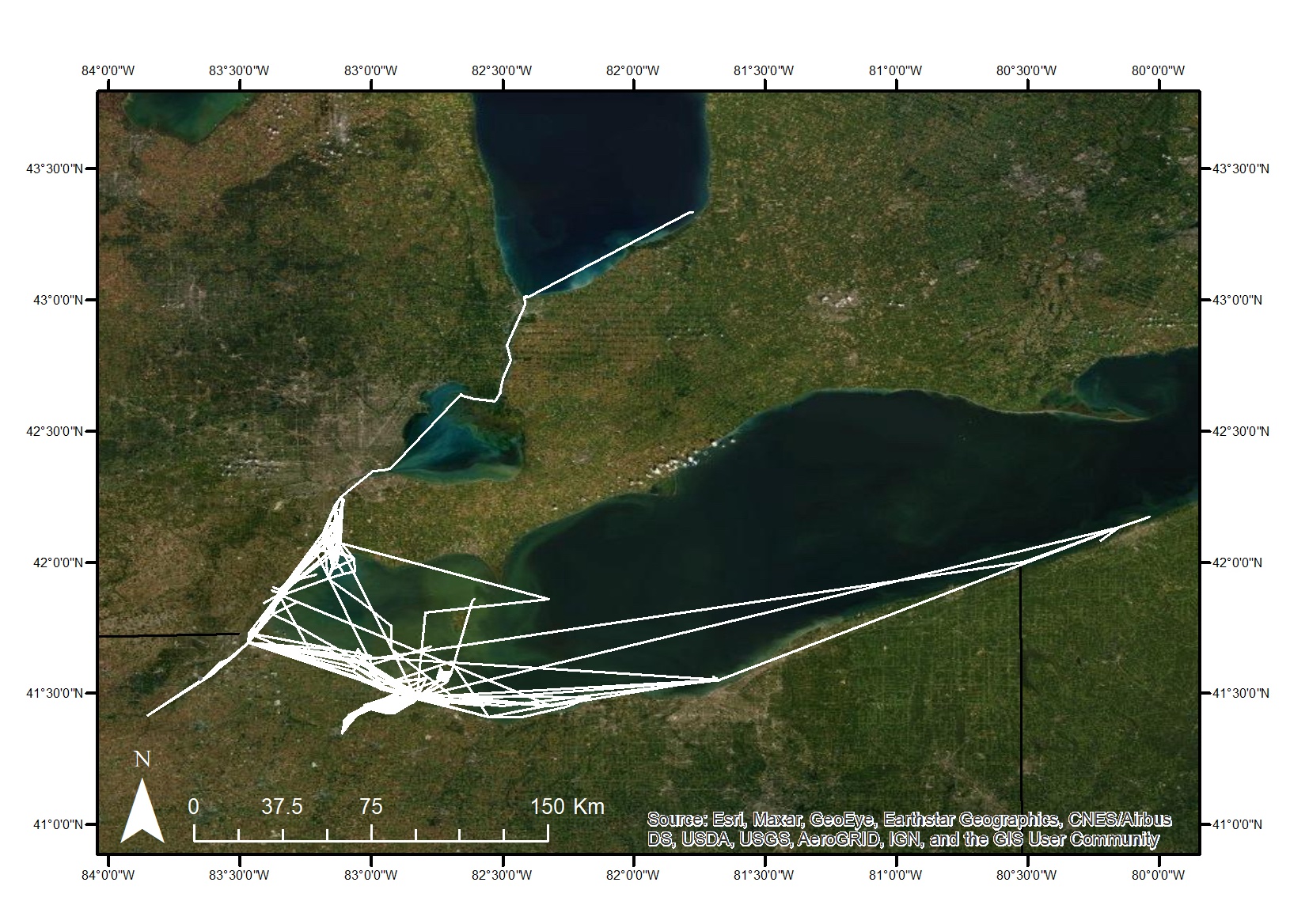 Using the data collected from the receivers, Brenden and his team have created maps to show where grass carp are and how they move within the Great Lakes. The Michigan and Ohio Departments of Natural Resources as well as the U.S. Fish and Wildlife Service use these maps to identify where response efforts should be concentrated. There are also several receivers in select areas of Lake Erie that send real-time text message alerts when a tagged fish is detected on a receiver.

“If a grass carp is detected, fishery agencies can quickly mobilize a strike team to travel to that area and attempt to remove other grass carp that might be there,” Brenden said. “Similarly, strike teams carry hand-held receivers and occasionally will listen to see if tagged grass carp may be located in a specific area of a lake or tributary.”

If a grass carp fish is found, the strike teams will sample in that area and attempt to collect and remove the untagged grass carp. “The ‘tagged’ grass carp fish is left behind because it is providing valuable fish data and unknowingly betraying other fish by giving up its location,” Brenden said. “We call them ‘Judas’ fish.”