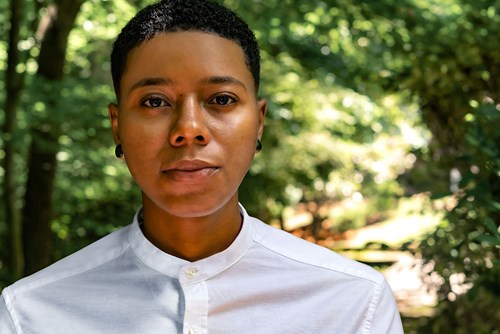 Briona Jones is a doctoral candidate in the Department of English in the College of Arts and Letters.

This past fall I began my graduate assistantship with Matrix: The Center for Digital Humanities and Social Sciences at MSU, working closely with the Enslaved project. In partnership with the MSU Department of History, University of Maryland and scholars from various institutions, “Enslaved: Peoples of the Historical Slave Trade,” was developed with five objectives in mind: people, linked open data, practices, scholarly recognition, and preservation and sustainability. Our collective aims to build an interconnected system of services and tools that would allow our community researchers to identify individuals involved in the slave trade.

During the first half of the semester, I was given the opportunity to adapt and construct biographies for formally enslaved peoples. Initially, this kind of work felt emotionally riveting. I felt deeply invested and connected to the people — perhaps ancestors — whose stories I wrote about.

Notably, I adapted a biography for Candy, a formerly enslaved person who was born in colonial New England. She was accused of being a witch and was considered one of the key figures in the Salem Witch Trials. Her story may sound familiar as it is one I remembered learning from a graduate level English course I took with MSU’s Yomaira Figueroa-Vásquez. In that class, we read Maryse Condé’s “Tituba: Black Witch of Salem.” Tituba was persecuted in ways similar to Candy; a Black woman who freed herself from enslavement — marronage — underscores the value of revolt, yet it also reveals how systems of oppression are constantly at work.

The latter half of my semester has turned its attention to ethics. Our most recent conversation considered how Enslaved can engage the broader community, especially Lansing and Detroit. As a collective, we want to think more deeply about praxis in digital humanities, which involves coalition building across various communities. We are in conversation and community with the Hutchins Center for African American Research at Harvard University, Colored Conventions, The Libr