Kandace Griffin is a doctoral student in fisheries and wildlife and is a member of the Applied Behavioral Ecology Lab in the College of Agriculture and Natural Resources. Griffin investigates how migrating sea lamprey use habitat features and chemical cues to avoid predators when moving through rivers with the goal of creating novel invasive species control methods. She is seeking a career creating science-based policy and management strategies for fisheries management and species conservation. 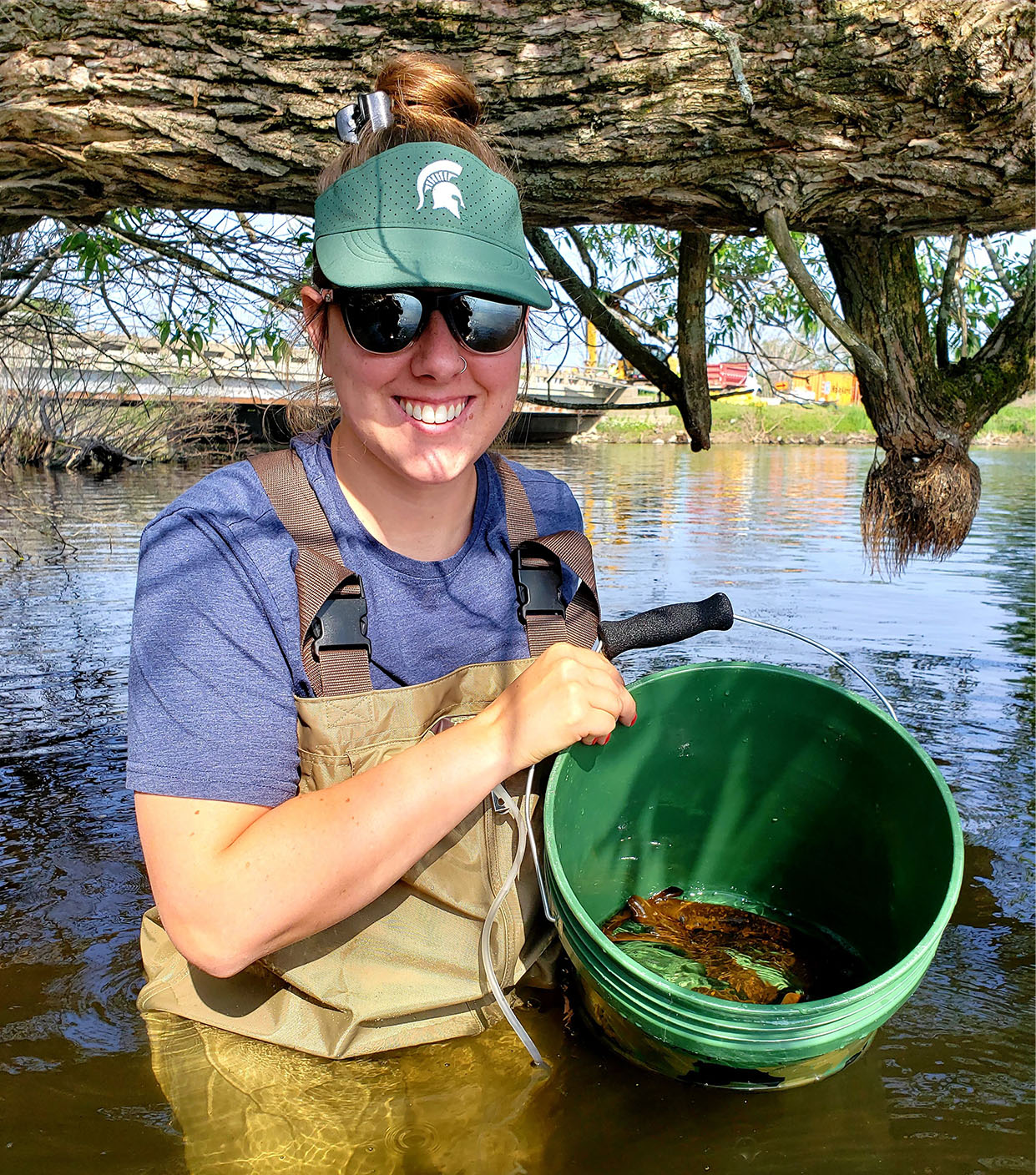 Each year the U.S. and Canadian governments mount joint operations to kill millions of invasive sea lampreys. I am among the very few trying to keep one alive. Well, 60 to be exact.

Before starting at MSU, I had never heard of a sea lamprey, but I quickly learned about their destructive history with the Great Lakes fishery, nearly wiping out the lake trout and whitefish populations in the Great Lakes.

Animal behavior and conservation have always been my passions. Coursework and internships provided theory and hands-on experience in animal behavior, but I had never worked in the aquatic world. I took a leap of faith because this position at MSU ticked many other boxes for me, but mostly I wanted to apply my knowledge and passions to the creation of novel solutions to ecological problems.

However, I never imagined I had to become a fish surgeon to fulfill this role. I had a lot to learn — from first holding a lamprey and not freaking out when they attach to me (they use their circular mouth like a suction cup to grab onto rocks in the river… or onto your arm) to finally completing surgery. The surgeries I perform are to implant a small acoustic transmitter inside the lamprey, which allows me to track their movement paths in three dimensions as they migrate upstream through the river. To reduce stress and the amount of time the animal is sedated, I have to intubate the fish with flowing water, make an incision about the width of your thumbnail, insert the tag and close the incision with two sutures in less than three minutes. Thankfully, no malpractice insurance is required!

I was so nervous on my first day of surgery. I had practiced on countless bananas (pro tip – bananas do not attack arms), but now it was showtime. This was going to be the most valuable fish I have ever held, not only because of the $550 transmitter I’d just implanted, but also because of the data I’d get for completing my degree and informing management. Every interaction with my fish must be as stress-free as possible from a quick and flawless surgery to careful release back into the river. After some mistakes and adjustments to the protocols and surgery setup, I became a more comfortable and efficient surgeon:  Incisions became smaller, sutures were quicker and smaller, and total surgery time went down. I had only 60 transmitters to implant. I needed every fish to survive and swim through the river just as every other lamprey that had not undergone surgery.

Understanding where the sea lamprey moves, and why, will allow us to create novel tools to control this invasive species. Currently, U.S. and Canadian managers rely on two main methods for controlling sea lamprey: 1) a targeted pesticide, or lampricide, which kills the larvae in streams; and 2) dams that prevent access to spawning ground. By knowing and manipulating sea lamprey movement, we could guide them into a trap, removing them before they make a bunch of baby lampreys.

Our lab is developing a device that can be installed in a fish ladder that would selectively block their passage through the fishway but allow native fish through. Having this tool would also allow for control efforts across more of the Great Lakes Basin where dams are failing or lampricide use is impractical or not valued. While sea lampreys are a pest in the Great Lakes, around the world other lamprey species need our help. Tools to guide lamprey movement could also be expanded to those situations, such as guiding Pacific lamprey around dams that block their migration. I am so excited that I have the opportunity to contribute to such a wide range of management and conservation concerns.