It’s no secret that Michigan State University is a leader in nuclear science. The university boasts the nation’s top-ranked nuclear physics graduate program. It’s also the home to the Facility for Rare Isotope Beams, a U.S. Department of Energy Office of Science, or DOE-SC, user facility that will power cutting-edge nuclear science for researchers around the globe.

In addition to enabling a world-leading science program with beams of rare isotopes, this unique facility can also become a source of rare isotopes that benefit a variety of other fields, including medicine, materials science and environmental studies. During routine operation for its nuclear physics mission — without interfering with FRIB’s primary users — extra, unused isotopes can be “harvested” using additional tools and infrastructure.

Isotope harvesting at FRIB is recommended by a national panel. The Nuclear Science Advisory Committee Isotopes Subcommittee recommended it in its 2015 NSAC Isotope Long Range Plan: “Research quantities of many of these isotopes, which are of interest to various applications including medicine, stockpile stewardship and astrophysics, are currently in short supply or have no source other than FRIB operation.”

The Office of Nuclear Physics in the DOE-SC is supporting Spartan scientists with a new grant worth $13 million over the next four years to build up FRIB’s isotope harvesting capabilities. The DOE Isotope Program supports the grant.

“This grant is about broadening the scientific impact of FRIB,” said the grant’s lead investigator, Greg Severin. “While physicists at FRIB are making groundbreaking fundamental discoveries, our team will be supporting exciting applied-science research.”

When unused rare isotopes are harvested at FRIB, they will become available for scientific applications such as medicine, biochemistry, materials science, horticulture and astrophysics. Credit: Facility for Rare Isotope Beams

One of the most direct examples of that is in medicine, in what’s known as positron emission tomography scans, or PET scans, said Severin, who is an assistant professor at FRIB and the MSU Department of Chemistry.

Before a PET scan, a doctor injects a patient with a tracer that contains isotopes that emit a small amount of radiation.

A scanner then detects the radiation emitted by the tracer, which helps doctors diagnose and treat disease, such as cancer tumors, inside patients.

While pushing the boundaries of nuclear physics, harvesting “bonus” isotopes, like those used in PET scans, could thus help researchers develop novel cancer treatments and diagnostics.

“We make isotopes that are very important to researchers,” Severin said. “FRIB is also completely unique, so our researchers and students have access to an amazing opportunity that you can’t find anywhere else.”

In 2018, the DOE-SC awarded Severin and his team a grant to prove that isotope harvesting was feasible. The team did that by building a small-scale isotope harvester in FRIB’s predecessor, the National Superconducting Cyclotron Laboratory. Now, with the new grant, the researchers are putting that plan into action at full scale.

Understanding how the team will harvest isotopes requires knowing a little bit more about how FRIB works. 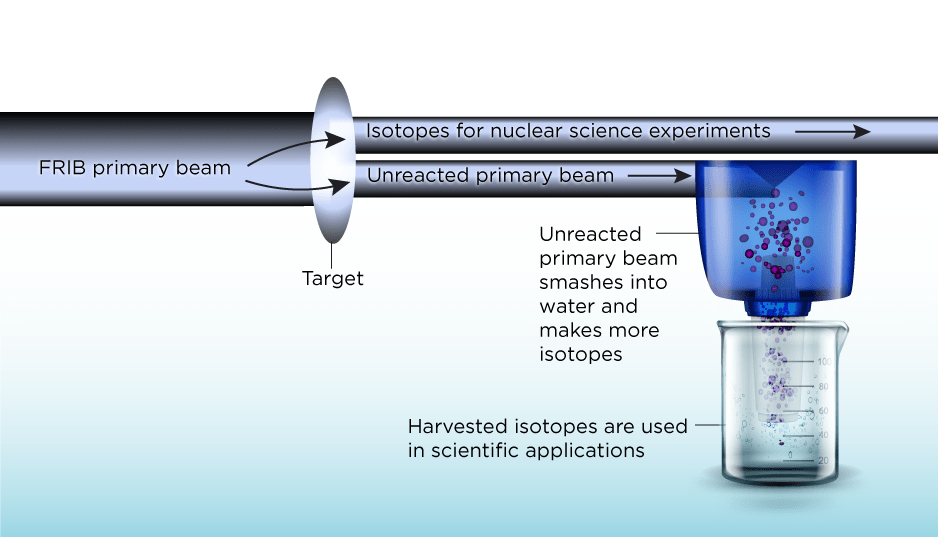 “What makes FRIB special is that it can take almost any stable nucleus and accelerate it to half the speed of light,” Severin said.

Stable, in this context, means the nuclei do not decay. FRIB creates a beam from these really fast nuclei and sends that barreling through a target made of carbon or beryllium atoms. Nuclei in the beam smash into the target’s nuclei, leading to all sorts of nuclear reactions that create unusual and unstable isotopes, or different forms of an element.

What exits the target, then, is a new beam filled with rare and unstable isotopes.

The facility then filters this beam using magnets to extract the rarest of the rare isotopes for FRIB’s primary experiments.

“This is stuff that you find in supernovae or extreme stellar environments, which help scientists study the origins of matter in the universe,” Severin said.

But he’s after slightly more terrestrial isotopes. Not all of the stable beam reacts with the target, and this unreacted portion of the beam continues into what’s known as a beam dump.

In a more typical particle accelerator, a beam dump would be made out of metal. FRIB, however, will send its unreacted beam into a beam dump made of water.

Here, the beam can react with water, creating additional rare isotopes that researchers will extract using technology similar to what households use to remove hard minerals from water.

“It’s the same thing you do with a water softener,” Severin said. “Except we send the clean water back to FRIB to reuse and we keep the radioactive isotopes.”

Planning and preparation are already underway for the new lab, dubbed the Isotope Harvesting Vault. The researchers are eager to start building later this year.

“Putting this lab together is really exciting,” said Chirag Vyas, a research associate at FRIB and a project scientist on the new grant. “And the research is going to be even more exciting.”

The lab is scheduled to be completed by fiscal year 2024, but the team aims to start some work before then. “I’m already writing proposals to do science,” Severin said. “I’m very excited about what we will be able to accomplish with our new isotope harvesting lab.”