For the nearly 50,000 students living and learning at Michigan State University, campus becomes a second home. Arriving in East Lansing, students have the opportunity to engage with others from across the state, nation and world, but sometimes navigating these interactions isn’t as easy as learning the winding paths along the Red Cedar River.

The Multi-Racial Unity Living Experience and Intercultural Aide program, or MRULE-ICA, within the Office of Cultural and Academic Transitions, aims to unite MSU students across their differences, supporting a campus climate in which intercultural engagement and developing meaningful relationships is valued and practiced. “The MRULE-ICA program’s educational goal is the building of cross-cultural communities among diverse students,” says Terrence Frazier, assistant vice president for Student Affairs and Services. “Students who participate in the program truly gain a stronger understanding of themselves and others through deep reflection of lived experiences.”

With MRULE celebrating its 25th anniversary in the 2021-22 academic year and the Intercultural Aide program’s roots dating back to 1969, the program is an enduring presence on MSU’s campus, facilitating these meaningful interactions among students through decades of social change. As a student-centered organization, MRULE-ICA has maintained its record of working to bridge racial and cultural divides, expanding into an inclusive and influential resource at MSU.

As Spartans prepare to come to campus this fall after a formidable year, the role of programs like MRULE-ICA is more crucial than ever.

The MRULE and ICA programs began as separate entities on campus before combining forces in 2014. Richard Thomas, a historian specializing in interracial unity and Black Detroit, was involved in the creation of both programs.

“The mission of MOSAIC, to bring people together across differences, was aligned with what Jeanne had been doing since MRULE’s inception,” says Chen-Hernandez. “Since we were both doing intercultural engagement work at MSU, it was eventually inevitable that we combine our efforts and resources.

A cornerstone of MRULE-ICA is its Round Table Discussions, offered Monday and Tuesday evenings in residence halls and MOSAIC: The Multicultural Unity Center on campus. Open to all students, these discussions cover topics from educational inequity and stigmas surrounding mental health to gender norms and racial identity. 
Jasmine Rivera, a 2003 MSU alumna and former MRULE student leader, recalls “emotional and heated” meetings around one particular topic during her first two years in MRULE.

“Affirmative action was a top issue, as the University of Michigan’s Supreme Court case was in process,” says Rivera. “Tensions were high in the student body.”

As time progressed, Rivera says her fellow students' perspectives evolved due to the exposure to experiences of affirmative action other than their own.

“MRULE does not aim for colorblindness or the superficial conformity of ‘just getting along’ by avoiding tough subjects. It thrives on challenging ideas and unity in diversity,” says Rivera. “Students learn to be fearless and trust the value of their own voices while listening to others with open minds. It’s that shared experience of personal evolution and tension between perspectives that leads to closer, more authentic relationships.”

“Students learn to be fearless and trust the value of their own voices while listening to others with open minds. ” - Jasmine Rivera, former MRULE student leader

More than 250 Round Table Discussions are held on campus each year, allowing students to engage in civil conversations and explore complex issues in a safe, open-minded environment. 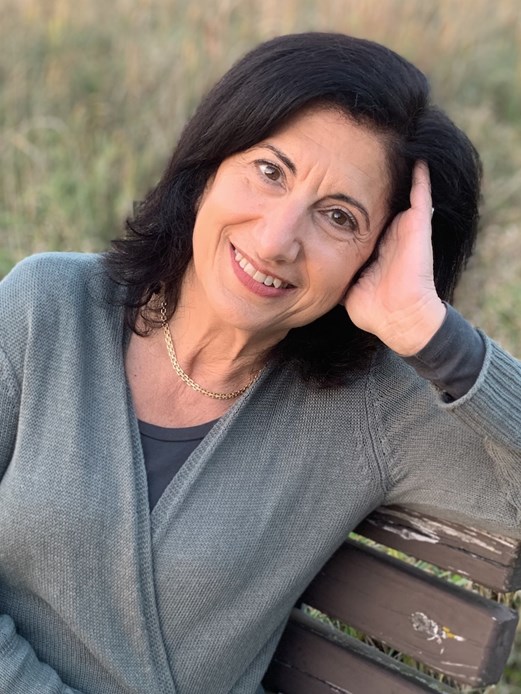 “It isn’t just come in, say your opinion and leave,” says Gazel. “It’s a pedagogical approach that creates a vibrant learning community. We bring global issues to the center of our curriculum and through the study of historical through-lines and the development of genuine relationships, we connect with our common humanity. There are many differences unfolding throughout the practice, but at the core is genuine love.”

“We really value the ways Intercultural Aides assist with community development for on-campus students,” says Coree Newman Coronado, associate director for residence education in Residence Education and Hospitality Services. “As residents and student leaders, their interactions within the residence halls add to the energy and vibrancy in the community.” 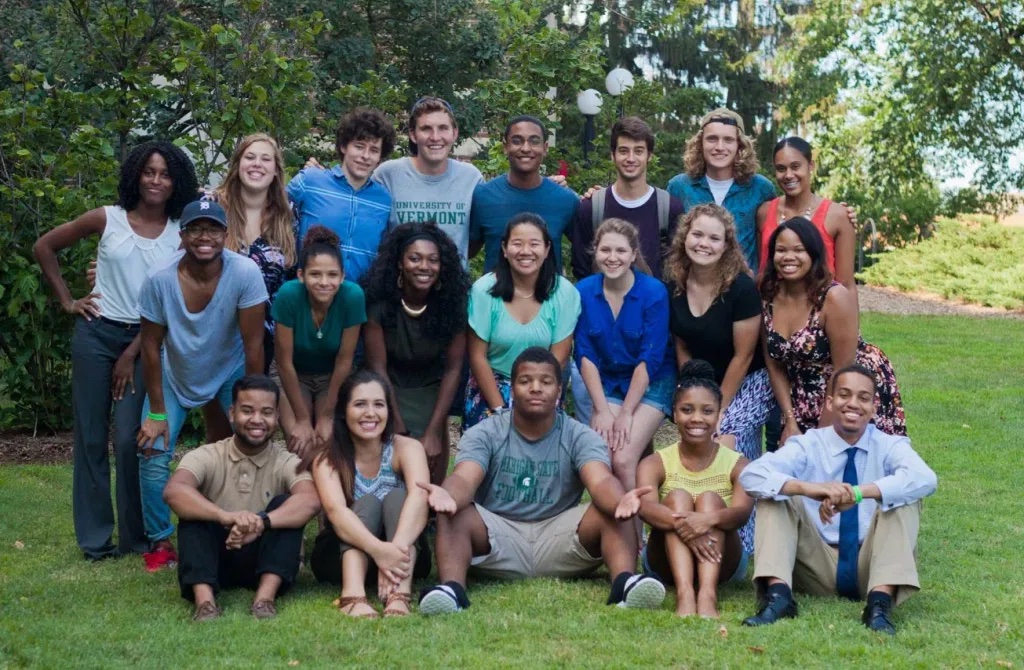 Intercultural Aides at MSU live in select residence halls for the purpose of engaging students from all backgrounds in learning opportunities within their living communities. Similar to the Resident Assistant program, Intercultural Aides are a source of support for students transitioning to life on campus and beyond. Aides partner with RAs to foster an inclusive campus climate, supporting student identity development, a sense of belonging and academic success. Compensation for the Intercultural Aide position includes a single room and meal plan for the year.

Between 60 and 70 aides serve in the program every year, mentored and educated throughout the process by MRULE-ICA professional staff. To recruit ICA applicants, Student Affairs and Services staff members reach out to various racial and ethnic student organizations as well as work with campus partners to promote the opportunity to students. “The MRULE-ICA program has been a transformational force in the residence halls at Michigan State University,” says Eduardo Olivo, interim associate director for Diversity Equity and Inclusion in REHS. “The depth and authenticity of the learning spaces offered to residents by the MRULE-ICAs is a national best practice. This is one of the very few DEI programs at MSU that combines peer education, dialogue, rigorous scholarship and real-world applications in how the conversations with residents are framed and implemented.”

The selection process occurs during the spring semester prior to the academic year they will serve. Intercultural Aides are hired to perform their roles for one academic year, though students are encouraged to reapply if they are interested in continuing their work. “The MRULE-ICA program allows you to meet new people,” says Thomas Antishin, a 2021 MSU graduate and ICA program alumnus. “I still remember one of the first things my first supervisor in the program said to me was, ‘Every day on Michigan State’s campus, you have the ability to meet someone completely different from you, but how many times do you actually do that?’ By involving yourself in the program, you’re able to have open and honest conversations with people who think completely differently than you.”

“I value supervising in this program because it is such a dynamic, multidisciplinary learning process," says Dreux Baker, an MRULE-ICA supervisor who previously supervised Antishin. "We are building capacity with students, no matter background or major, to become more conscious, engaged citizens of the world.”

Serving the local and global community

In addition to helping form an inclusive community on campus, MRULE-ICA’s mission also aims to connect students with service opportunities both locally and internationally. The MRULE program began a partnership with Detroit’s Neighbors Building Brightmoor in 2011, participating in several projects alongside neighbors to clean, build and maintain community gardens. Lansing’s Village Summit Community Center and Allen Street Neighborhood Center have also received support from the MRULE-ICA program over the past decade. 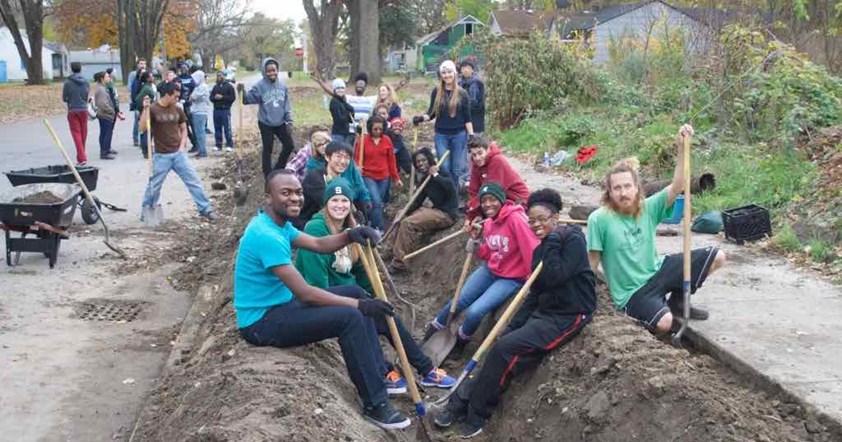 With the participation of MSU students through MRULE-ICA and an education abroad program focused on race relations in South Africa, Vumundzuku-Bya Vana/Our Children’s Future in Zonkizizwe opened its doors in 2007. That program provides after-school activities and hot meals to children and youth as well as psychosocial support peer education courses. Since its founding, MRULE-ICA has continued to support the initiative in South Africa, including a pen pal program.

In recent years, MRULE-ICA has coordinated with MSU’s Center for Community Engaged Learning for its service days in the fall and spring; this partnership has created opportunities for students to connect and partner on projects with MSU alumni from local organizations, such as the Metro Detroit Youth Club.

Working through and beyond the pandemic

The suspension of in-person instruction at MSU in March 2020 due to the rise in COVID-19 cases posed many challenges for the campus community. For a program that thrives on the interpersonal relationships of its students, MRULE-ICA staff and students found ways to keep the connection alive, even remotely.

Thomas Antishin, a 2021 graduate, began working as an Intercultural Aide during the 2018-19 academic year and served as a virtual MRULE facilitator during his final semester at MSU. Despite the various challenges of the pandemic, he says he found the greatest connections made in the Round Table Discussion space were during the virtual sessions. “The pandemic greatly affected the way ICAs worked,” Antishin says. “We pride ourselves on being able to build genuine relationships across differences, which is hard to do when you cannot meet students face to face. However, I really feel as though the program came together to recognize the challenge that the virtual environment placed on us and developed ways to overcome those challenges.”

Intercultural Aide facilitators worked with MRULE-ICA professional staff to find the best way to present information that would feel engaging and exciting to participants, particularly in a virtual environment. In addition to Round Table Discussions, students connected via social media and online games to continue their conversations.

“It was truly reimagining what a genuine relationship can look like and expanding it to the understanding that interpersonal connection is the primary aspect of it, while physical presence more easily fosters it,” says Antishin.