Mapping the lake trout genome to ensure the species’ future

Lake trout is an iconic native species to the Great Lakes. An MSU doctoral student is leading an effort along with his professor and an international team of researchers from the U.S. and Canada spearheaded by Louis Bernatchez at Université Laval to create a reference genome for lake trout to support state and federal agencies with reintroduction and conservation efforts.

“Since the glaciers melted and formed the Great Lakes, lake trout was the top predator,” said Kim Scribner, a professor in the Department of Fisheries and Wildlife within the College of Agriculture and Natural Resources. “Lake trout adapted morphologically (how fish size and shape have changed) and physiologically (how fish behavior and response to stress have changed) to these diverse and newly formed lake environments.”

Overfishing and predation by invasive sea lamprey reduced Great Lakes populations to near extinction between the late 1940s and 1960s. Only populations in Lake Superior and Lake Huron survived.

State and federal agencies worked together with local fish hatcheries to capture the diversity represented in these remaining populations in order to develop hatchery strains that could once again thrive in the Great Lakes.

While multiple lake trout strains were used, recent research suggests that Seneca strain lake trout originating from the Finger Lakes region of New York have the best chances of surviving and thriving in the Great Lakes.

The research from the team was published on Aug. 5 in the journal Molecular Ecology Resources.

The lake trout reference genome will enable researchers to identify genetic differences between hatchery strains, determine why some strains perform better than others in certain environments and locate genes associated with morphological and physiological diversity in the species.

Between 80-100 million years ago, the ancestor of all salmonid species that lake trout belong to went through a whole genome duplication event so that many of the sequences that make up the lake trout genome are repeated in different locations on their DNA. Determining the correct locations of these highly similar duplicated sequences posed a significant challenge.

“The total haploid genome size of lake trout is approximately 2.3 billion base pairs,” said Scribner, who is also a professor in the Department of Integrative Biology within the College of Natural Science. “Which is actually about two times what we would normally expect a typical fish genome to have.” 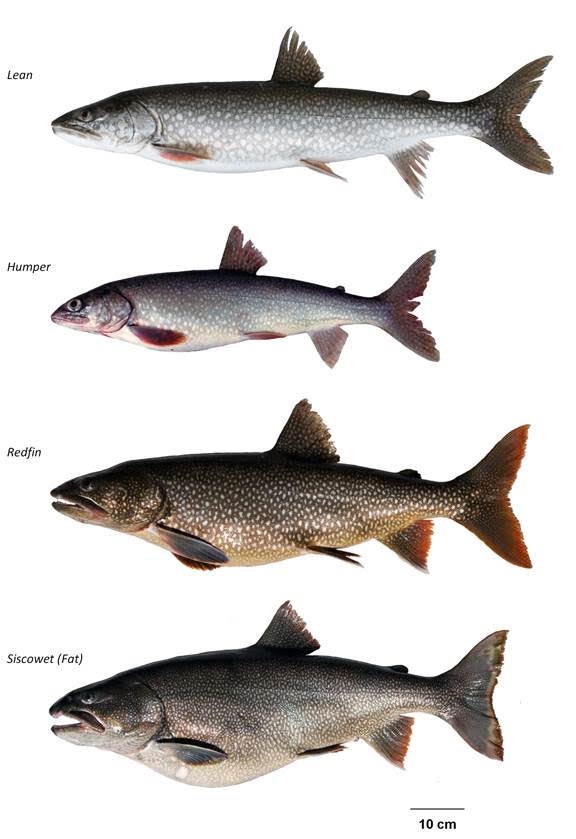 Lake trout found in the Great Lakes. Courtesy of Andrew Muir
To determine the correct locations of these duplicated sequences, the researchers assembled the genome using DNA from what is called a gynogenetic double haploid individual, which only possesses maternal DNA and lacks diversity. The researchers also produced a gene expression dataset, which allowed them to determine the locations of protein coding genes within the genome.

The reference genome will allow researchers to easily compare the genomes of morphologically and physiologically distinct forms of lake trout — lean, humper, redfin and siscowet — and spot the genes with the largest genetic differences between the trout types.

“These sorts of analyses and the genome annotation tell us where we needed to focus,” said Seth Smith, a doctoral student in the Department of Integrative Biology within the College of Natural Science. “Now we have the tools to figure out what is important biologically.”

“Lake trout are central to the culture of the Great Lakes region and have faced so many conservation challenges over the last decades,” said Smith, who is also in the Ecology, Evolution, and Behavior program at MSU. “Having a publicly available map of the lake trout genome removes most of the initial hurdles associated with doing conservation-oriented genomic research.”