When it comes to nuclei and neutron stars, we have to account for what we don’t know, says John A. Hannah Distinguished Professor of Physics at MSU

Uncertainty is part of life. There’s just no escaping it, even in a science as precise as nuclear physics. Witek Nazarewicz, John A. Hannah Distinguished Professor of Physics and chief scientist at the Facility for Rare Isotope Beams at MSU

While scientists work to develop ideas and experiments to minimize that uncertainty, they mustn’t forget about it, said Michigan State University’s Witold Nazarewicz. To that end, he and collaborators in Germany and Italy published a reminder of sorts in the journal Physical Review Letters.

“It’s important to remember that experimental measurements and theoretical models must be accompanied by error estimates,” said Nazarewicz, John A. Hannah Distinguished Professor of Physics and chief scientist at the Facility for Rare Isotope Beams, or FRIB. “And things can be understood better when you consider those uncertainties.”

Here, Nazarewicz is referring to many discussions following the successful outcome of the highly anticipated Lead Radius Experiment at the Thomas Jefferson National Accelerator Facility in Virginia. The experiment was working to deduce the neutron size of a lead atom’s core, or nucleus, through a measurement of a tiny left-right asymmetry in electron scattering.

This experiment — known as PREX, which rhymes with “T. rex” — looked at a lead nucleus with 82 protons and 126 neutrons. The P in PREX comes from lead’s abbreviation on the periodic table, Pb.

Scientists knew that this isotope or version of lead would have a “neutron skin” because it has more neutrons than protons. That is, the neutrons would stick out ever so slightly farther than the protons.

What the early theoretical analysis of the PREX result has suggested, though, is that this skin is a few quadrillionths of an inch thicker than many scientists had expected. And, again through the work of theorists, this teeny tiny skin can have astronomical implications: It can be related to the size of celestial objects such as neutron stars.

Neutron stars are fascinating for many reasons, including their mind-boggling density. They are incredibly massive — the “typical” neutron star has 40% more mass than our sun — and incredibly small, by star standards. You could fit about five neutron stars with the mass of seven suns between East Lansing and Ann Arbor.

And lead’s unexpectedly thick neutron skin could imply that these stars are larger than expected. Not dramatically larger, but enough to send “a psychological jolt to the community,” said Jorge Piekarewicz, a professor of theoretical nuclear physics at Florida State University, in an interview with Science magazine this April.

The researchers found that when the PREX data are explained by a theoretical model, another basic nuclear property of lead, called the dipole polarizability, cannot be reproduced. Put another way, there’s not a single current model that can consistently account for what is known about properties of the lead nucleus and the PREX measurement. 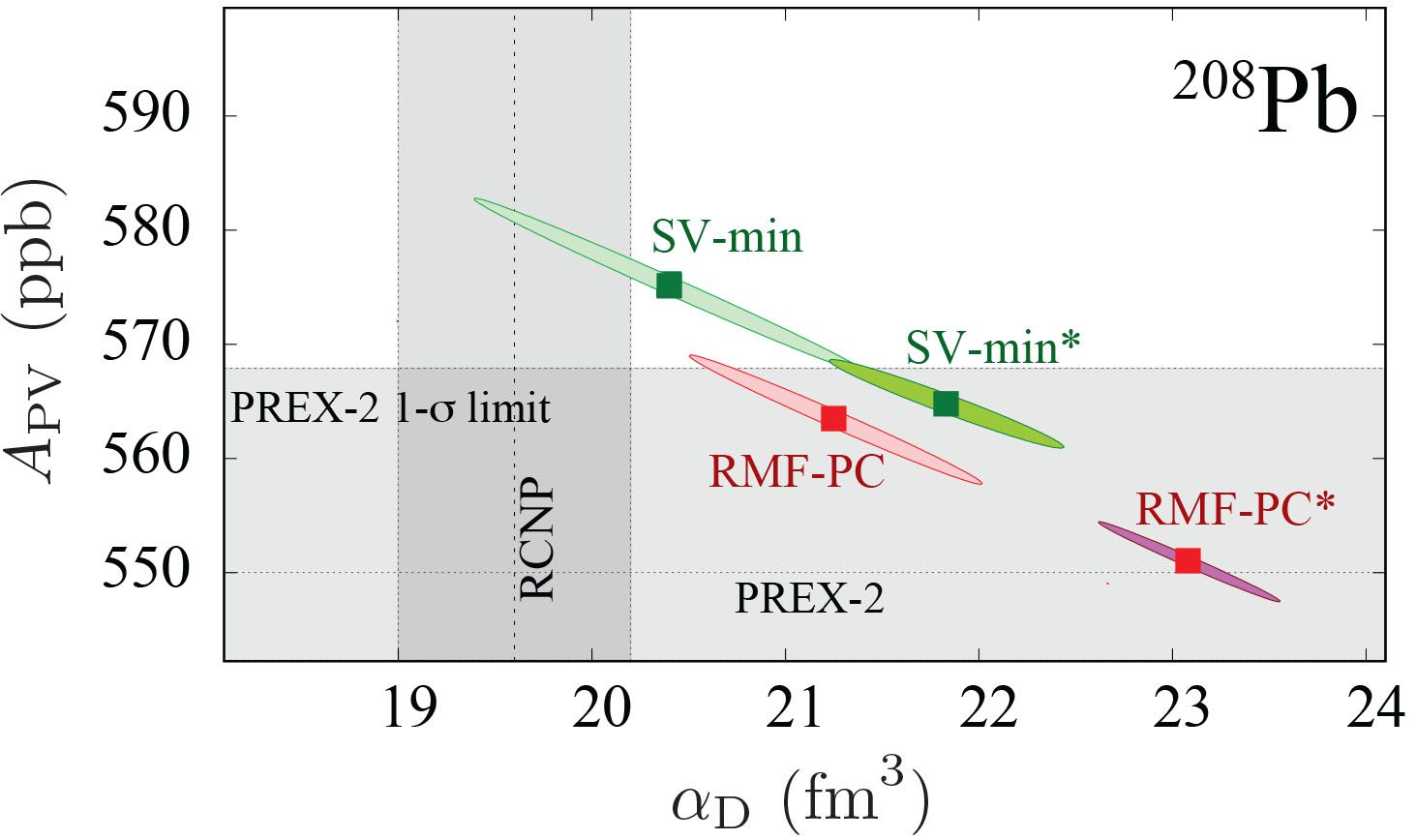 This graph shows the results of two experiments on the lead-208 isotope in gray along with four models used to interpret the results in red and green. The take-home message here is that no single model can reproduce both experiments.

One way of looking at this disconnect between theories and the PREX experiment is that the models are flawed or broken. But Nazarewicz cautioned against that interpretation.

“What we’re saying is ‘hold your horses,’” Nazarewicz said. “We need to understand the PREX result better before drawing far-reaching conclusions.”

That is, there’s some uncertainty.

In their new analysis, Nazarewicz and his colleagues paid close attention to the uncertainties or “error bars” that are part of the experiment and the models used to interpret it. When those error bars are considered, the picture that emerges is that the PREX result and models are more consistent than they initially may have appeared.

“We don’t have any compelling evidence at present that neutron skins and neutron stars must be bigger than predicted by standard models of atomic nuclei. Although this may not be the most exciting outcome, it takes nothing away from the importance of the PREX result. It simply shows that it’s too early to be making definitive assertions about the size of neutron skins and stars, which will require more experiments and lots of model developments,” Nazarewicz said.

With FRIB coming online in spring 2022, it will also offer new avenues to explore these problems. Indeed, studies of neutron skins and neutron stars are key components of FRIB’s science portfolio.

“The next generation of experiments will help.” Nazarewicz said. “But, considering the current data, there is no immediate need to revisit our textbooks.”