Assaf Gilad, Chief of the Division of Synthetic Biology and Regenerative Medicine at MSU’s Institute for Quantitative Health Science and Engineering

The duo is developing molecules inspired by nature to help medical diagnostics such as MRI scans keep pace with emerging therapies that can treat diseases more precisely while improving patient safety. Their innovative approach, which has earned them a $2.2 million grant from the National Institutes of Health, is the result of people from different fields coming together to solve the same problem.

“In the past, a lot of science has been attributed to a single person, whether it’s Albert Einstein or Jonas Salk,” said Gilad, a professor of biomedical engineering. He’s also the chief of the Division of Synthetic Biology and Regenerative Medicine in the Institute for Quantitative Health Science and Engineering, or IQ, at MSU.

“I think people are now starting to realize that it’s the interaction between disciplines that normally don’t interact, between people that don’t normally work together, that’s letting science answer the really challenging questions,” Gilad said. “That’s where the magic happens.” “This project shows the synergy between a computational modeling approach that is virtual and an experimental approach that’s measuring things in the lab,” said Banzhaf, the John R. Koza Chair in Genetic Programming in the Department of Computer Science and Engineering. “It’s proving you can bring more efficiency to the scientific discovery process.”

The researchers first met through mutual acquaintances in the Biocomputational Evolution in Action Consortium, or BEACON, a National Science Foundation Science and Technology Center led by MSU. Gilad then invited Banzhaf to give a presentation at IQ and the duo clicked, forming a collegial relationship that would give rise to this interdisciplinary NIH project.

“We have similar perspectives on science, but we come at it from completely different points of view,” Gilad said.

“It’s a natural fit,” said Banzhaf, who was recruited to MSU in 2016 as part of the Global Impact Initiative.

The collaboration leverages the Banzhaf Lab’s expertise in predictive programming to help optimize the Gilad Lab’s prowess in engineering new or improved functions into biological systems. In the case of this grant, the team is creating proteins and peptides — biomolecules that are the building blocks of proteins — that can help with medical imaging and diagnostics.

For example, sometimes doctors need to use what’s known as a dye or contrast agent to enhance MRI scans. Physicians will inject the dye into patients to get a better look at what’s going on to make more detailed and accurate diagnoses. These contrast agents typically incorporate a metal known as gadolinium.

Gadolinium is a bit of a blunt instrument, especially in comparison to emerging treatments that act only on specific cells or parts of cells. And, in some cases, gadolinium-based dyes can lead to health complications, which garnered public attention in 2017. Gena O’Kelley and her husband, martial artist and actor Chuck Norris, filed suit, later dropped, against health-care companies after O’Kelley developed debilitating pain that the couple attributed to contrast agents.

“With gadolinium, there are some concerns,” Gilad said.

The Spartan team is working to reduce or replace conventional contrast agents with biocompatible peptides and proteins that, like the more precise therapies in development, target specific parts of a patient’s biology. 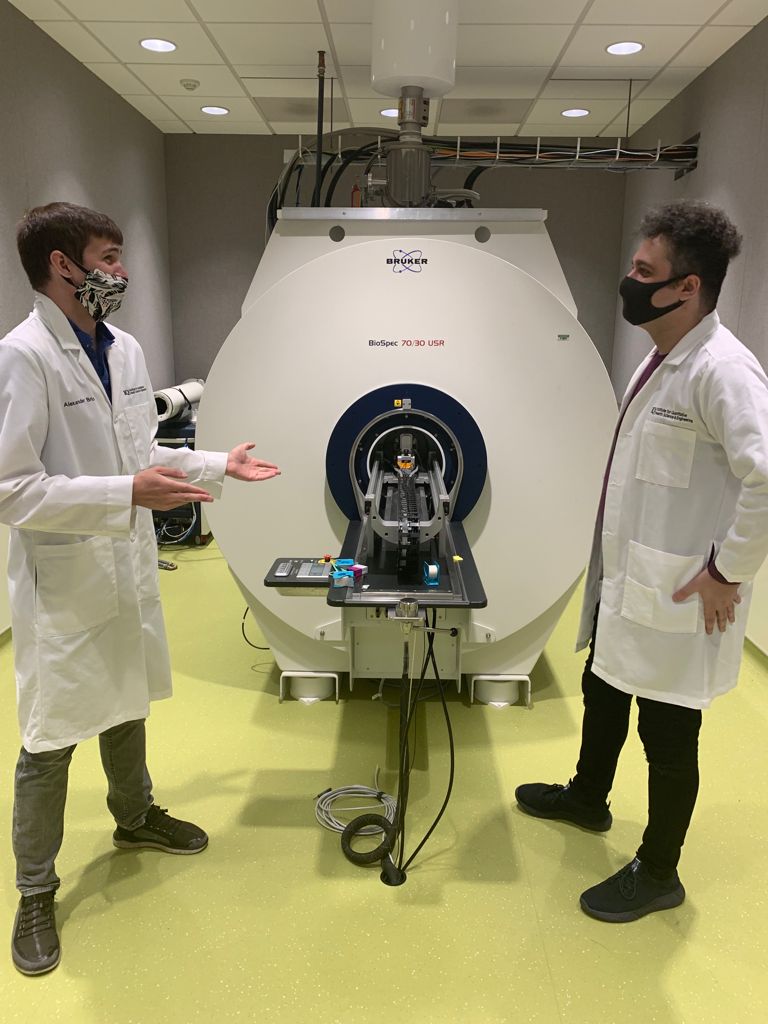 Banzhaf’s group has developed a special type of computer programming that uses machine learning — a type of artificial intelligence — to help find the most promising candidates for the job. By focusing experiments on the molecules identified by computation, researchers can save precious time and money.

This is just one example of where this approach brings value to health and medicine, and the Spartans are working to further demonstrate that value with the new NIH grant. But they’ve already had some success on this front, thanks to two graduate students, Alexander Bricco in the Gilad Lab and Iliya Miralavykomsari in the Banzhaf Lab.

Gilad and Banzhaf said their students came together about three years ago to spearhead and evolve it to the point where they could secure this grant — which has in turn created open positions for more grad students and postdoctoral researchers to join the effort.

“We’ve been here to advise them and help them stay on track, but the main ideas and contributions are coming from our students,” Gilad said. “There’s a great chemistry between the two of them. It’s their unique personalities and talents that led to this work.”

It’s easy to see a parallel to how Gilad and Banzhaf came together in this next generation of Spartan researchers. There’s the shared scientific interest, coming from different but complementary backgrounds. On top of that, they just clicked.

“The human side of science, the social side of this is really important,” Banzhaf said.