One in ten babies is born prematurely in the United States, but a blood test during a routine prenatal visit could reveal if a woman is at risk of a preterm delivery, according to a Michigan State University researcher.

“Preterm births are common,” said Hanne Hoffmann, an assistant professor in the Department of Animal Science within the College of Agriculture and Natural Resources and a Global Impact Initiative researcher. “If we know the mother is at risk for a preterm birth, her doctor can monitor her more closely.”

Hoffmann’s research was published online June 18 in the Journal Biology of Reproduction.

Hoffmann and her colleagues studied 157 healthy mothers with no history of preterm births, among them 51 who subsequently gave birth preterm. Researchers looked at second trimester data for evidence of biomarkers that could signal preterm delivery.

“How often do you find the needle in the haystack?” Hoffmann said. “We were excited to discover lower mRNA levels in the CRY2 and CLOCK genes.”

The CRY2 and CLOCK genes belong to a family of genes responsible for cell circadian rhythms. Hoffmann said that each human cell has its own 24-hour clock that keeps track of time inside the cell. Low levels of mRNA, or messenger DNA, in those two genes is associated with a higher risk of preterm birth, suggesting these genes provide information as to when labor should start.

Decreased levels of mRNA in the mother's blood become present during the second trimester of pregnancy when most women have an important 20-week prenatal appointment to screen for Down syndrome. This presents the ideal time to also test for the risk of preterm delivery.

The next step is to determine if the CRY2 and CLOCK genes are coming from the mother, placenta or fetus. The researchers also want to see how the mRNA levels in healthy women compare with levels in women with underlying conditions or a history of preterm births to determine if this blood test could be helpful for these at-risk mothers, too.

“If we could measure women’s mRNA levels and tell them for their second or third pregnancies, that they aren’t at risk for a preterm birth because their levels are higher (in a normal/healthy range), that would be such a comfort to the mothers who previously had a preterm birth,” Hoffmann said.

The researchers are also interested in looking at other genes such as another circadian clock gene, called PER3, that in combination with CRY2 and CLOCK levels could indicate other pregnancy complications such a preeclampsia and gestational diabetes.

“If I can help one baby make it to full term who wasn’t supposed to, that would make my day,” said Hoffmann. 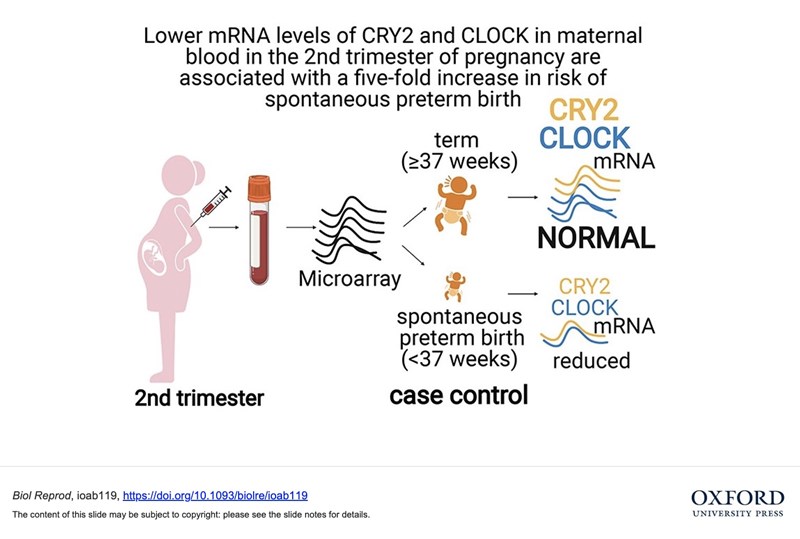