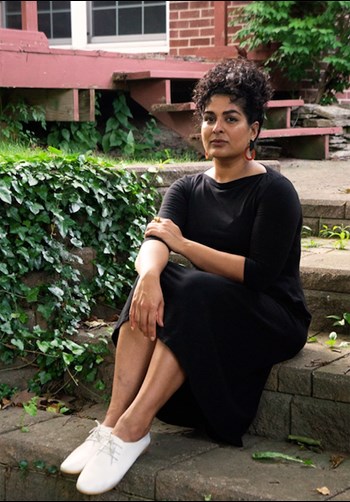 Through my research and latest book, I explore the story of South Asian immigrants and those belonging to the South Asian diaspora, and how they navigate public spaces in the United States. And in doing so, how they maintain and retain a sense of self and a sense of direction, and encounter feelings of fear and displacement.

Titled, “Curb,” and released on April 27, this book comes at a time when hate crimes against Asian Americans have risen by 150% in the United States over the past year, according to the Center for the Study of Hate and Extremism.

So many acts of violence or hate crimes take place because men and women are misrecognized as terrorists or as dangerous to society. I hope this book draws them into greater recognition that they can be seen as humans with lives and loves. I hope my book helps people see the stranger that poses such a threat to this country — the imagined stranger — doesn’t exist. Every person we see as a stranger is actually someone’s loved one. And I hope this book will show people that.

“Every person we see as a stranger is actually someone’s loved one. And I hope this book will show people that.”

Through the use of poetry, I emphasize the risk to nonwhite individuals presumed to be trespassing in white spaces and challenge readers to reconsider the fragile boundaries they share with one another.

I began working on “Curb” in 2017 shortly after I returned from Singapore to the United States, when Donald Trump was just beginning his presidency.

I was taking a walk with my mother when she said to me, “Now that Trump is in office, I’m afraid to even take walks.” I thought about that fear expressed by my very confident, very brave, very bold, immigrant mother. I had to take that fear seriously, and I needed to understand it and imagine where it comes from. I needed to understand and explain to others how that fear had a history, a history that began in the 1800s and has become more refined and more weaponized over time.

In some ways, this is a book about the fear that immigrants live with deep in their hearts, and the ways in which they confront that fear and keep themselves together as they navigate these public spaces.

I chose the title, "Curb," because it’s the dividing element that forms an edge between the road and the sidewalk, which is also used to restrain, to check, to stop, or to arrest.

A curb is a tool that we use to restrain horses to change their direction to rein them in to control them. So, I’m very interested in the ways the nation, state and, now increasingly the militarized police state, curbs the immigrant — how it restrains us, how it prevents certain freedoms, of feeling freedoms, of living freedoms, of being ourselves in this country.

I dedicated this book to the men whose lives were taken from them because of xenophobia, racism and anti-immigrant sentiment, while acknowledging how they were seen as a stranger and as a threat, so monstrous and terrifying, that they were taken out of this world somehow.

It is difficult to estimate the loss of a stranger because it’s pure potential. Often these hate crimes don’t even get reported in the national news. That, to me, became unbearable, and poetry became the way to bear some of that grief. That’s why the book is dedicated to these men. It’s not because I knew them, it’s because I could have known them.