Two fisheries and wildlife undergraduate students designed and built a box that allows bird banding to be performed safely during the novel coronavirus pandemic.

As the novel coronavirus pandemic began shuttering many business operations worldwide in March 2020, uncertainties abounded. There were more questions than answers, from personal and community health concerns to navigating new restrictions in the workplace. 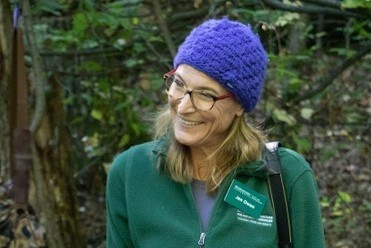 Jen Owen, associate professor in the Department of Fisheries and Wildlife.

Like many scientists, Jen Owen, an associate professor in the Michigan State University Department of Fisheries and Wildlife, endeavored to continue her research uninterrupted. She wondered how it could be done safely to avoid data gaps.

“We have a long-term dataset, and if we took a year off because of the coronavirus, it could leave significant knowledge gaps,” Owen said. “We had to come up with a solution quickly, which increases the pressure on everyone. Thankfully, I have a great group that took on the challenge.”

Owen, who also holds an appointment in the Department of Large Animal Clinical Sciences, and her team study behavior and disease ecology in migratory birds. She has collected more than a decade’s worth of data through bird banding. Using this essential tool, scientists can learn about population size, dispersal, behavior, disease prevalence and life span, among other information.

Necessity is the mother of invention

For the uninitiated, bird banding is a fascinating spectacle to behold, one that requires a keen eye and a practiced hand. The very nature of it complicates safety matters during a global pandemic. That’s because the primary bird handler collecting data must remain maskless.

To identify a bird’s fat storage — a key health indicator — specially trained researchers use their mouths to blow apart feathers, looking for small yellow sacs of fat located underneath. Determining other traits such as sex may necessitate blowing to separate feathers as well.

“This isn’t a normal laboratory situation where I can simply tell people to wear masks and stand six feet apart,” Owen said. “Blowing on the birds is really the only way to determine fat storage, which is one of our most important pieces of information on each bird. It tells us a lot about their overall health and whether they are getting fat enough to make their migratory journey. We had to come up with a way to allow the bander to be maskless while other field staff wearing masks were still around to record data and help with the process.” Owen asked her team for ideas, and what emerged was a practical, elegant solution: Build a three-sided structure in which the bander can sit at a table without a mask. The wooden frame is fitted with plexiglass sides, and a small hole allows for birds to be released after measurements are taken. Two wooden poles with pulleys extend from the back of the box, allowing masked individuals outside to attach bags that each contain a bird. When ready, the bander uses the pulley system to bring the next bird inside. Modifications have been made to improve the design, such as a microphone for communication with those outside of the box. Other bird banding stations have taken notice.

“We posted photos and a description of the box on Facebook and immediately received positive feedback,” Owen said. “We’ve had bird banding stations reach out to us and ask about the design. All stations were concerned about a lost season, so seeing something that allowed us to do the research resonated with them.”

Leading the design efforts for the bird banding box were two fisheries and wildlife undergraduate students, Hannah Landwerlen and Evan Griffis, who each brought excitement and a different skill set to the process.

Landwerlen, who has since graduated with her bachelor’s degree in fisheries and wildlife, was a member of Owen’s research team for the majority of her undergraduate tenure.

As a freshman with her sights set on a degree in zoology and eventually veterinary school, Landwerlen began browsing MSU websites for potential research opportunities.

“I saw a doctoral student of Jen’s working with West Nile virus in American robins. I applied to be a part of that project, and it was the beginning of seeing career possibilities I didn’t know about,” Landwerlen said.

Extracting birds from mist nets was one of the initial tasks to master. She excelled and wanted to know more about birds and the banding process. As a sophomore, Landwerlen became a mist net intern, handling birds for a variety of banding projects. A conversation with Owen prompted a change of major to fisheries and wildlife.

“I’ve learned so much about bird banding and disease ecology from Jen and appreciate working with her,” Landwerlen said. “She had a huge impact on my career choice, which I believe sets me up to do any number of things in the future.” Landwerlen and Griffis in the field. Photo courtesy of Jen Owen and taken prior to pandemic.

Griffis, who grew up in Michigan’s Upper Peninsula, was confident that fisheries and wildlife was the major for him. His enthusiasm for birdwatching began when he was a teenager, rapidly shifting from hobby to career goal.

“The extensive bird research was the initial draw to MSU for me,” said Griffis, now a sophomore. “Being a field technician has allowed me to get involved with all sorts of activities, such as building the banding box. I enjoy building things, so this was a good chance to practice those skills in a very practical way.”

Griffis put his construction expertise on display with his thoughtful design contributions and carpentry acumen. He helped compile a list of needed materials for the banding box and did most of the building alongside Landwerlen.

Owen marvels at the drive shown by Griffis to learn and grow, both as a team member and scientist.

“I’m really fortunate to have talented and passionate students, and Evan is the perfect example of that,” she said. “We couldn’t have made the progress we have with banding…. I am excited that Evan is around for another couple years to contribute to our migratory bird research, but I also really look forward to seeing how his experiences at MSU shape the path he follows after he graduates.”

This story was edited and repurposed and can be viewed in its entirety on the College of Agriculture and Natural Resources website.