Conservation study shows giant pandas would benefit from some discomfort.

In the ongoing quest to understand what makes a good wildlife habitat, surprising new research shows there may be too much of a good thing when it comes to pinpointing optimal conditions. Embracing somewhat reduced standards can be good news to conservation managers.

Research by Michigan State University scientists shows that an animal — in this case a giant panda — should be happy enough to thrive, but not so content they don’t want to move around and find new mates. 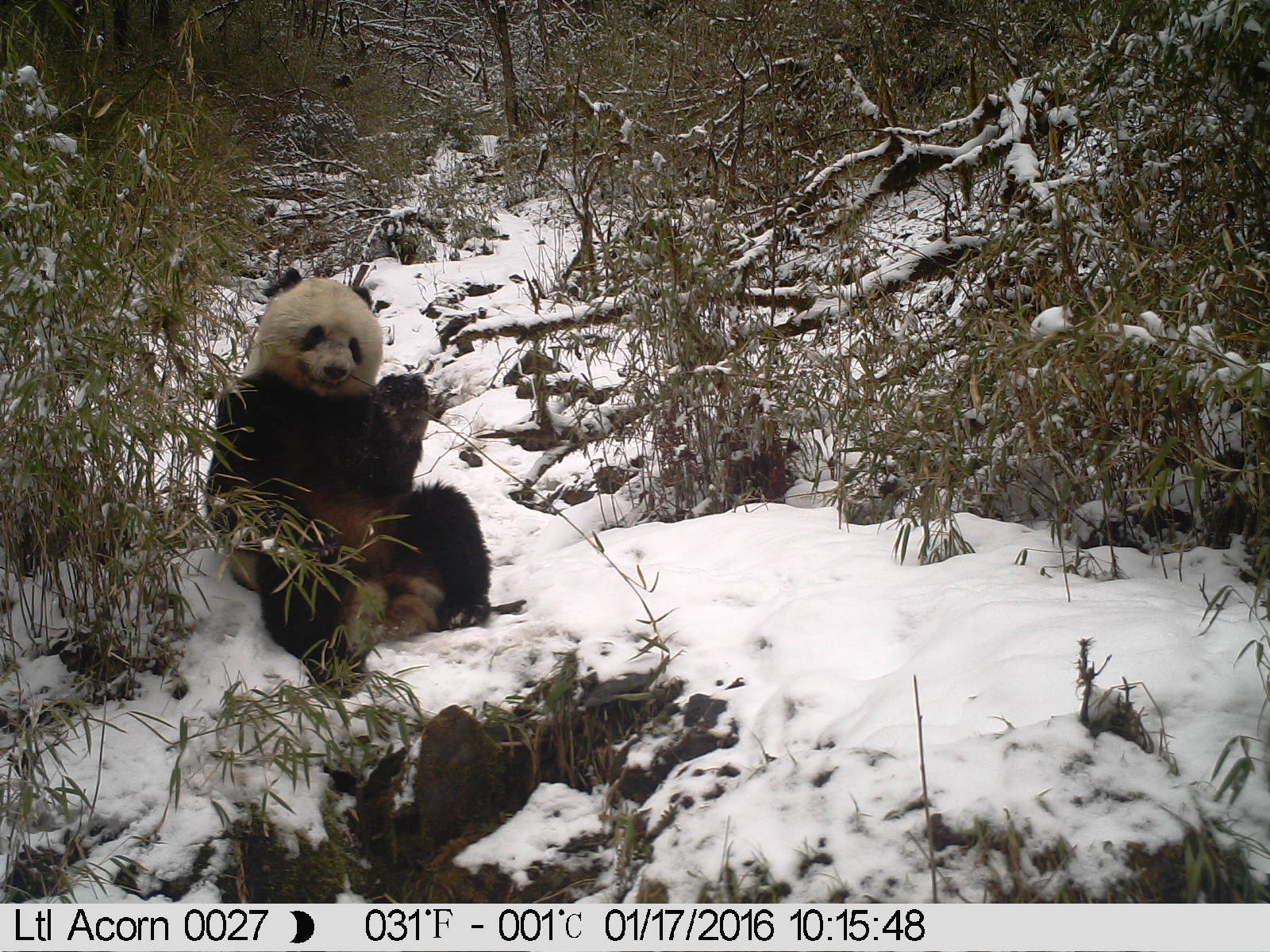 A giant panda contentedly munches bamboo in the snow in China's Wolong Nature Reserve. But are they too content?

The research in this month’s “Conservation Biology” has broader implications — it is not necessary to have 100% of the area as habitat to support pandas and, in fact, pandas would benefit from some unsuitable habitat across the landscape.

“This work provides hope to balance needs for ecological sustainability and human well-being,” said Jianguo “Jack” Liu, Rachel Carson Chair in Sustainability and a paper co-author. “Our results show it is possible for both pandas and humans to thrive across coupled human and natural systems.”

The paper’s lead author Thomas Connor, who recently received his Ph.D. from MSU’s Center for Systems Integration and Sustainability and is a postdoctoral scholar at University of California-Berkeley, shows there’s a balance when it comes to how happy an animal can be.

Managing habitat across the world to ensure wildlife — especially wildlife like giant pandas that are considered threatened — can both thrive and move around enough to ensure good genetic diversity. Scientists across the world have worried about habitat loss and fragmentation leaving animals isolated, eventually using up resources or not being able to find new mates and avoid inbreeding.

Lots of things can break up suitable wildlife habitat — humans build roads or develop properties, wildfires can burn forests, or in the case of pandas, natural cycles result in bamboo flowering and die-off events. Climate change can disrupt habitat too, with previously suitable habitat conditions changing to unsuitable due to changing temperature and precipitation patterns.

Having ways for wildlife to get from one patch of habitat to another help can solve the problem. What Connor and his team notes, however, is a hitch. There seems to be a level at which a slice of panda habitat is so nice that the panda doesn’t have a reason to seek another patch. They found that maximum gene flow in their studies panda population was found not when the entire landscape was habitat, but when about 80% of it was.

“As opposed to the potential interpretation of our results that maximizing the amount of habitat in a landscape can be bad for connectivity, I think that our research suggests a message of hope,” Connor said. “We can effectively manage panda populations by conserving and restoring habitat to intermediate levels. In other words, we don’t have to create perfect habitat to keep protecting pandas.”

Connor said that the pandas’ famous habitat pickiness — their singular reliance on bamboo to eat, their shyness that drives them away from human disturbances, their preferences for shallow slopes and cooler temperatures — means that this study likely has even more relevance for other species.

Besides Connor and Liu, “Complex effects of habitat amount and fragmentation on functional connectivity and inbreeding in a giant panda population” was written by Maiju Qiao, Kim Scribner, Jindong Zhang, Vanessa Hull, Wenke Bai, Ashton Shortridge, Rengui Li and Hemin Zhang. The research was funded by the National Science Foundation.

This story was originally featured on the Center for Systems Integration and Sustainability website.