Walking through the West Circle neighborhood, with its twisting sidewalks, Gothic architecture and old-style streetlamps, is a reminder of Michigan State University’s early years. Exploring the history of the area’s six residence halls reveals the spirit of the Spartan women for whom they're named.

Mary Mayo, leader of Michigan’s rural women and advocate for children, called for the establishment of a women’s course at MSU. She believed the land-grant mission supported equal opportunity to education. Mayo’s determined efforts for the acceptance of women into the college changed the course of MSU history. 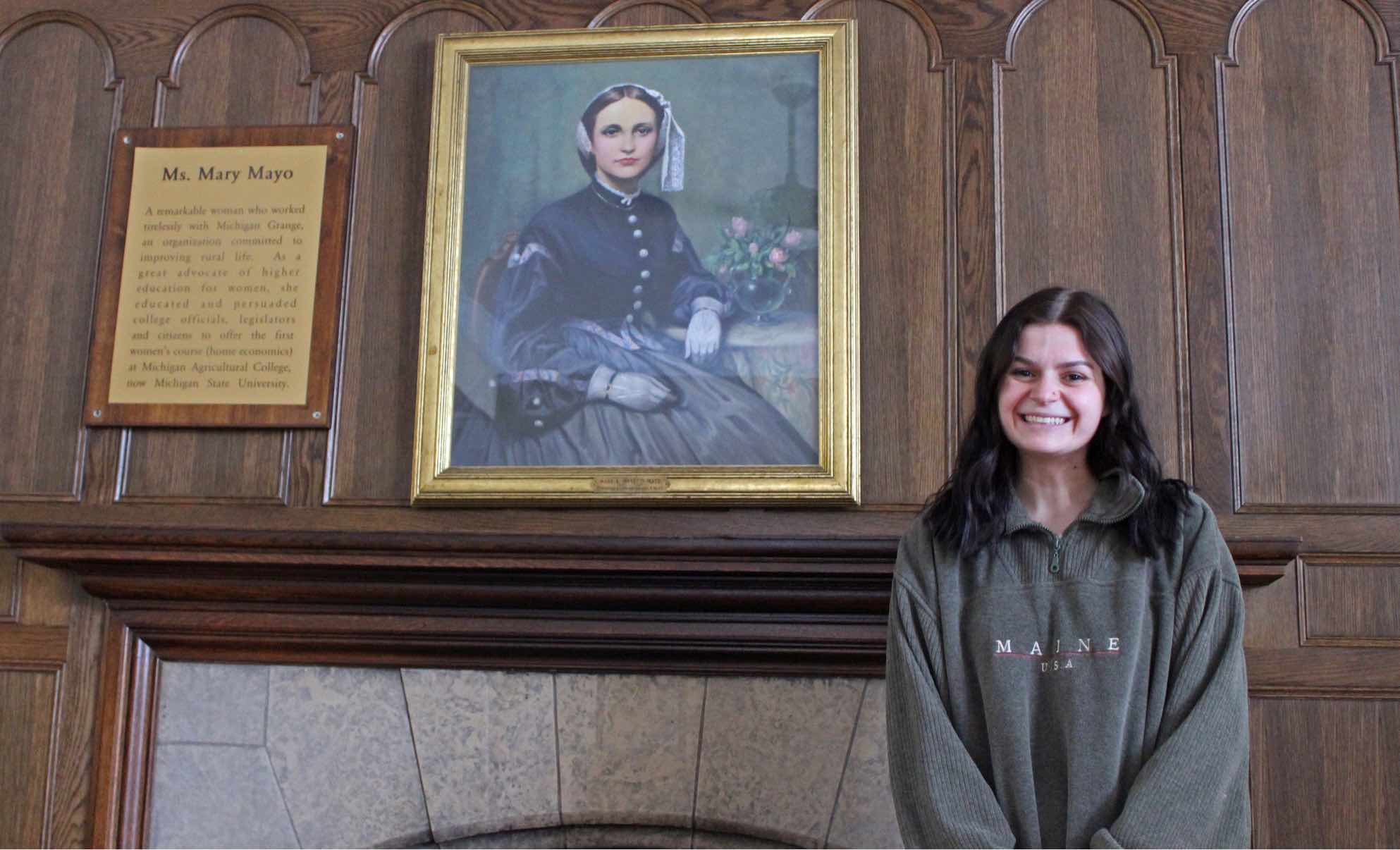 She was known as “Mother Mayo” for her supportive and loving demeanor. “I love everybody so much. I have wanted to make life a little easier, a little more enjoyable,” said Mayo. “I wanted to help people to be kinder, truer, sweeter. And there is so much to do.”

Mayo left a legacy of determination and kindness, and Spartan women like current Mayo Hall resident Zoe Stirrett embody these ideals. “It's such a big school that it can be hard to make your mark, but I would want to be remembered at Michigan State for being a good person — and the people that I’ve met at MSU have continued to shape me into a better person,” says Stirrett.

She also was the head of the home economics extension in the 1920s and introduced the annual Homemaker’s Conference which brought more than 1,000 women to campus each July for a week of cultural and technical education. As the state home demonstration leader, Campbell implemented programs for extension services at MSU.

Linda Landon was the first woman instructor on campus, teaching English and serving as a librarian from 1891 to 1932. During her time as librarian, she facilitated the expansion of the library, doubling the building in size and quadrupling the number of books available for students.

She was a member of the women’s and child studies clubs and an honorary member of the Men’s Union Library Association, and Landon’s active role in library improvement earned her medals of recognition on Alumni Day for 40 years of service to MSU.

In 1912, a copy of “The Wolverine” was dedicated to the “amicable, pleasant little lady who more than anyone else has been tutoring the thousands of students in the art of appreciating, loving and valuing these true friends in life — books.”

Landon left a mark on campus that lives on through the passions and studies of students like social work senior Olivia Reams. “My time at MSU has taught me a lot about everything from friendship to our political system, which inspires me to be an advocate for people," says Reams, who watches the current residents of Landon Hall go about their days from her post at the front desk. 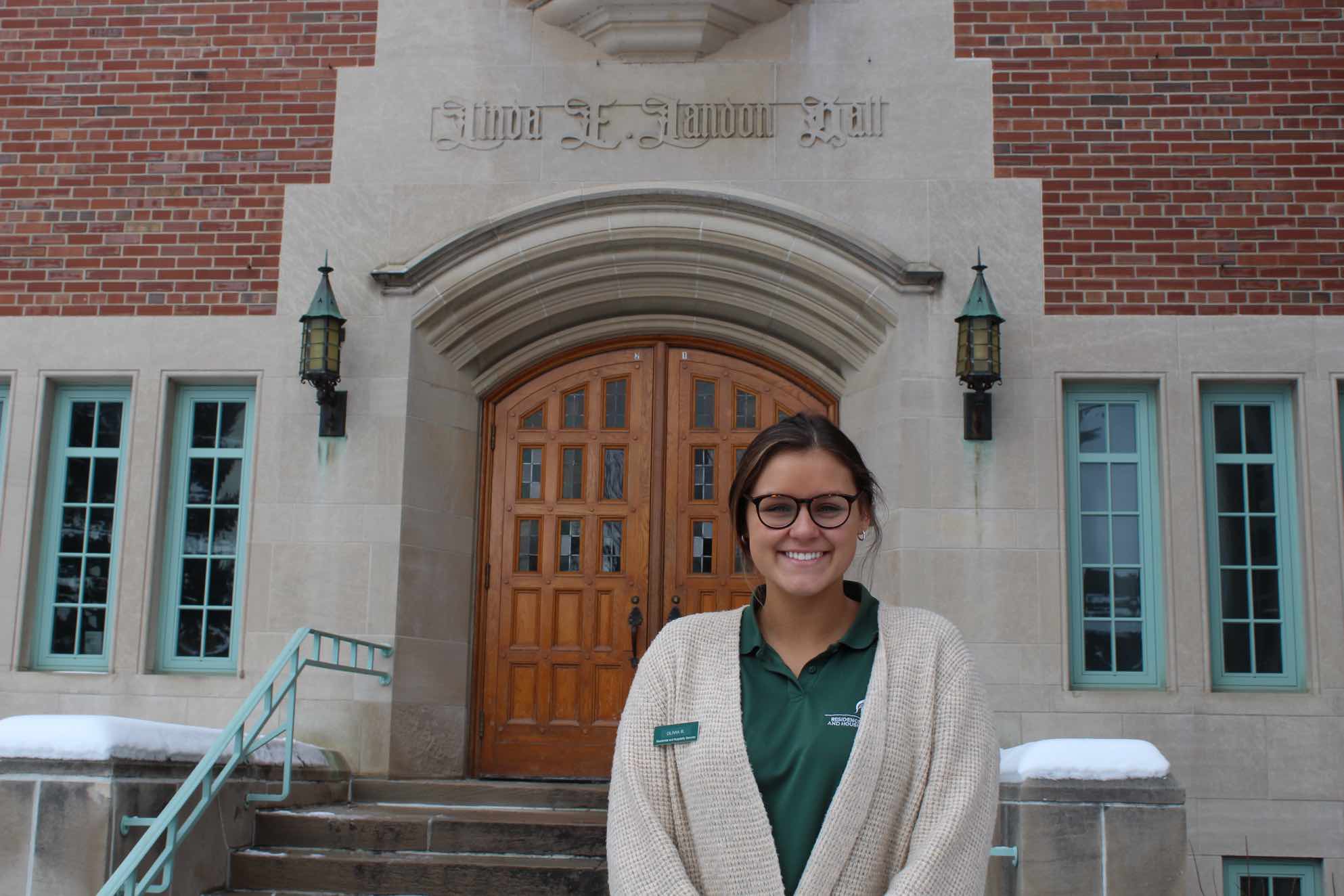 Elida Yakeley served as MSU’s first registrar for 30 years. Her strong relationship with students brought her from the desk of then-President Jonathan L. Snyder's office to the appointed registrar in 1908. She conceived the idea of registering students and inputting grades by machine, but this goal didn’t stop her from knowing nearly every student personally at a time when 500 students registered for classes in agriculture, engineering and the women’s course.

Yakeley kept student academic records, published Michigan Agricultural College’s annual catalog and represented MSU at national meetings. In 1939, she was named associate of historical research, but a more personal honor was her students’ description of Yakeley as a “thoroughly just, broad-hearted friend.”

The respect she earned resulted in a residence hall built in 1948 bearing her name. Yakeley Hall remains the only all-female MSU hall, a fact that would have been appreciated by such a strong female leader. 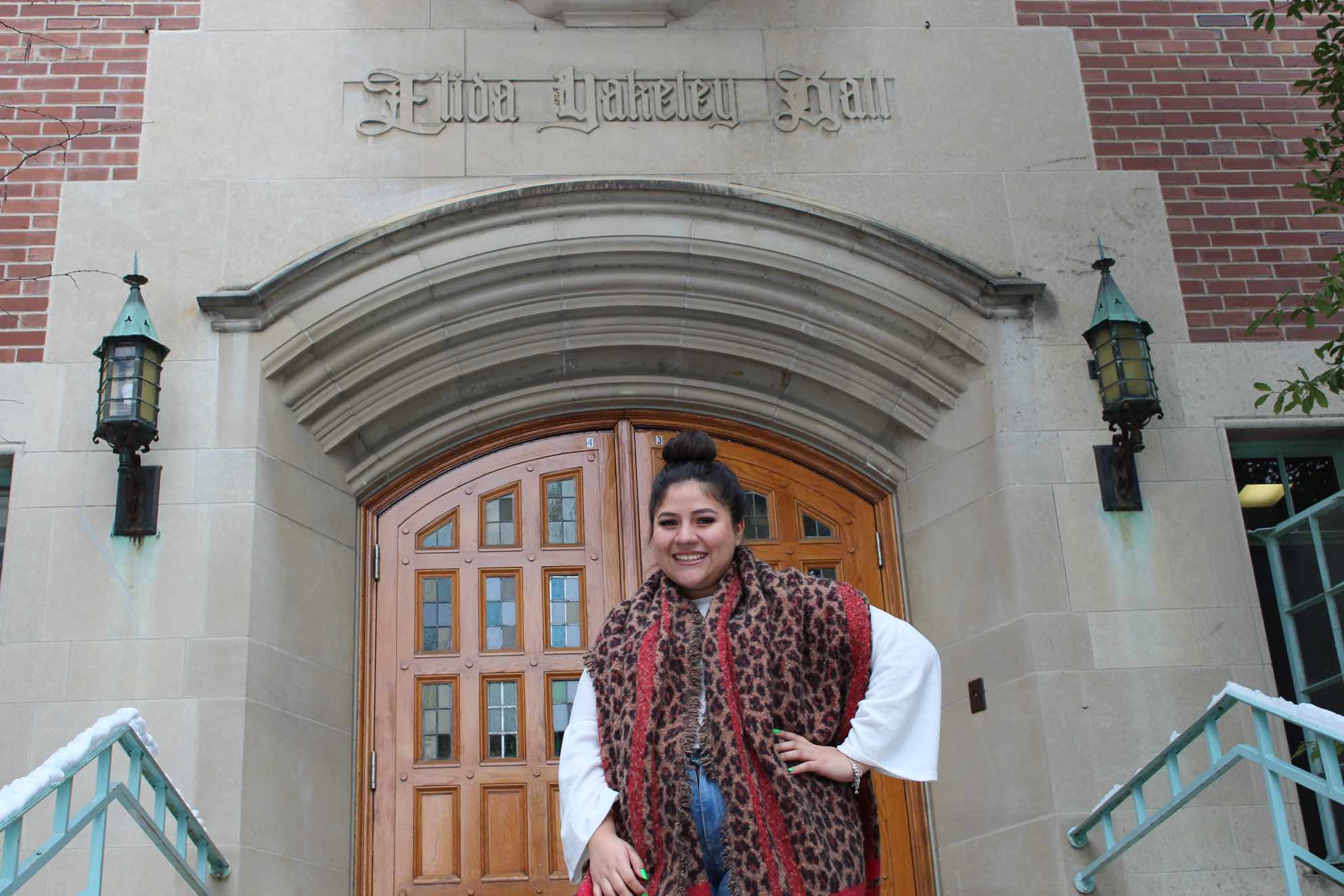 Yakeley Hall resident assistant Alondra Alvarez, a Latinx-rights activist who aspires to be the future mayor of Detroit, also could be described as a “thoroughly just, broad-hearted friend.”

Alvarez commits herself to her residents but also to her position as program facilitator of the MSU Council of Racial and Ethnic Studies Latino student organization. Her main goal is to give first-year Latinx students a sense of community and a place to feel at home at Michigan State.

“One of the biggest things I have given to MSU is my experience as a Latina student from Detroit,” says Alvarez. “Growing up, I knew there was a system in place to hold people of color back, and I learned about it when I was 12 years old. When you’re 12, you’re supposed to play outside or play with dolls, but instead, I was learning about the system and it really opened my eyes and inspired me to help others.”

Alvarez describes herself as a social butterfly who is used to getting out of her comfort zone. Apart from the opportunities MSU has given her, she also has seized the opportunity to bring others in.

“Coming to school was difficult because I didn’t want to turn my back on my community,” says Alvarez. “So I try to incorporate the Detroit community into things I’m involved in.”

Maude Gilchrist was appointed the dean of women in 1901. Her tenacity resulted in doubling the staff and increasing enrollment by 125%. Gilchrist was then tasked with guiding the women's course and later became dean of home economics.

She stood tall among the male deans of agriculture, engineering and veterinary science, tirelessly promoting the work of her division by speaking to women’s clubs, high schools and other public state groups. As an advocate for better education, Gilchrist introduced student teaching into the curriculum to prepare graduates to teach domestic arts and sciences.

Sarah Langdon Williams, who is commonly known as the wife of the first MSU president, Joseph Williams, is remembered for both her humanitarian and environmental contributions.

After saving lives as a Civil War nurse on the frontlines, she saved MSU from the tree stumps and malarial swamps that overtook it when the land was first granted to create the college.

When the boarding hall staff resigned in 1858 because funds were exhausted, she joined students to serve food in Saints’ Rest, the university’s first residence hall, for the remaining four months of the term.

Her legacy extended beyond the boundaries of East Lansing, as she edited “The Ballot Box,” a women’s suffrage paper that made her a key player for women’s rights. Williams Hall opened in 1937 to honor MSU’s first First Lady. 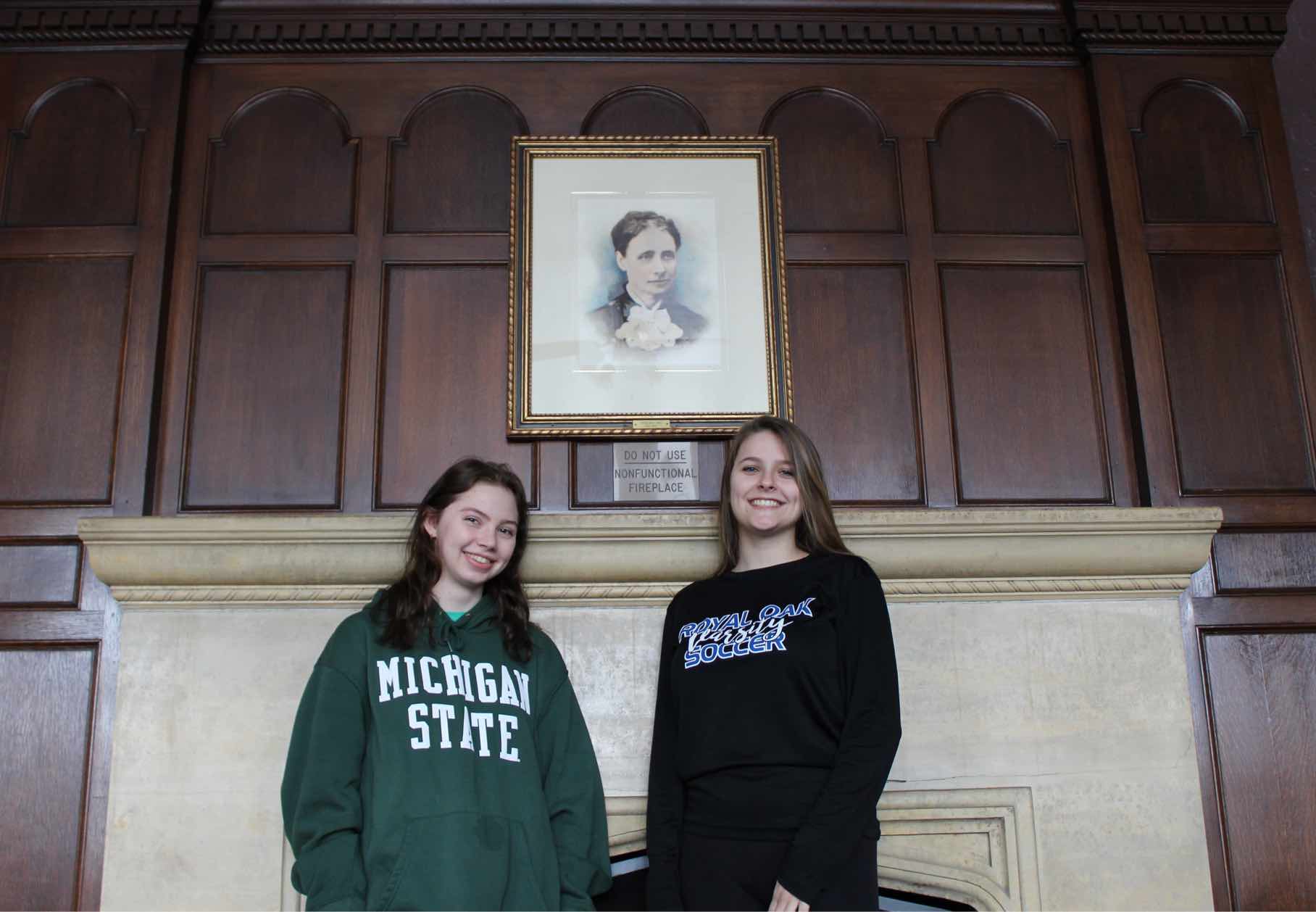 Decades after Williams advocated for women’s rights at MSU and beyond, residents of Williams Hall continue to seize opportunities for change. Sophomores Erin Denby and Elizabeth Kurtz have positively impacted MSU by starting an organization that has also had an impact on them.

“If I had to put what MSU has given me in one word, especially as a transfer student, it would be opportunity,” says Denby. “We have made so many friends and even started our own soccer club.”

“After trying out for the club soccer team, we talked to a lot of girls who got cut,” says Kurtz. “A lot of us still wanted to play the sport we loved, so we reached out to a ton of girls who also wanted to keep this passion in their lives and established a new soccer club.”