Join Canada’s most endeared and revered fiddle power couple Natalie MacMaster and Donnell Leahy, along with their children, for a virtual performance of "A Celtic Family Christmas At Home" at 8 p.m., Friday, Dec. 11.  Every year, "A Celtic Family Christmas" exceeds all expectations with riveting performances. This virtual concert will continue MacMaster and Leahy’s annual tradition, from their home to yours.

Tickets to the virtual performance are on sale now at whartoncenter.com and will be streamed via Homeplay.live. Ticket holders will be able to replay the performance any time from posted show day until the end of the Christmas season, Dec. 27. 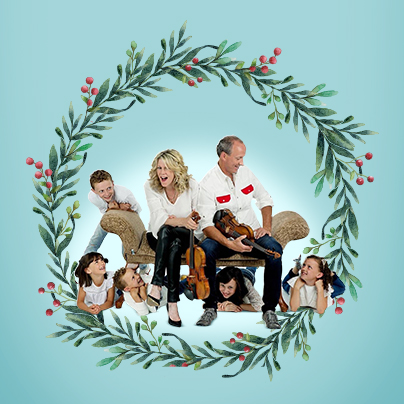 Natalie MacMaster, together with husband Donnell Leahy and their seven children, will be celebrating Christmas virtually this year. For decades, they have toured extensively at Christmas, but this year marks their most unique one, taking the stage to their home. They will spend just over an hour sharing much of their music and culture, Christmas traditions, and general real-life family dynamic in the comfort of their own home. They will share their music, do some dancing, some singing, some baking, talk about Christmas memories past and even have their band join them for a couple of virtual performances. Given their children’s ages and personalities, there will be many candid moments along the way.

With over half a million albums sold, Natalie and Donnell have amassed countless nominations and award wins — including but not limited to Grammy Award win and nomination, JUNO Award wins and eight nominations, 20 East Coast Music Association awards and five Canadian Country Music Association’s “Fiddler of the Year” wins — as well as three honorary doctorates, an induction into the Casino Nova Scotia Hall of Fame and a membership in the Order of Canada.

A Celtic Family Christmas At Home is sponsored by The Doctors Company with additional support from Foster Swift Collins & Swift PC.