Vetschool Tails: Critical use of media when treating an equine patient

Vetschool Tails is an ongoing series detailing the experiences of Spartan veterinarians changing the world for both animals and humans.

Phoenix, a three-year-old female Paint Horse, presented to Michigan State University’s Equine Emergency Service for evaluation and repair of an extensive laceration. The laceration occurred earlier that same day. After being evaluated by her primary care veterinarian, Phoenix was referred to MSU.

On presentation, Phoenix was bright, alert, and responsive. A large laceration over the left lateral body wall was immediately appreciated. It spanned from the caudal thorax, caudally to the haunch. The laceration was not bleeding at the time of admission. Mucous membranes were noted to be pink, moist, with a CRT <2 sec. No abnormalities were noted on thoracic auscultation; air movement was appreciated in both lung fields bilaterally. Phoenix was moderately tachycardic, but no cardiac abnormalities were appreciated. Digital pulses were normal on all limbs. No other significant lacerations were noted. Phoenix was mildly febrile on admission which was attributed to the large wound. 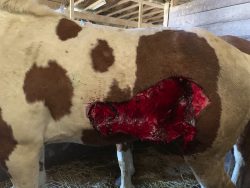 After a thorough exploration of the wound, the Equine Emergency team diagnosed Phoenix with an extensive non-penetrating laceration to the left lateral body wall and quadriceps. 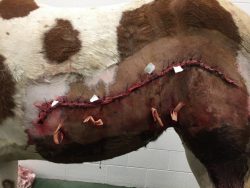 Following presentation and examination, the laceration was debrided and repaired. An IV catheter was placed in the left jugular vein. Phoenix received IV fluid therapy for 12 hours (LRS with a Lidocaine 2% CRI), as well as antimicrobials and non-steroidal anti-inflammatory drugs (NSAID) to manage the pain and prevent infection.

After wound repair, Phoenix recovered well. Her fever resolved with the antimicrobials and anti-inflammatories. The wound repair remained intact and began to heal well. There was swelling over the left stifle, which began to progressively decrease. A mild amount of edema remained along the ventral body wall, but this was expected and did gradually resolve. Drains were placed in the wound during the repair and removed before discharge. Phoenix remained under observation at the Hospital for four days, with minimal complications.

On discharge, Phoenix’s owner was given specific care instructions regarding wound monitoring and care, medications, and exercise. A recheck examination was recommended for 12–14 days later.

Throughout the next two weeks, Phoenix’s owner and Dr. Colbath communicated using daily phone calls, text messages, and exchanges of videos and pictures to monitor healing and provide treatment alterations. A large pocket was developing on the caudal aspect of the wound in an area above the stifle, which had a great deal of movement and where the previous drain holes had closed rapidly. In addition, a few areas of dehiscence had developed along the caudal suture line. Video communication allowed Dr. Colbath to assess how this area was progressing and choose an appropriate time for Phoenix to return to the Hospital for follow-up care. 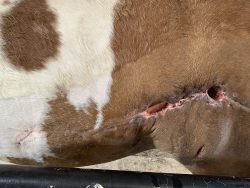 Three-weeks post-discharge, Phoenix returned to the Hospital’s Equine Surgery Service. Phoenix had received antibiotics orally twice a day (SMZ, 15 tabs). In addition, the owner had lavaged through the dehiscence sites 3 times a day and added a hot pack to the area of caudal swelling. During the recheck visit, Phoenix was sedated with a total of 5 mg of Detomidine and the suture line was cleaned (with chlorohexadine and alcohol) prior to removing all sutures cranial to the first region of dehiscence.

There were 2 areas of suture dehiscence of 2–3 inches in length and approximately 8–10 inches apart in the caudal flank. The sutures were left in between the 2 areas of dehiscence, as there was a large area of dead space in this region. The remainder of the cranial suture line had healed well.

To facilitate drainage from the area of dead space (approximately 8 inches in diameter below the area of dehiscence), a new vertical incision was made in the most distal area of the. Manual palpation was used to verify that all skin openings (2 regions of dehiscence and the new ventral incision) communicated. A small skin vessel was ligated with 3–0 Monocryl (absorbable suture that does not need to be removed). The dead space was cleaned with sponges, and a large sterile gauze soaked in hypertonic saline (five feet long) was packed into the dead space. 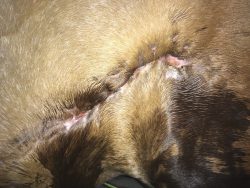 The owner was instructed to remove the packing the following evening and to continue to flush the region three times per day with dilute betadine solution. In addition, it was advised that the owner continue to hot pack the distal area (where a hematoma had been present) and to continue Phoenix on twice-a-day SMZ as previously prescribed.

Over the next several weeks, Phoenix’s owner remained in contact with Dr. Colbath, who was able to continue to advise care of Phoenix after reviewing video messages and pictures. Phoenix’s wound healed completely with minimal scarring, and Phoenix returned to exercise within three months of the original injury. Phoenix has since been able to return to competition less than four months following the injury.

It is not surprising that the region where Phoenix was lacerated was slower to heal, as it has greater movement and the drain holes initially placed had closed rapidly. Despite some areas of dehiscence, the Equine Surgery team was pleased with the wound healing at the time of discharge. 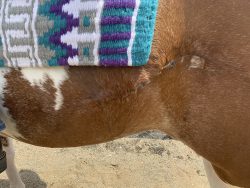 Management of this case was complicated by COVID-19 regulations, which didn’t allow face-to-face communication and limited the availability of routine care in the field. The use of video and picture messaging and frequent communication was essential to allow Phoenix’s owner to change treatments as needed throughout Phoenix’s healing process. Regular and robust communication was critical to Phoenix’s case and played a large part in the successful outcome.