Two Michigan State University students are celebrating national honors as they have been named Marshall and Mitchell scholars, respectively.

Brent Strong, an Honors College senior majoring in physiology in the College of Natural Science, is the 20th Marshall Scholar from MSU.

Maysa Sitar, an Honors College senior and Social Science Scholar, is just the fifth Spartan to be named a Mitchell Scholar.

Both scholarships are highly competitive and provide postgraduate study to recipients. This year 46 Marshall Scholars were selected from 1,180 applicants from 35 institutions around the country. The George J. Mitchell Scholarship is awarded to 12 undergraduates nationwide by the U.S.-Ireland Alliance and funds a year of study in Ireland.

“Maysa is more than deserving, as she has not only excelled in all her classes, but has also undertaken independent research projects while devoting thousands of hours to community service, campus leadership and high-level roles demanding the highest level of professionalism," said John Waller, director of the Social Science Scholars Program in the College of Social Science. 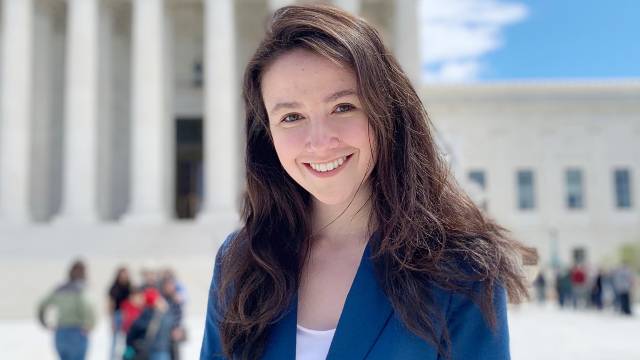 Sitar, a native of Newberry, Michigan, plans to study conflict transformation and social justice at Queen’s University Belfast. She is a political science major and current vice president for governmental affairs for MSU’s student government and recently helped double residence hall voter registration efforts and created nonpartisan voting guides for students. She also has worked in the Washington, D.C., office of Rep. Elissa Slotkin and serves on a task force that focuses on voting challenges for college-aged students. Sitar came to MSU as a STARR scholar — an award specifically for high school seniors from Michigan’s Upper Peninsula and Wyoming state — and was a finalist for the U.S. Rhodes Scholarship.

The Marshall Commission provides support for up to 50 of the most outstanding undergraduates in the country to study at any university in the United Kingdom. Marshall Scholarships pay tuition and fees, personal travel, book allowances and a living stipend for up to three years of study. Brent Strong, Marshall scholar
Strong, a native of Saline, Michigan, and a Dean’s Research Scholar, plans to pursue a Master of Science in statistics at the University of Glasgow in his first year, and a Master of Science in population health sciences at the University of Edinburgh in his second year. Strong credits his research alongside mentor Mat Reeves, professor in the Department of Epidemiology and Biostatistics, as the guiding force in helping him discover a passion for improving care and outcomes for stroke patients.

“Being named a Marshall Scholar is a great honor, and I am ecstatic to continue my study of epidemiology and acute stroke in Scotland for two years,” Strong said.